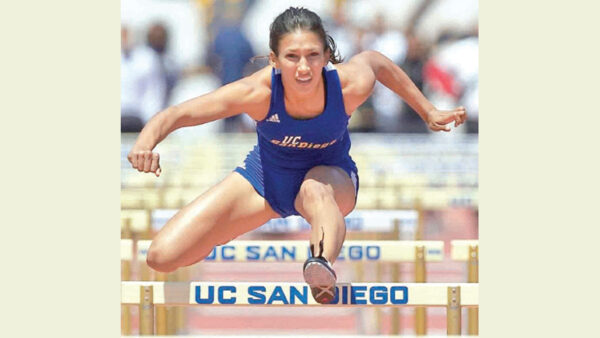 Christine Sonali Merrill is a former Sri Lankan athlete who competed in the Women’s 400m hurdles event at the 2012 Summer Olympic Games in London, UK.

She was ranked 30th and was eliminated in the first round though she broke her own seasonal record with a time of 57.15s. Her personal best of 56.45s also ranks as the national record of Sri Lanka.

Christine was born on August 20, 1987 in California, US and represented the country in the 400m hurdles at the 2012 Olympic Games.

Her National record in this event was 56.45s. She graduated from the California University with a Degree in engineering and also represented the University in several events.

She won the 400m hurdles event at the NCAA Division Two Championship, participated in the 2011 World Championships and won a Bronze Medal at the Asian Championships in the same year.

Christine took up athletics when she changed high schools as a junior, leaving behind a school that lacked a track to practice on.

She had some success at the local and state levels but after being accepted by the University of California, San Diego and learning that they did not offer athletic scholarships, she decided to focus on her mechanical engineering major instead, especially after suffering a knee injury during a basketball game.

She was eventually convinced to compete for the school, however, collecting eight All-American honours and winning the 400m hurdles event at the Division II National Collegiate Athletic Association as a junior.

The following year, 2010, she set a school record in the event and graduated but decided to continue her pursuit of athletics, spending her own money and free time training while also working as an engineer with a solar turbine company in San Diego.

On the basis of her mother’s ancestry, she began competing for Sri Lanka and won a Bronze Medal in the 400m hurdles at the 2011 Asian Championships.

She also competed at that year’s World Championships, where she was eliminated in the heats. She was then selected as a wildcard entrant by Sri Lanka and ran for Sri Lanka at the 2012 Summer Olympics, where she finished last in her heat of the 400m hurdles and was eliminated, despite running her best time of the season.

Christine, of course, had a good preparation ahead of the 2012 Olympic Games and had the opportunity of participating in two international events against some of the elite in this event.

She narrowly missed the Bronze Medal at the Jamaican Championships in Kingston where she returned a time of 57.89s and clocked 58.42s at the KBC Night of Athletics Meet in Belgium. Before that, she clinched the Bronze Medal at the Bangkok Asian Grand Prix in May, 2012 with a time of 58.20s and secured fourth place at the Kanchanaburi Asian Grand Prix also in Thailand.

Although she was specialised in the 400m hurdles event for her country, Christine also participated in the 100m, 200m, 100m hurdles, 4X100m relay and 4X400m relay events as well.