Questions are being raised about a new mobile app which tracks, records and scores how well people drive. 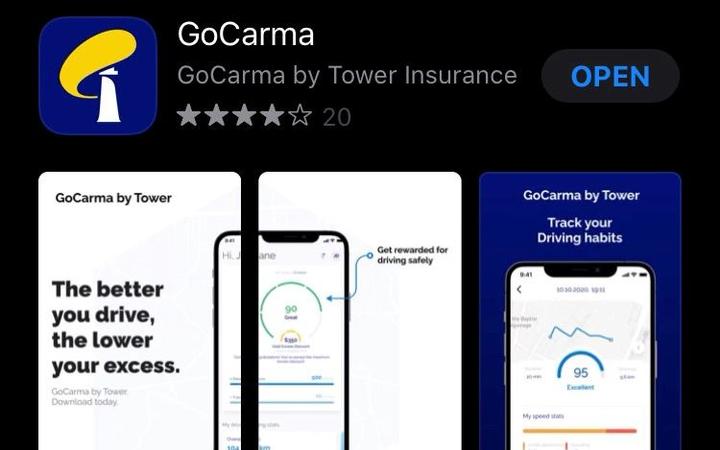 Tower said its GoCarma app is a way for drivers to potentially lower their insurance excess, but critics warn it intrudes on privacy and it is unclear who is really getting the benefit.
Photo: Screenshot

Insurance company Tower has launched GoCarma which monitors people’s driving habits, from how they brake to how often they check their phone.

Tower said the app is a way for people to measure their driving ability and potentially lower their insurance excess.

However, critics warn the app intrudes on people’s privacy and it is unclear who is really getting the benefits.

Once downloaded, the GoCarma app is connected to the car by Bluetooth and uses the driver’s smartphone to track how they accelerate, brake and corner.

Tower head of propositions Sally Gordon said the purpose of the app is to raise driving standards.

“At the moment there is no way for drivers to get feedback on how well they drive.

“We’ve done a little bit of research and found that 9 out of 10 New Zealanders think that they are good drivers.

“But actually the reality is most people could improve their driving.”

For every trip completed, the driver is scored out of 100 based on a range of factors, such as how smoothly they accelerated or applied the brakes.

Gordon said the app would not be used to set the premiums of its customers but they might be rewarded for safe driving by reducing the excess on their policies.

She accepted the app has limitations and could not differentiate between defensive and aggressive driving, such as braking hard to avoid a collision.

Gordon said such an event would affect the score of that ride, but scores would be aggregated over 12 weeks, which would give a more accurate representation of someone’s ability.

The head of the New Zealand Institute of Driver Educators, Peter Sheppard, said any data allowing people to measure how they drive was valuable, but similar technology used overseas had raised questions about who benefitted.

“We’ve found in some cases where [the] thresholds have been set more for the purpose of the organisation using the equipment rather than the individual who is being reported on.”

He said driver monitoring technology had the potential to have the opposite effect, and slow drivers right down which could affect others on the road.

“You don’t want the tail wagging the dog.”

Law professor and privacy expert Gehan Gunasekara said this technology should not be rejected, but people who used it must see it for what it was – a form of surveillance.

“It is surveillance because it may be serving a function where it gives you feedback and you can improve your driving but it’s also feeding information to the company that’s providing the service.”

Tower said the data collected would be held by them and not shared with any other party, except the police if it is requested.

Gunasekera said that was to be expected, but the technology foreshadowed a future where everyone is rated and human behaviour standardised.

“What’s happened to the individual in all this? As long as you are safe on the road does it matter that you have slightly different habits than somebody else?”

He said he would like to see more transparency around the app’s inputs, to test its accuracy and its effectiveness.

GoCarma is currently being rolled out and will be reviewed in the new year.

Tower said it had no immediate plans to make the app mandatory for customers nor use it to determine premiums.