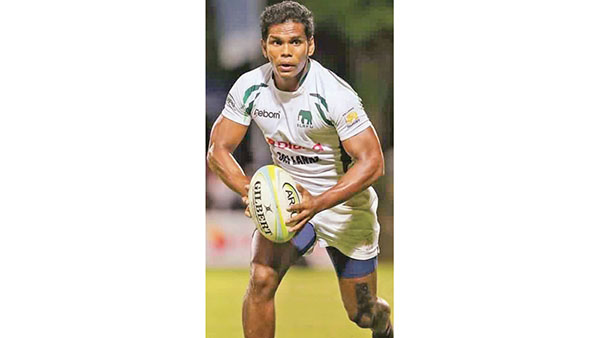 Fly half Fazil Marija, one of the finest rugby players produced by Kandy Sports Club in the last two decades started playing rugby at the age of 10 years at his Alma Mater, Kingswood College,Kandy under the Coaches, A.C.Tennakoon, former Police Rugby Player Asela Muthumala and Hettiarachchi.

He played for Kingswood throughout his rugby career from Under 13 to Under 19 from 1995 to 2004 and led his School team in the year 2004 to become All Island Champions in the Schools seven-a-side League and 15 side knock out tournaments. At that time the best players of his team were Mohammed Jabar, Maduka Tennakoon, and Achala Perera to name a few and they played tirelessly to become All Island School champions.

Fazil had the privilege of representing Sri Lanka Rugby team at the age of 17 years when he was a school boy. From there onwards he continued to play for the National team in the Rugby Sevens as well as the National Rugby Fifteen from 2005 to 2015. During that period Fazil was leading the country in the Rugby Sevens and Fifteen a side , As a leading player he took part at the Hongkong Sevens in 2005, 2006 and 2007. In addition he represented the National Rugby Fifteen team at the Commonwealth Games in Australia and Scotland and also Asian Games in Doha, Qatar and Korea. Fazil was in the Champion Kandy SC Rugby team which won the League and Clifford Cup Knock-out Tournaments from 2004 to 2018 except the 2012 and 2013 League Championships.

After serving the Champion Kandy SC Rugby team for more than one and half decades Fazil started coaching Rugby as Kandy SC’s Head Coach having qualified as a IRB level 1 and 2 coach and he is also having SNC Qualifications and had the privilege of following a Rugby coaching course in South Africa in 2018 and Ireland in 2019. Rugby loving public is expecting a lot from his coaching and he is grateful to Malik Samarawickrema for the support and encouragement given to him throughout his career.

Fazil learnt the game of Rugby playing with his brother, Faizal and cousins Amjad Buksh, Nilufer Ibrahim and Ronnie Ibrahim. All these Rugby players represented Sri Lanka later in their careers.