I remember the old poem Anguru kaka, watura bibi, kolomba dhuwana yakada yaka, very well. It seems like yesterday, really, and brings back many memories of the old Steam Trains, the Moratuwa Railway Station, a mere stone’s throw away from where I lived, as a toddler, where these magnificent Steam Trains used to have their bellies filled with water from the huge steel tanks (pictured), via equally huge rubber hoses, then, especially as it was just getting dark, we would hear the distinct whistle, as the train driver indicated that he was leaving the Station. Brother Ian was about a year old, and I was just four in 1940, when we were treated to a “firework-show” at eventide each evening, when, out of it’s main smoke turret at the front of the engine, a shower of sparks would burst forth, giving us a “show” that many would pay to see. The engine driver would do the easy part of simply driving the train. If was the second guy on board the engine, the fireman, who had the difficult physical job of shoving showels of coal into the engine furnace to keep the steam up, and the train going. I remember that it was a special kind of music, to hear the “chug-a-lug” of the engine wheels, slowly, at first, then gathering speed, as it left the Station.

The C.G.R. was a large part of our life.  My uncles, on my Mother’s side, the Demmers were all respected members of The Ceylon Government Railway. Alan Demmer was on the Senior Executive Staff, as I remember,

my Uncles Hugh & Roy started off as Railway Guards, and both ended up as Senior Ticket-Inspectors, Another Engine driver, this time, was an Uncle on my Dad’s side, Fred de Kretser, who was kind enough to get me aboard his engine, when I was slightly older, and give me my memorable first trip on his train, watching in wonder, as he and his fireman took us all the way from Moratuwa to Nuwara Eliya. If I remember correctly, at one point, when the old train had to start it’s steep ascent into the hill-country, while Uncle Fred still managed the engine ahead of about eight or ten carriages, another engine had to be connected to the rear of the train to “help” us to get to Nuwara Eliya.  If the second Engine driver had not agreed to do this, I would not be writing this story right now.

The lost glory of the KV railway Line: Story and photos by Mahil Wijesinghe

‘Anguru Kaka Wathura Bibi Kolamba Duwana Yakada Yaka’ this is a famous phrase of a popular poem we sang when we were schoolchildren as the trains of that time were mainly steam powered by coal and water, before the diesel train engines were introduced to the Ceylon Government Railway (CGR) then, and now, the Sri Lanka Railway. As proof of the above poem, to date, there is an iconic landmark of an old black rounded water tank belonging to the Kelani Valley railway track, standing majestically at the Avissawella Railway Station. I had a cherished ambition to explore these ruined stations along the abandoned Kelani Valley railway lines of Yatiyantota and Opanayaka. First of all, I travelled along Avissavella to Opanayaka and discovered the amazing lost glory of the KV railway track. The old stations situated in towns are, Getahetta, Eheliyagoda, Parakaduwa, Kuruwita, Ratnapura, Tiriwanaketiya, Dela, Watapota, Kahawatta and Opanayaka station terminus. The Kelani Valley Railway, popularly known as the KV Line, holds a unique position in the 145-year long history of the Sri Lanka Railway, which was originally built as a 2ft 6 in narrow-gauge line to transport goods, between Avissawella and Yatiyantota. During the narrow-gauge era, the line had its own fleet of narrow-gauge locomotives, where steam locomotives of Class K were used.

The European planters in the Kelani Valley and Sabaragamuwa have been agitating for a railway line since the successful completion of the railway to Kandy, in 1867. This resulted in building the KV Line, at first from Colombo to Yatiyantota via Avissawella during 1900-1902. Avissawella is only 37 metres above sea level, but one gets a sense of being deep in Sri Lanka’s hill country. Its station is the terminus for the KV Line, although the train used to run to Opanayaka via Ratnapura, the city of gems. Now, we have to travel there by road. Avissavella is also an important town in the KV Line and an important junction station for the railway where the line from Colombo branched off to Yatiyantota and Opanayaka, which was extended up to Ratnapura, completed in 1912, and eventually extended to Opanayaka in 1919.

The KV Line is Sri Lanka’s only narrow-gauge railway, a mere 76cm wide. A survivor of a more leisurely age, it was opened in 1912 up to Ratnapura, primarily to transport the Valley’s agricultural produce to Colombo by British planters. Since the transport of coffee, tea, rubber, cinnamon and coconut, then the main crops of the island, from the plantations around the Ratnapura and Kegalla districts to Colombo, for shipment to Britain took long, thereby adversely affecting the plantation industry, the colonial British planters wanted the railway. During the rule of British Governor Sir Henry McCallum (1907-1913), the KV railway line expanded up to Ratnapura having branched off from Avissawella as a narrow-gauge line to transport agricultural crops. Again, in 1912 the railway line was connected from Ratnapura town to Opanayaka, around 20 kilometres from Ratnapura, which was the terminus of the line. However, the main stretch from Fort to Opanayaka via Avissawella was shortened up to Ratnapura during WW11, by the British rulers due to the lack of revenues way back in 1947. Eventually, the Ratnapura to Avissawella track closed down in 1976. Subsequently, the line was further extended to Avissawella and finally to Homagama. The main reason for the extinction of the narrow-gauge railway was the lack of speedy operations due to the sharp regular curves along the line. Once again, the broad-gauge line from Colombo was introduced to the KV Line up to Avissawella, in 1993. The railway line beyond was completely abandoned, and now the line from Avissawella to Yatiyantota and along the way to Opanayaka can only be traced by the remaining ruined stations, huge iron bridges, old telephone posts and stone arched-culverts. At present, the terminus railway station of Opanayaka has been housed at the Police Station of Opanayaka of the Sri Lanka Police Department and the old building is considered as a most exquisite ruined architectural monument within the Sabaragamuwa Province.

The old railway station in the Ratnapura town was converted into the present bus stand in 1976. Although the old buildings of the railway station are still used with some modifications, the old grandeur of the railway station is still visible from the remaining old iron-roof with rounded iron beams. I walked a few kilometres further along the old railway track (today villagers called it ‘Railpaara’) from Ratnapura towards Opanayaka and came across an amazing construction of the British builders during the heyday of the railway line. At Warakathota off Ratnapura town, on the KV railway line, I discovered a fascinating monument of an iron bridge across the Kalu Ganga still intact, standing majestically as a monument, without any damage even though mother nature caused many disasters in the area. 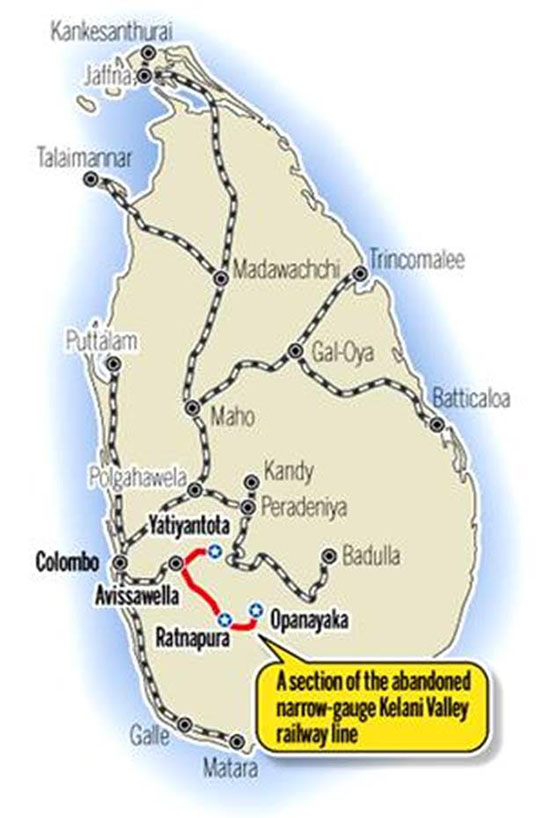 At Ratnapura, I met an elderly citizen, I. D. Wijeratna, (90) a former Telecommunication technician attached to the Ratnapura Telecommunication office, who vividly recollected his past experience of his KV train ride. “Those days, we had a train pass and whenever there was a breakdown on the telephone lines, (telephone lines always go parallel to the railway line) we had to travel by train from Ratnapura to the nearest station and look into the matter urgently. It was a most enjoyable working environment in those days, way back in 1950”, Wijeratna reminisced. The railway line then ran towards Opanayaka passing the Dela Railway Station and reached Hunuwala town crossing Kahawatta where the iron railway bridge of Hunuwala was still used for road transport. What a marvellous sight, how this historic monument of the bygone era of the Kelani Valley railway track is still used for road transport. When the rail track was abandoned from Avissawella to Opanayaka, there was a massive land-grab of the property along the railway line to dig for gems and to put up houses and even commercial establishments. Quite a lot of houses are now built illegally on this stretch. It is tragic to note how people uprooted all the iron bars of the narrow-gauge KV railway line and sold them to dealers. Although people live in these houses, it seemed that they live with eternal trepidation all the time. For instance, when we photographed an old station at Getaheatta which is one of the prominent stations after Avissawella, now in a dilapidated condition, an elderly woman living close to the station, approached us and asked ‘Mahatthela CGR ekenda?’ (Are you from the CGR?) We said no, we were taking photographs of these old buildings for posterity. Then she left us in peace. 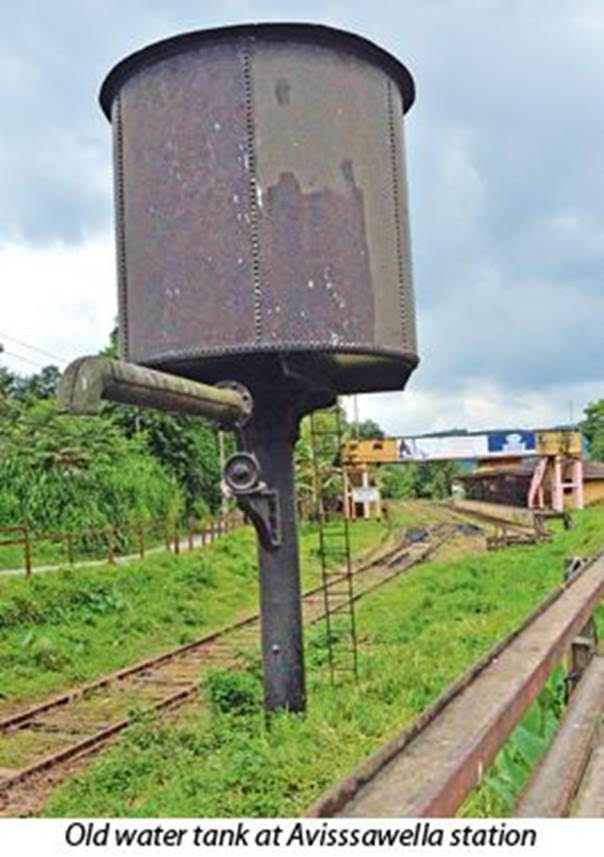 We experience much emotion when we see these monuments of the old arch-culverts, iron bridges and former railway stations in this track and feel strongly that they should be protected without delay as archaeological monuments for future generations to observe the hard work toiled by the Sinhala labourers with British engineers to build this marvellous railway track. Probably, the KV Line is also the second narrow-gauge railway track built connecting the hill country, and the first ever railway line that has been lost to the nation. To view more monuments of a by gone era of the KV Line, we then stepped into the Railway Museum at the Sri Lanka Railway headquarters in Maradana which was the first railway station built in the country, before it was shifted to the Colombo Fort Station. It exhibits many railway items used in the past, especially, from the inception of the railway in the country, in 1865. At the museum, our attention was drawn to the items used in the KV Line such as, locomotive steam train engines, graders, jacks and old signal systems. It is a must-see place for those who wish to research on the old days of the railway system in Sri Lanka.