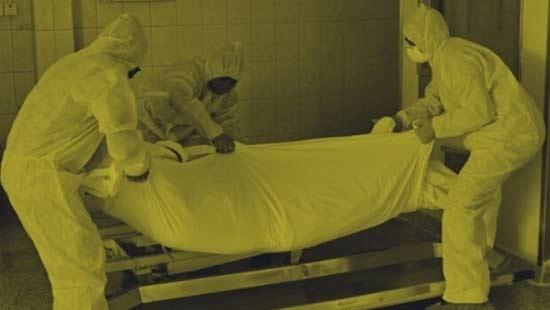 The body of the Sri Lankan migrant worker Bandu who died of coronavirus in Dubai, United Arab Emirates — far from home — was kept inside the ambulance in front of the crematorium. A few of his work friends came by for a last goodbye. In silence, the body, wrapped in a white plastic bag, was reduced to ashes in a matter of minutes.

More than one million Sri Lankans work in 14 labor destinations including Gulf nations, becoming the backbone of the workforce of many wealthy nations, while also being the major source of foreign income in their motherland.

Many have endured decades of sweat and tears to provide for their families, with the hope of returning one day to build a house, to start a family and just to ease their financial struggles. But, for sixty seven Sri Lankan migrant workers returning home was not a reality, this year.

Thousands of migrant workers who were already struggling with low wages, lack of job security and social protection, are now suffering the worst effects of the pandemic. Many have lost jobs, accommodation and even have contracted the virus.

A death from coronavirus means that the body cannot be sent home, and that it has to be cremated or buried in the country where the person dies. As per latest data, 67 Sri Lankan workers have died due to the Coronavirus. As the transportation of deceased workers has been halted due to the disruption of regular international flights, repatriation of these workers who died abroad has been directly affected. 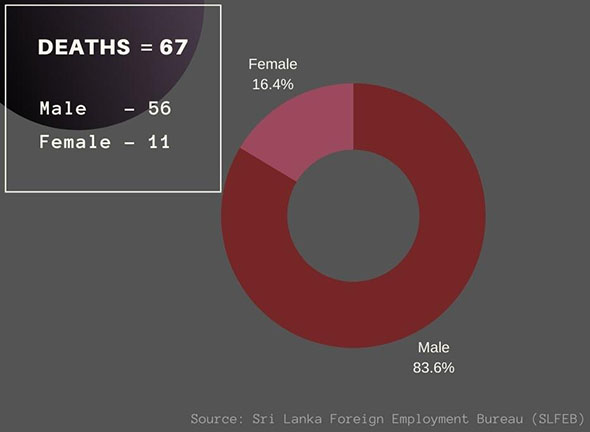 Bringing bodies from abroad carries the risk of coronavirus infection through the coffins used during transportation. Owing to the current situation, it has made it difficult to bring their bodies back home. Therefore, following the request from the government, families of deceased workers have started giving their consent to perform the final rites in the countries where they had been working.

Sri Lanka Foreign Employment Bureau (SLFEB) Spokesman Mangala Randeniya said; “considering the time it might take for bringing the bodies’ home, we started contacting families on allowing cremation abroad. Once they agreed, they gave an affidavit and then they were sent to Sri Lankan missions abroad for performing the final rites.”

Bandu Fernando has been a migrant worker in Dubai for twenty years. He was working as a labour in a restaurant when he unfortunetly got exposed to the virus. His family in Koralawella, Moratuwa is devastated as they could not even see Bandu for the last time. Sharing their agony, the widow Nishanthi Fernando said she and her children still could not wrap their heads around the loss.

“He was planning to come to Sri Lanka in May for a family occasion. We had so many plans for his visit. When he was not feeling well, he informed us. We kept in touch with him throughout the journey. It was good that he had friends with him in Dubai as he had been working there for two decades.”

“Foreign bureau officials informed us regarding the situation. We realized that we had been left with no option but to allow his final rites in the destination. The pandemic snatched the most important thing in my life,” Nishanthi said, wiping the tears from her cheeks.

Duty of the government and the COVID crisis

According to the SLFEB, the government authority responsible for providing financial assistance to the aggrieved families, an insurance compensation of Rs. 500, 000 will be paid to migrant workers who have registered with the SLBFE and died while being employed abroad.

This compensation has been increased to Rs. 600,000 for those who registered after March 16, 2020 and went abroad. The amount paid for the religious rites of the deceased was earlier Rs. 30,000 and it has been increased by Rs. 10,000 for those who died due to COVID-19. After the families give permission, undertakers performed the final rites in the presence of a representative of the Sri Lankan mission and workers’ friends in the country.

One of the most pressing and long-standing issues the Sri Lankan migrant workers are facing is the lack of coordination and weak communication between them and Sri Lankan embassies when they need support. The situation is the same in the Gulf where around 1.5 million Sri Lankans are working and in many other countries.
During interviews with migrant workers, they told Daily Mirror that restrictions imposed by their host countries to slow the spread of COVID-19 have further curtailed their already limited ability to contact embassies to seek any support that they need.

“There is no point in talking to our embassies here. They want us only till the agencies send us here. After that, they don’t care about us. I tried to contact embassy officials for weeks for help because I did not know any Sri Lankans in my neighbourhood. But, I couldn’t reach out to them,” a migrant worker stranded in Qatar complained.

As per the National Labour Migration Policy developed in 2008, the Sri Lankan Diplomatic Missions in host countries shall recognise as their priority, the duty to protect the rights of migrant workers and to extend immediate assistance, including the repatriation of distressed or beleaguered Sri Lankan migrant workers. It also states that repatriation is the responsibility of the State and the State shall ensure safe repatriation for all workers in need.

“This will address emergencies faced by migrant workers, due to sudden and serious health issues, and grave safety and security issues. Diplomatic Missions shall make sure return and reintegration take place with full protection of rights and freedoms,” the policy states.

Unfortunate plight of ‘the lifeblood of the country’

Migrant workers not only in the Gulf but also many parts of the world are excluded from emergency protections during the pandemic. The Sri Lankan government depends on up to $7 billion in annual remittances from these workers, who have been praised as the “lifeblood of the country.” However, they are often ignored. The recent example is the statement of the current Minister of Agriculture Mahindananda Aluthgamage who referred to the infected workers as “bombs.”

As the coronavirus outbreak has spread rapidly around the globe, the Sri Lankan government is still struggling to combat it. Especially with the new Minuwangoda cluster which is increasing at an unprecedented rate, the country has again suspended flights bringing stranded Sri Lankans home.

Meanwhile, the Sri Lankan embassies abroad are still unable to provide an exact number of Sri Lankan migrant workers, infected with the deadly virus. The plight of the stranded migrant workers exposes severe results of the decades-long systemic problems of Sri Lanka’s national foreign employment agency and the hands-off approach of the government in matters related to migrant workers.