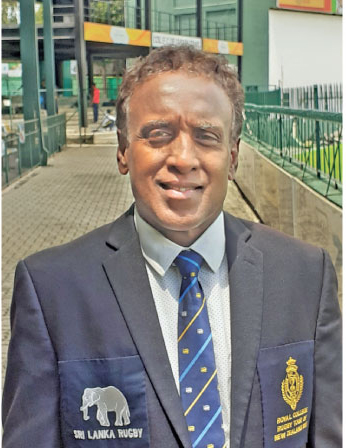 It is very rare to see a person participate in so many sports while excelling in studies to reach the top level. Rohantha Peiris is one of them who had a sound academic background while engaging in all sports at school and even now to keep him fitter and healthier

One of the great products from Royal College, Colombo he is well known as ‘Rohi’ in sporting circles. He hails from a sports loving family as his father Dante Vier Peiris was a former Royalist and die hard supporter of Rugby while receiving college colours for athletics. He has two brothers Nilhan Peiris the elder brother was another rugger player who played for CH and FC and Havelocks while younger brother Premraj Peiris played for College and Havelocks

Rohantha continued his school career at Royal from junior school to college . As he was very enthusiastic in sports, participated in Athletics, Basketball, Cricket, Soccer respectively. He initially was very aggressive in playing Cricket and went on to play in under-12, 14 and 16 age categories. While playing cricket he started handling the oval shaped ball at age of under-15 captaining the under-17 team where Summa Navaratnam was his coach.

In 1975, when he was only 16 years he was called to play in the First XV rugger side under Ifthikar Hassan and his second year was led by Manik Weerakumar in 1976 coached by Summa Navaratnam. They had one of the memorable years in ‘Bradby Shield in 1976 where they crushed Trinity in both legs by 36-0 and 25-6 respectively, where he scored three tries in two legs. Royal had the best third row in the schools rugby arena comprising Ajith Gunawardena, Asoka Siriwardena and Saman Jayasinghe, which remained undefeated that season with only Thomians holding them to a 6-all draw.

Rohantha who started his rugby career in 1975 and went on till 1978 where he captained the side. When he took over the captaincy in 1978, he had a herculean task on his shoulders. He had a young team with only four senior coloursmen in their ranks namely Dil Peiris, Raba Gunesekera, Iqbal Hassan along with him. Rahim Junaideen, Raheel Hashim, Late Raba Gunesekera, Gihan Nanayakkara, Vipula Dharmamdasa, Senerath Liyanage, Sujantha Kumar, Lanil Waniganayake, Rizvi Saldin, Asantha de Mel, Susantha Ratnayake, Wimal Eparachchi, Charith Gunwardena, Rustom Jilla were the other players who donned the college jersey.

He emphasized on their success which was due to five personalities Dr. Fred Perera, late Dr. Lucky Dissanayake, Dr.Maiya Gunasekera, Summa Navartanam and Malik Samarawickrema who played a pivotal role in looking after boys in all aspects including their injuries. These gentlemen were there all along with the team in and out on their way to success. .

When he was in his peak in 1976, he got an invitation to play for Havelock’s Club, where he was li﻿v﻿ing within the vicinity of the club area. He made his debut same year under the leadership of Thajone Savangan, where they won the Triple Crown with the inclusion of some great players like Hafi Abdeen, Hazil Samad, Jeyer Rodriguez, Royden Silva, David Nicolle Marco de Silva, Lal Silva, Gavin Stevens, Shafi Jainudeen.

One year later he was in the Philip Buultjens sevens winning side. He went on to play against the visiting Dulwich College which Royal, won 7-4 Loughbourough Grammer school by representing the Sri Lanka Schools winning both as Captain. Shane Pinder, Anurudda Bowala, late Raba Gunesekera, Christoper Thambipillai, Iqbal Hassan, Kemal Deen were some of his teammates.

In 1978 Royal had a fine season beating St. Peter’s (12-3). Isipathana (17-6) and Trinity (8-4) in Bradby Shield return after the first leg ended in a nil-all draw They were also runners up to Vajiravudh College, Thailand in the Asian Schools Rugby Tournament in Bangkok, Thailand

He continued to play his favourite position as Centre . In 1977 he was convinced to play for CR and FC and continued to don their jersey until 1985, where he captained them in his last year 1985, before calling it a day. He put up some scintillating performance for CR at the SLRFU Presidents Trophy, Clifford Cup and R.Premadasa Trophy 1984. Late Shiraz Fernando, Roy Balasuriya, Iqbal Musafer, John Rudra, Michael Muller, C.P.Abeygunawardena, Michael Matthysz were his captains whom he identified as his mentors. Ajith Abeyratne, Summa Navaratnam and Malik Samarawickrema his coaches who guided and moulded him as a quality player.

Meanwhile, from 1980 to 1985 the ‘Golden days in his rugby career’ he was selected for the Sri Lanka sevens team under Lanil Tennekoon, and continued to play for Sri Lanka for the next five years under C.P. Abeygunwardena, Saman Jayasinghe and Rohan Guneratne where he played two Rugby Asiads and equal number of seven tournaments. After quitting as a player he was elected as vice president of CR from 2004 to 2006 Then he served as a National selector from 1999 to 2003 and 2010 to 2014.

He got involved with Royal Rugby where he was the chairman from 2017 to 2018. During his tenure Royal were three times champs. They took the team to New Zealand in 2018 which fared extremely well by getting the guidance from the former All Blacks coaches, which enabled them to become consecutive league champs.

At present he is a group non-executive Director at David Peiris having started his career at Aitken Spence commencing in 1978 as a trainee and went on to serve as a Director and retired as Managing Director, where 11 companies were under his purview.

His wife Shalika Peiries financial controller by profession retired recently was a pillar of strength in ups and downs in his life. Ayanthi Peiries a former athlete at Vishaka is his daughter while son Asvin Peries played rugby at Royal and was a fine squash player who won colours at Royal.