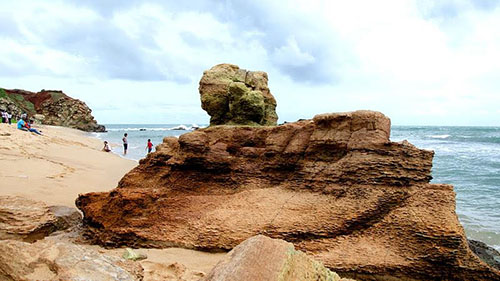 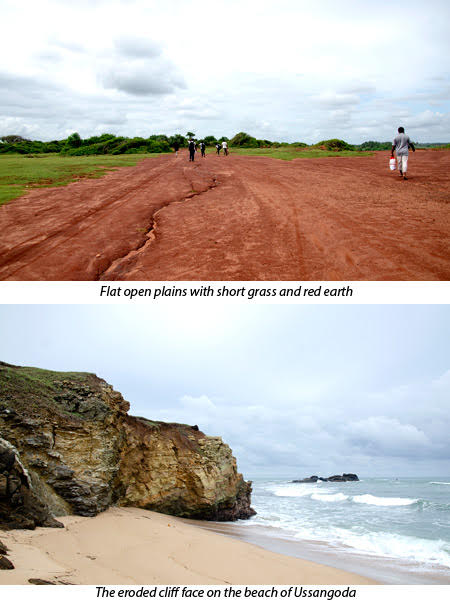 Beyond Tangalla, the coastal road heads inland depriving visitors of the scenic views freely available until then. However, this area has a dramatic and wild coastline characterised by sweeping bays, wide barrier beaches and sand dunes that are often missed by many visitors to the South.

After Godawaya, I visited another interesting Nature’s secret spot known as Ussangoda red-cliff which is striking not only for its golden beaches and blue sea – a common sight in the southern region of Ambalantota – it’s also known for the giants that surround and dot its shores. Tall limestone cliffs rise steeply from the sand, and fantastically shaped sea stacks modelled by erosion, stand close to the mainland. The incredible geologic formations on the red cliff headland include soaring sea cliffs, arches and many more sea stacks peppering the surf.

A narrow road leads towards the sea, taking you through villages and banana plantations before opening out into vistas of turquoise water and idyllic bays. Just before Nonagama, on the Matara – Hambantota road is a sign directing to Ussangoda. A small rutted road through banana plantations leads to the beach of Welipatanvila, an important fishing area where locals still practise traditional beach fishery.

As you approach the beach, another turn to the right through scrub and village homesteads leads to a flat open plateau with scattered patches of scrub forest and exposed red earth. This is Ussangoda, a place known for its mythology, archaeological importance and biodiversity. A tourist attraction once, it is now badly neglected.

A dirt track across the park covering an area of around 100 hectares of land heads through stunted scrub forest to another smaller open plain portraying a fantastic view of the sea, with sweeping bays to the left and the right. At the seaward edge of the plains is an eroded cliff that drops down to the sea.

The geological origin of Ussangoda is shrouded in mystery, but the general belief is that it is the remnant of an ancient meteor or an area in close proximity to a meteor hit. The rationale behind this thinking has been the unique red soil in the area.

The soil contains high levels of iron and other minerals that give it its unique reddish hue, thus preventing the growth of any vegetation. Pre-historic human remains were discovered here some time ago.

Ussangoda is also linked to several mythological characters of Sri Lanka’s history. Villagers claim this to be the landing place of the mythical King Ravana who is synonymous with Hindu mythology and according to folklore piloted his peacock chariot the ‘Dadumonara’ across the skies.

The unique habitat of Ussangoda is home to a variety of animals. Dry Zone birds and some reptiles are a common sight here.

The beaches sweeping east to Welipatanvila and west to Lunama are nesting grounds for five species of endangered marine turtles. The beaches from Welipatanvila to Godawaya are probably the most important nestling site for the leatherback sea turtle in Sri Lanka.

Birds are active at this time giving nature lovers an opportunity to spot many Dry Zone species. Situated by the sea with no natural wind-breaks, the area is windblown and only cactus-like plants such as Karamba, Pathok and Eraminiya plants from the adjoining Kalametiya Sanctuary seem to withstand the salinity and dry conditions that prevail here. Erosion is also badly affecting the boundaries of the park and the sea is gradually washing away the land.

Near the water’s edge, the strong waves have eroded parts of the cliff, creating interesting rock formations. Isolated rocks stand out like sentinels, casting shadows across the beach, standing tall to face the constant pounding of the incessant waves.

The best time of the day to visit Ussangoda is close to sunset when the setting sun illuminates the earth in brilliant hues of red and orange. When you travel to Hambantota in the Southern Province, Ussangoda is a must place to visit in your list of destinations.