Situated in Trincomalee, Kanniya hot water springs also known as Kanniya hot wells is a popular tourist site visited by a large number of tourists daily. According to visitors and locals, water of these hot wells is renowned for their therapeutic healing powers. Due to the mineral composition of the water, there is a belief that the water cures skin ailments as well as arthritis. Locals believe that these healing properties are due to the ever present gods in the surroundings of these wells.

According to archaeologists, the hot water springs had belonged to the Buddhist Monastery Complex of Velgam Vehera (Temple) Monastery also known as Vilgam Vihara (Temple) Monastery which spans over a large area. During archeological excavations, the foundation of the Buddha Statue, an old dagoba (stupa) and ruins of the Temple Complex had been found. According to scholars, the hot water springs had been used by Buddhist Monks of the Temple Complex. 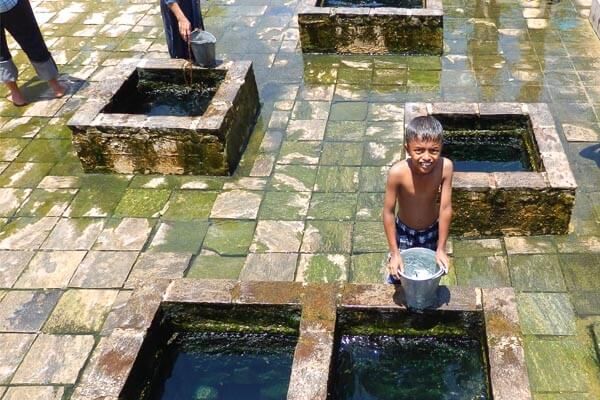 According to some information boards at the site, these hot springs date to *King Rawana’s (of *Ramayana epic) period and some locals are of the view that King Rawana had struck the ground with his sword in several spots and several fountains had emerged in those spots which were later constructed as hot wells. Tamil Hindus are also of the view that the hot water springs were created by *God Vishnu as King Rawana could carry out the last rites for his demised mother Kanniya.  There is a kovil (Hindu Temple) also in the premises of the hot water springs.

The hot water springs are visited by Sinhalese as well as Tamils as they want to soothe their bodies with the warmth of the water.

The seven springs vary in size.  Each spring is enclosed by a stone wall and covered by a tall wall to provide privacy to those who bathe.

During day time, the hot wells are crowded and it is advisable to visit them early morning or late evening. Although, there are buckets available near the bathing area, it is better to take your own bucket. Using soap at the hot wells and the vicinity is prohibited. There are separate changing rooms for males and females. The hot water springs in Kanniya is a mystery to date. At times, the temperature of the springs varies. According to some visitors and locals, a current of bubbles rise from the bottom of the wells similar to a boiling pot of water.

Although, the hot water springs are a mythical miracle, they are intricately linked with Sri Lanka’s history and archaeology.

Directions: From Trincomalee go along Anuradhapura – Trincomalee Road and go past Mahindapura to Kanniya to reach the hot water springs.