COURT JUDGE IN STATE OF CALIFORNIA IN U.S.A

By: Upali Obeyesekere – From Toronto, Canada 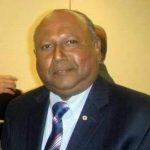 Aruna P. Rodrigo, of Riverside, has been appointed to serve as a Judge in the San Bernardino Superior Court. Rodrigo has been a Superior Court Commissioner since April 2020 and a Sole Practitioner since 2010. He was a Senior Attorney and Of Counsel at CKB Vienna LLP from 2015 to 2018 and served as a Volunteer Deputy District Attorney at the San Bernardino County District Attorney’s Office in 2015. Rodrigo was Managing Attorney at Macey & Aleman/Legal Helpers and an Associate at the Law Offices of Vincent B. Garcia & Associates from 2008-2010. Rodrigo earned both a Juris Doctorate degree from the University of La Verne College of Law and a Master of Public Administration degree from the University of La Verne. He fills the vacancy created by the retirement of Judge Raymond L Haight. Presiding Judge Michael A. Sachs said of the appointment and selection, “we are pleased with the Governor’s appointment of Judge Rodrigo who will be a great addition to our diverse bench.”

He had his primary education at Thurstan College

, Colombo 7 and migrated to U.S.A at the age of nine years with his family. He obtained his degree in Criminal Justice from San Diego State University, California, and Juris Doctorate of law and Master’s degree in Public Administration from University of La Verne, U.S.A.

He was admitted to practice law in State of California in 2008 and is a certified Family Law Specialist by the State Bar of California. He was also an adjunct law professor. Until his appointment by the Governor, he held various senior trial attorney positions including working at the County District Attorney’s Office. In early 2020, he was appointed as a Court Commissioner in San Bernardino Superior Court.

His wife, Hon. Candice Garcia-Rodrigo, is also a Superior Court Judge in California.

He currently resides in Southern California with his wife and four minor children. His parents, Upali and Malani Rodrigo are retired Los Angeles County employees.

His two brothers are Thurstanites too. Elder brother, Damith S. Rodrigo (93 Group) is a senior Law Enforcement Officer in California and Younger brother, Dr. Yasas B. Rodrigo (MD) is a Primary Care Doctor in Washington DC.