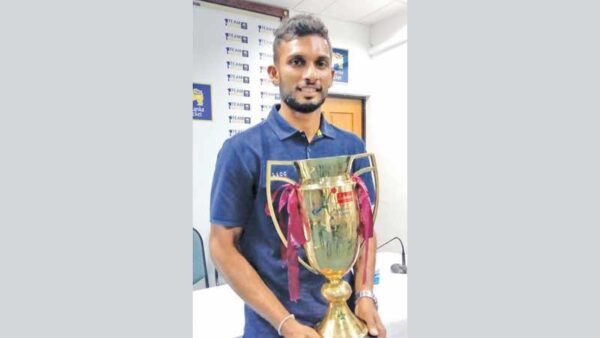 Dasun Shanaka returned home with a bounty from Pakistan and now called up again to mend a broken team
Source:Sundayobserver

Beleaguered cricket chiefs have come to look for a typical country boy in Dasun Shanaka to carry a troubled nation on his shoulders at a time Sri Lanka not only hit rock bottom in international rankings but was ripped apart by shady elements in the team who were a law unto themselves with discipline and dignity flung out.

Growing up in the bustling countryside of Negombo where he cut his teeth as a cricketer playing for missionary schools St. Peter’s College and later Maris Stella College, Shanaka initially shot to the limelight when he smashed a record 16 sixes playing for his Sinhalese Sports Club (SSC) in a T20 domestic match that was just one short of the highest number of sixes struck by Chris Gayle at an Indian Premier League match.

But more than six-hitting, the down-to-earth Shanaka will first have to tame the beast and give it leadership at a time the experts and even former Sri Lanka players are skeptical that anything will ever change in a set-up they contend has gone out of hand.

“There are a lot of plus points having Dasun as the new captain,” declared Sri Lanka Cricket secretary Mohan de Silva. “Dasun is a guy who can muster the resources of his team-mates with his calm nature and leadership and give (outgoing captain) Kusal Perera the space and freedom to focus on his batting.”

Shanaka showed the true son of the soil in him when he led a poorly organised, makeshift and depleted Sri Lanka team to steamroll over the world’s number one rated T20 team Pakistan in 2018 when the rest of the pampered big names chickened out over security fears and brought home a coveted trophy.

He had no foreign experts around other than two home grown coaches in Jerome Jayaratne and Rumesh Ratnayake for guidance.

De Silva said they deliberated for many hours before everyone at SLC, its technical advisory committee headed by former captain Aravinda de Silva and team selectors came to a conclusion that much has to be salvaged and pinning hopes on Shanaka became inevitable.

It will not be a cake walk for Shanaka but what matters most in his re-appointment is that first he was the captain when the country wanted a front man and now he is being trust into the same role at a time not only the team but the whole nation was looking for a role model with a head above his shoulders since Dimuth Karunaratne was sidelined.