Originally, the Colombo Flying Club was established by local Ceylonese as an alternative to the exclusive ‘Aero Club of Ceylon’ whose membership consisted of Colonial British gentry such as Tea,

Rubber and Coconut planters and foreign company executives. Sir John Kotalawala was a keen member of the rival Colombo Flying Club which was active till the beginning of WW II and a bit. After independence of Ceylon, both clubs were defunct and the Ceylon Air Academy took over operation of light aircraft. The Colombo Flying Club was revived in the eighties for a short time and then became inactive again. Another attempt is now being made to revive it again.

To commemorate the event, which was attended by Tourism Minister Prasanna Ranatunge, Capt Themiya Abeywickrema, Director General of

Civil the Aviation Authority, Maj General G A Chandrasiri, Chairman, Airport and Aviation Authority and Air Commodore Dhammika Dias the Base Commander, SLAF, Ratmalana, a model Aircraft Exhibition was organised by the founder members to introduce the art and science of Model Aircraft Flying to the next generation.

A unique Aero Modelling family of Edward Perera, known as the Negombo Aero Modellers, spanning three generations was in attendance with their homebuilt models. Many other home grown Aero Modelling enthusiasts participated in the event.

Support was also given by ‘Hobby Tech’ Lanka the leading agents for model aircraft and ‘off road’ models and Radio Control equipment in Sri Lanka.

In spite of the potentially adverse weather the event was a success, in keeping with the mission and the ision of the Club.  Namely “To enjoy the art and science of flying and to soar with the eagles and to provide everyone an affordable way to fly.” 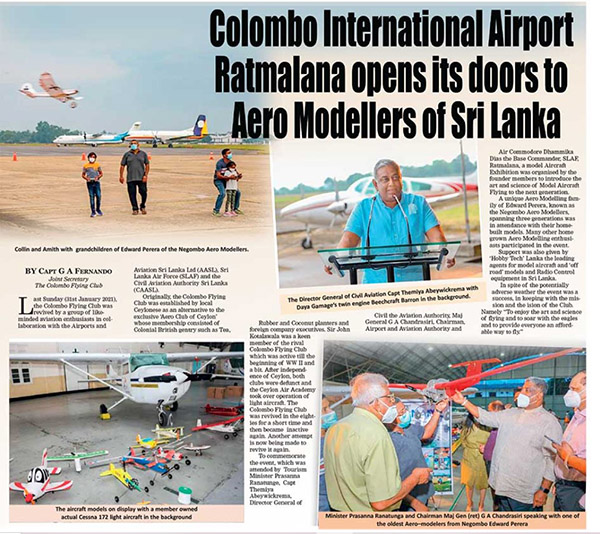