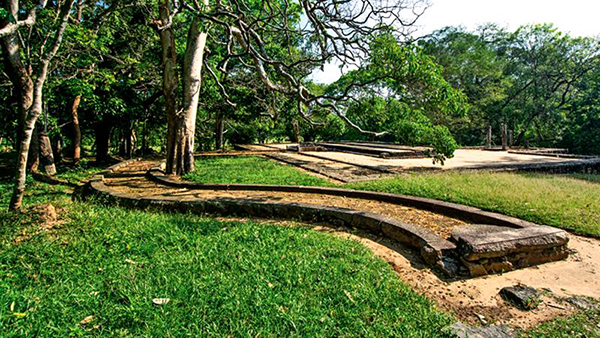 A ruined meditating structure of Arankele

Kurunegala or Hasthihaliyapura was a royal capital for over half a century. It boasts of numerous historical sites venerated by generations of Buddhists and other communities, built by kings in the bygone era. These magnificent monuments are testimony to a proud ancient grandeur, bearing a historical, artistic and cultural identity. 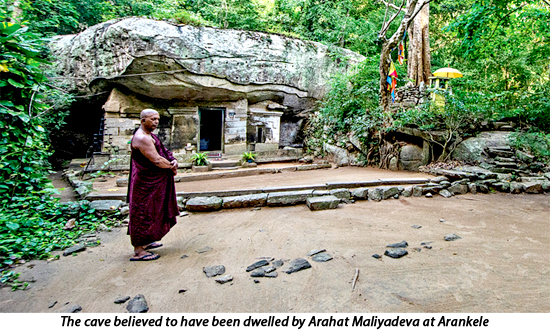 The archaeological site set up in the recent past and the ruins of the site belong to the early Anuradhapura period. Strewn in different areas of the precincts are remnants of large stone tablets on stone pillars.

There are a few natural rock caves lying on the slope of the mountain once dwelled by monastic bhikkhus for meditation. Some interesting features are the interior walls carefully plastered with clay, the stone doorways at certain entrances, and stone walls cut to divert rainwater getting inside. 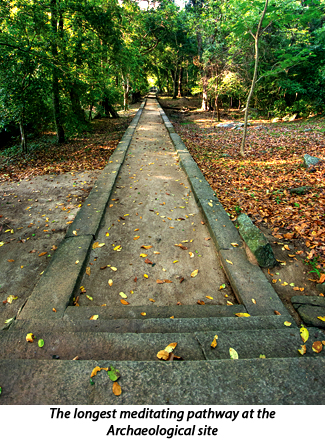 Walking under the green canopy of wooded trees is balm to stressed nerves. The huge trees give the feeling of being in the thick of the forest, while the whisper of leaves rustling in the breeze adds to the bird song. During our stay at Arankele, we experienced the salubrious and serene atmosphere which was truly breathtaking.

The bhikkhus meditating in the hermitage are in the dense forest which we did not tread for fear of disturbing them. The surrounding forest affords them complete privacy from the noisy world. With the wide variety of trees, shrubs, insects and other creatures of nature, it was a respite for us too, away from our tight routine in Colombo.

Arankele was supposedly the retreat of hermits and arahats, who, although having attained the piety and holiness requisite for Buddhahood, refrained from entering Nirvana to help others walk in the path of virtue. One such was the saga Maliyadeva, who made Arankele his abode nearly 2,000 years ago.

In another area is a large stone step-covered ancient pond, now partly filled with earth and water lilies, although it would have been quite deep at the time of the ancient sages who meditated here.

Arankele has been declared a protected area by the Department of Archaeology with the primary objective of preserving its pristine forest and intricate workmanship of the ruins. Dr. Senarath Paranavithana, renowned archaeologist and Director General of the Archaeology Department said that hermitages such as Arankele are rare worldwide, especially, those that reflect the skilled work of ancient Buddhist civilisation.

The best time to be at Arankele is dawn, before the heat of the day sets in. The stirring sounds of nature awakening to a new day and the crisp coolness are quite invigorating and help to spend a quiet, relaxing day.