In Ceylon, and around the World, it was known as the Senior Force. Although, general knowledge gives us our “Armed Forces” as Army, Navy, Air Force, then Police, the fact remains that the NAVY has the title “Senior Force”, & it was from this Force, that the only Military Officer to perish in Easter Sunday carnage, came.

I take pride in introducing this story, albeit a sad one, because I too spent many moments of prayer at the Church of St.Anthony, in Kochchikade, the Church that was practically beside H.M.Cy.S. “Gemunu 2”, a land-base, where I was drafted to, during my Service in the Royal Ceylon Navy.

I remember having to pass St.Anthony’s Church, both on my way to the Navy Barracks, and again, on my way home, whenever I was “on liberty”, as it was termed, at the time.

This particular Church was ALWAYS crowded with people, not necessarily Catholics, but also Buddhists, Hindu folk, and anyone who really believed that this Saint could work miracles for anybody in trouble.

We, at eLanka send our deepest sympathy to the family of the Officer in question. With respect, I salute you, Sir. 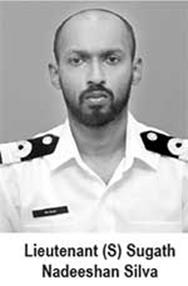 What a sad, sad story! Absolutely tragic. May his soul RIP.

It’s customary from time immemorial for Naval Officers whether they are Catholics or not to light a candle in this church when they get their new sea going appointment because, as you are very well aware, St Anthony is the Saint who look after seafarers like us.

Not only the above, but whenever a Naval Ship leaves from Colombo Harbour, the CO turns the ship towards S. Anthony’s Church and then turns the ship back to the Harbour entrance. As it says, St Anthony is the Saint who looks after seafarers. Cibba

It was Easter Sunday, April 21, 2019. SLCG Ship Suraksha, 100 meter long Offshore Patrol Vessel (OPV) was getting ready for 14 – day Patrol. Her fuel tanks were topped up, all victuals (required for 10 officers and 100 men crew for 14 days) loaded. Both cold and cool rooms were full with fresh fish/ meat and vegetables. Ship was ready to sail at 12 noon on 21st April 2019. Logistic officer onboard has a lot of planning and work prior to long Patrol or voyage.

Young Lieutenant on board, who took over his new appointment as Assistant Logistics Officer (ASO) few days back was working hard. New appointment, new ship, new friends and new crew for him, he wanted to impress them with his work. A call came from home around 7AM in the morning from his mother to say they are on their way to village Church in Kochchikade, Negombo. He was the second son of a devoted Catholic family.

He thought of only one thing: I am going to miss Easter Sunday Mass

Young Lieutenant quickly changed in to his best civil clothes and went to church. He was thinking of lighting a candle, praying and returning to the ship by same vehicle. Time was 0830 hours. He heard announcement that Tamil Mass starts at 0840 hours. Church was full of devotees. Families with their children dressed in their  best Sunday. Happy and chatting / greeting each other. Our young Lieutenant can understand and speak Tamil very well. So, he changed his mind. CO said, “come back by 11”. There is enough time to attend the Tamil Mass and return to ship. . He dispatched his young driver telling him “I will attend the Mass and come back to ship. I can get a three wheeler. It’s not that far from here to the Naval Base”.

The Tamil Mass started at 0840 sharp. The suicide bomber walked into the Church at 0845 and detonated himself.

With the deafening sound, Naval Base was activated. News starts coming in ‘blast at St Anthony Church Kochikade’. CO of the SLCG Ship Suraksha knew his subordinate was in the church. He rang his mobile while rushing to the scene. Mobile was ringing, but no answer. The ship’s crew looked for their officer whilst transferring casualties. CO rang the mobile of his subordinate officer again. This time someone answered !. A female voice! She introduced herself as a nurse in the Accident Ward of General Hospital Colombo. She said in a faint voice, “Sir, he is dead”

“CO sat on the road curb with tears in his eyes. He is a battle-hardened Naval Special Forces man. He has seen enough deaths and destruction in his life, but this loss hit him hard. He said “My son! Why did I allow you to go to Church?”  Young Lieutenant is the only Military Officer to succumb to injuries due to Easter Sunday terrorist attack.

This is a true story.

Lieutenant (S) Sugath Nadeeshan Silva was born in Kochchikade, Negombo on 23rd November 1991, as the second son of his family. He had one elder and one younger brother. He had his early education at Thoppuwa St Philip Nari Sinhala Mixed School, Kochchikade and Mari Stella College, Negambo and proved to be one of the brilliant students, who excelled in studies.

He joined the Sir John Kotelawala Defence University (KDU) as an Officer Cadet on 17th September 2012.

Sugath excelled in Cricket. He earned his bachelor’s degree in Logistics Management in 2016 from KDU and successfully completed Sub Lieutenant Logistics course at Naval and Maritime Academy, Trincomalee and joined SLCG Ship Suraksha as his first sea appointment when this untimely demise occurred due to a terrorist attack. He was posthumously promoted to Lieutenant Commander and buried with full military honours. May he Rest In Peace.