but a shirt made of gold,

is too much to behold,

though sometimes it pours,

This story is true,

it’s come out of the blue,

and he loved to be known as gold-man,

but it got him in strife, & he lost his life,

and I would not want that now,

THIS IS THE NAME OF THE GAME,    IF YOU DO NOT TAKE NOTE,

OF THIS LITTLE QUOTE,

THEN, I SURELY WILL NOT, 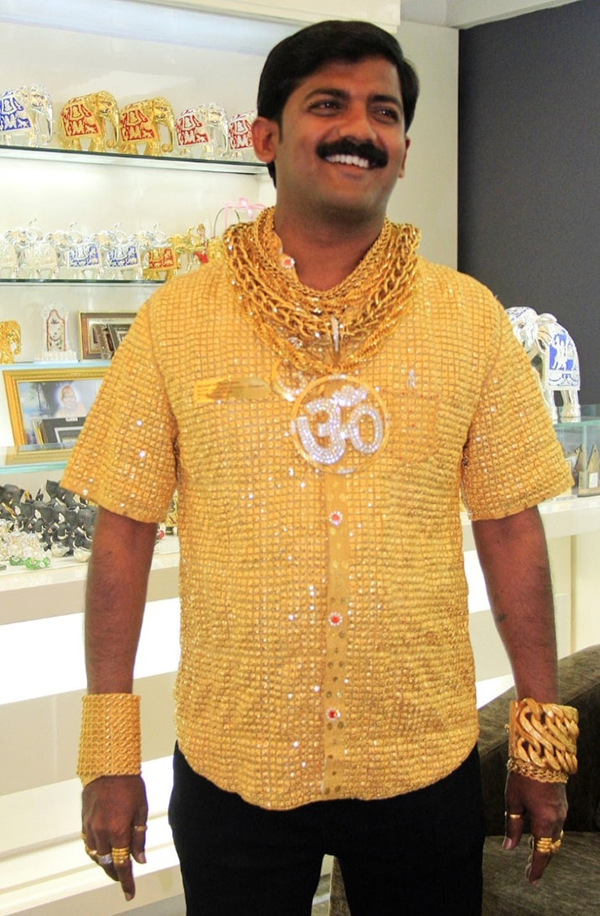 An Indian businessman who made headlines in 2013 for purchasing a shirt made entirely of gold has been beaten to death in western India, according to a report on Friday.

Datta Phuge gained fame when he ordered a customised gold shirt worth 12.7 million rupees, around $240,000 at the time.

Kashmir death toll reaches 23 in protests at killing of rebel leader. The hefty garment earned Phuge – a money lender from Pune in Maharashtra state – the moniker “gold man”, a title he cherished.

Police said Phuge, believed to be in his mid-40s, was attacked and killed by 12 assailants brandishing stones and sharp weapons on Thursday night after one of the suspects had invited him for a party, according to the Press Trust of India news agency.

“As per preliminary information, Phuge and his son were invited by one of the suspects, who know each other, to celebrate a birthday. However, we are investigating how Phuge reached the open ground where he was murdered.

Phuge’s 22-year-old son witnessed his father being murdered and had been spared by the alleged killers, he added, saying police suspected the motive could have been a dispute over a money transaction. Four suspects have been detained.

Phuge loved gold and the fame that came with his shirt.

“Everybody knows me as the ‘gold man’ in the whole region. Other rich people spend one crore (10 million rupees) to buy Audis or Mercedes, to buy what they like. What crime have I done? I just love gold,” he said in 2013.

“Gold has always been my passion since a young age. I’ve always worn gold as jewellery in the form of bracelets, rings, chains,” he added. India is the world’s biggest consumer of gold, with purchases an essential part of religious festivals and weddings.