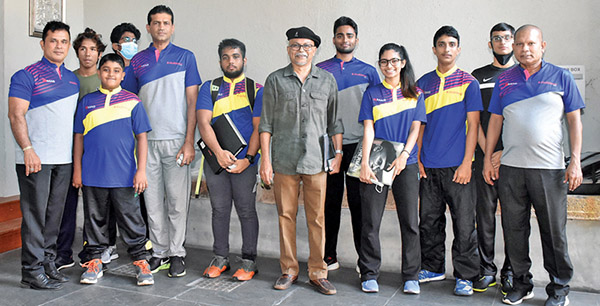 Boxing Association of Sri Lanka (BASL) President Dian Gomes extolled the virtues of amateur boxing for youngsters and the importance of developing technique after granting official recognition to the Hishaam Ousman Boxing Academy on 17th February.

“One of the reasons boxing is a great sport is because it teaches you discipline and to play fair. In life that’s important. It’s not about the winning part of it. Your ultimate goal will be to box at the Olympic Games which Sri Lanka did after 40 years when (Anuruddha) Ratnayake qualified and we won a bronze after 68 years at the Commonwealth Games. Our target is always SAG (South Asian Games), Commonwealth Games, Asian Games and eventually Olympics,” Gomes told academy students in an inspiring speech.

He stressed that priority should be given to education. “Priority should be to educate yourself first. To become a professional or to go to university. Boxing should be number two. That will help you with studies, discipline, to sacrifice certain things and stay away from trouble as well,” said the former Royal College boxing champion who has been instrumental in resurrecting boxing in the country during the past two decades.

“Starting this new boxing academy will also help to teach technique.. What Allaam (Ousman) is trying to teach with other coaches as well is technique which will give you a huge advantage to box technically. It is not about just hitting each other but to find the technique and the right way to fight. We are conscious about who is coaching because we have to be careful about blows,” he said.

“I want you all to be disciplined and to be part of the journey. You might be lucky to represent the country. More than that at least you can say one day when you get much older that ‘I have boxed at the school level, intermediate or nationals’,” said Gomes after donating 12 pairs of gloves to the academy named after the late Hishaam Ousman, one of the finest scientific boxers produced by legendary Royal College boxing coach Danton Obeyesekere.

Allaam Ousman, a former junior national champion is Technical Director while Dickson de Saram, a former Sri Lanka international in bodybuilding is the Fitness Coach at the academy situated in YMBA, Fort. The Director Marketing/Promotions is former Trinity College, Kandy boxer and rugby star Reza Odayar of Hellibees Racing, who have partnered with the boxing academy. Among the students of the academy is 10-year-old Deyan de Saram, younger brother of Dimash de Saram, who has won the L.V. Jayaweera, T.B. Jayah and Stubbs Shield meets representing Mahanama College. Another keen boxing student is Anishra Odayar, a former Sri Lanka shooting star and also a fine athlete.

to clubs in France and South Korea. “We have tied up with an English club for the youngsters. Even if you go to a university in England, we have a place for training in London itself.

Some of our international boxers have gone there for training as well to train with British boxers. We are building that network both in the junior, senior and at club level,” he said.

“We have already got a club in Paris for training so that we can take part in some of the Montana tournaments even through a club and through Sri Lanka. Then we are tied with the Korean Boxing Association who have sent all the gloves and everything for us for the national team and the national pool,” he said.