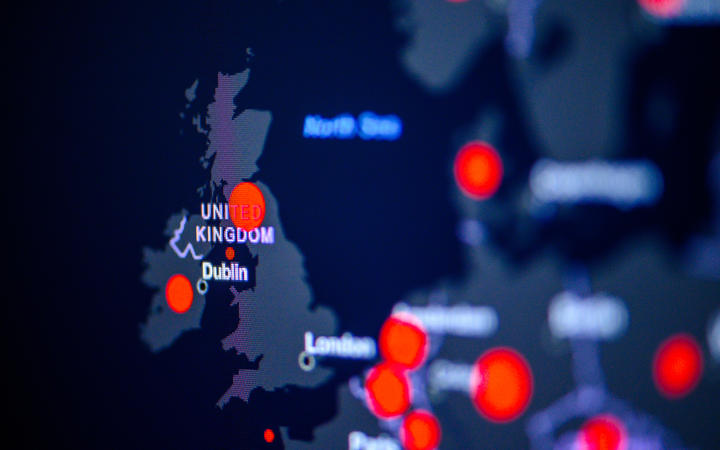 This week in the UK, new daily cases have dropped below 10,000 for the first time since October.

In the US, on Friday the average number of daily new cases fell below 100,000, also for the first time in months.

Economist and Covid-19 modeller Rodney Jones, who has been keeping an eye on the international trends, said the speed of the decline in US and UK cases was remarkable.

“In early January, all the curves looked firmly exponential,” he told Morning Report.

Looking ahead, Jones said modelling forecasts showed that fall in cases would continue.

“An end is in sight I think, because what would happen normally is you have a lockdown, you contain the virus, but then you open up again and we’ve get another wave. But those waves take three-four months to build, by then we’re going to have the vaccines being deployed into that potentially new wave.”

That would have flow-on effects for New Zealand, he said.

“The numbers we have of positive cases coming through our MIQ is itself a function of the strain of the virus and the countries where the returnees are coming from.

“I think it’ll bring it down to 10-15 [cases in MIQ] on a seven-day rolling average. We’re up at 60 in January when we saw the peaks in the US and UK. That can decline further as the peaks in the US, UK and Europe is following a decline. So we can have single-digit of positive cases a week [in MIQ].”

As a result, that would also further reduce the risk of an MIQ leak, he said.

“Remember, within a few weeks we’re going to have border workers, MIQ workers and their families getting vaccinated and that adds an extra layer of protection. For the first time since 12 months ago, there’s kind of an end in sight.”

Jones said a picture of where the pandemic was headed would become more clear over June and July.

“Vaccination is an essential part of the strategy. I think we can have more confidence that as we look to ’22 that we are going to leave this pandemic behind. It’s going to take time but I think by the northern summer we’re going to see much more mobility starting and that not creating a new wave and that’s going to be a big sign.”

‘We don’t want to live in fear’

Jones said the biggest risk for New Zealand was that it would stay “fearful and hunkered down” while cases drop around the world.

“We want to eliminate it … that’s still the goal … what I’m just saying is we don’t want to live in fear.

“As this thing starts to wind down and end, we have to shift our own mentality and the commentary and the way we respond to things, we have to start looking forward.”

He believed there was “too much alarm” after three new community cases were revealed on Sunday.

“We have a really good toolkit, we’ve shown we can chase down these leakages so you have to distinguish what’s a leakage, what’s an outbreak,” Jones said.

“The concern was that this was an outbreak and they moved on that basis since then it looks like a leakage,” he said.

“We don’t want to stay mentally hunkered down, we have to look forward and say there’s going to be these leakages – in fact we may only have a few more weeks of that risk of leakages – chase them down, and contain them.

“There’s no need for panic, there’s no need for heightened alarm. The paradox is there’s a lot of concern about the new variants and that the science of that is understandable, [but] the curve everywhere is bending, we’re seeing the best dramatic fall in cases.”