Doctors on the frontline of the latest outbreak are on high alert despite the government moving Auckland to level 2. 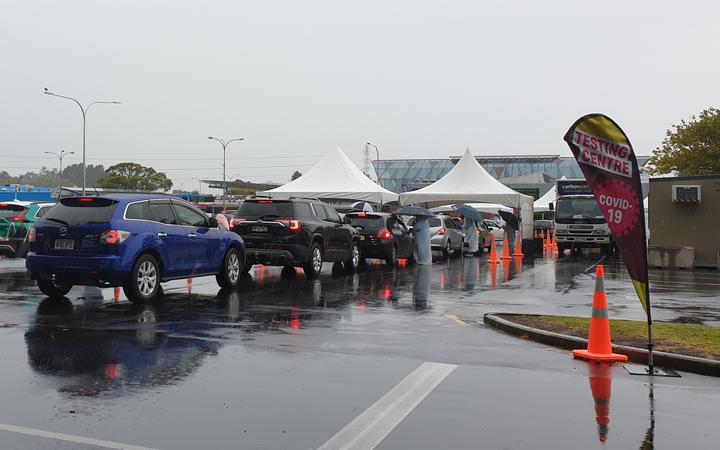 Lines at a testing centre in Ōtara on 15 February.
Photo: RNZ / Rowan Quinn

South Seas Healthcare has tested thousands of people through the Ōtara testing centre this week, most of them from Papatoetoe where the current six-person outbreak is centred.

Staff gathered around a TV in the reception to watch the government’s announcement and GP Maryann Heather said they were surprised at the decision.

“It could have gone either way but I guess … we were thinking we might extend at least till Sunday,” she said.

As many Aucklanders breathed a sigh of relief as they come out of level 3, Dr Heather and her colleagues were still in the middle of the latest outbreak.

Some of the positive cases came through their testing centre and the memories of the large August outbreak, centred in South Auckland were fresh.

She was wary about some of the new places of interest, including a nearby Subway store, and that there may be cases lying dormant.

It was more worrying because of the large Pacific population in the area which would be more vulnerable to Covid, she said.

“We kind of err on the side of caution but I guess we just have to go with what the government feels is the right call,” she said.

Auckland epidemiologist Rod Jackson was also surprised by the decision.

Though he had faith in Director-General of Health Dr Ashley Bloomfield and his team, he worried there were test results yet to come in from Papatoetoe and about the unknown source of the outbreak.

Most Aucklanders would have tolerated a couple of more days at the higher level – especially because it seemed a lot busier than previous level 3s, he said.

“All the tradies are still working, I think a lot of people are working,” he said.

“It’s hard on restaurants that rely on having people in, I get that, but I still think we should be cautious and, I do wonder – let’s hope they haven’t jumped the gun,” he said.

But epidemiologist Michael Baker said the decision was the right one and, unlike the August cluster, there was a plausible link to the border and no evidence of a widespread community outbreak.

The government had worried the current cases could be the tip of the iceberg, but that did not seem to be the case, he said

The decision-makers seem to have a handle on the extent of the oubreak, Reid said.

Covid-19 Minister Chris Hipkins said alert levels would rise again if new cases appeared with no clear link to the current ones.