The Victorian government will hold out until tomorrow to make a call on whether or not the state’s five-day lockdown will need to be extended, Premier Daniel Andrews says. 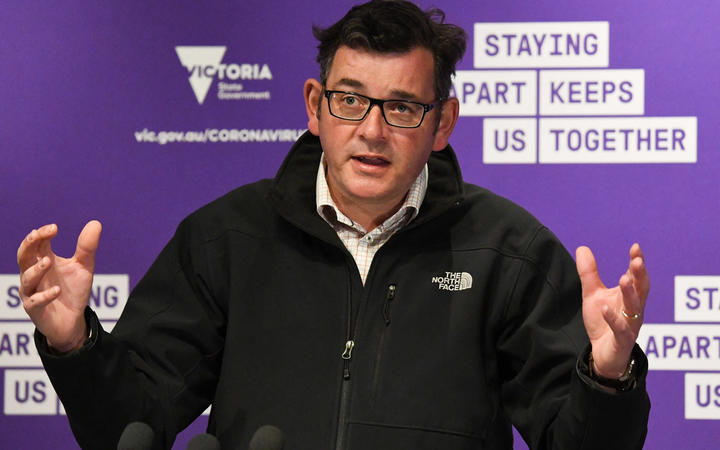 The state recorded two new locally acquired cases of Covid-19 and two further infections in hotel quarantine as it entered the fourth day of the lockdown.

The two local cases were close household contacts of a previously confirmed case linked to the Holiday Inn Melbourne Airport outbreak, bringing the total number to 19.

They were detected from 23,950 test results processed on Monday.

All active cases of the virus detected in the community so far have been linked back to the outbreak, which began with a family of three returned travellers staying at the airport hotel.

The two new cases were already in quarantine after attending a family function at a Coburg venue on 6 February.

Fears the UK strain of the virus was spreading more quickly than other variants prompted the statewide lockdown, which was announced on Friday and is scheduled to run until 11:59pm on Wednesday.

“We are well placed to be able to make changes tomorrow night. As I said yesterday, I’m not in a position to definitively commit to that, because these next 24 hours will, of course, be crucial,” he said.

Under the directions of Chief Health Officer Brett Sutton, the lockdown could extend until 26 February – the day the current state of emergency directions come to an end.

Authorities have reiterated that directions are frequently revoked prior to their expiry date.

Sutton has previously said it would not be unusual for some restrictions to remain in force, even if other lockdown settings were lifted.

Andrews said a decision would be made based on public health advice about “whether we can go back directly to the settings that were there on Thursday and Friday or whether we have to ease back into it”.

“These are promising results. We are well placed for tomorrow but we said it was five days for a reason. That amount of time is needed for us to have a confidence to hopefully make changes,” he said.

Andrews said international flights into Melbourne, which were stalled for the lockdown, would not resume on Thursday.

He said he would provide an update on the international intake of travellers “later in the week”.

The government has said it will provide an announcement in coming days about financial assistance for businesses hit by the lockdown.

The spread of the virus from the hotel into the community has focused renewed concern over the state’s quarantine system.

The ABC yesterday revealed the program was not following the same infection control standards drawn up by a PPE taskforce, which were being applied to the rest of the state’s health system.

The government confirmed it was looking at alternatives to the hotel quarantine model, including setting up purpose-built facilities on land outside of the CBD.

High-risk exposure sites being ‘mopped up’

Testing Commander Jeroen Weimar said the majority of the around 40 public and private exposure sites linked to the outbreak were “really starting to be mopped up”.

He said as of late Monday morning, there were 589 household and primary social close contacts across the Holiday Inn cases.

There were 499 hotel quarantine staff and residents, all of whom are in quarantine, and 1189 primary close contacts linked to exposure sites across Melbourne.

The Department of Health yesterday added two more high-risk locations in Broadmeadows to the growing list of exposure sites on its website.

The west side of the shopping centre between 12.15pm and 1.15pm has been designated a Tier 3 exposure site, meaning anyone who visited during that time should monitor for symptoms.

Three psychiatric wards across three Melbourne hospitals were locked down and staff were sent to quarantine after a worker was confirmed as a “weak positive” case.

Weimar said there were “very encouraging” negative results coming from testing of close contacts linked to the mental health units.

The worker’s three-year-old daughter has also contracted the virus, and more than 100 people linked to two daycare centres were being quarantined on Monday.

The were among the 38 people who attended the Coburg function on 6 February. A Holiday Inn worker who had returned a false negative test before later testing positive was also present.