That clarion call and exhortation, is not part of a song; rather, it is an anthem. The lyric is sober even as it bespeaks vitality and not a little relish in the prospect. The anthem, then, serves as a rallying call, for indeed the very essence of such is included in the words, composed so long ago, and which declaim, “Rally round the College Flag”!

The opening stanza is as well-known as the lines of the palms of our Thomian collective, and its membership encompasses the many, not few, and also directly addresses those that have long passed the portals of academia and moved on in life and often in different geographic directions much farther than the campus we have known for some years in the burgeoning persona of our youth.

Somehow, that rallying call has stayed alive, and the magic of it (if indeed it must be explained how) continues to spark the imagination and drive the spirit, and our people want to hear or have sung for their Alma Mater in many and wondrous ways. The ‘echo’ has certainly rung, even as the memory is sustained of the bell that tolls the passing of the onerous forty minutes that was the duration of the class period and ensconced deep in the Thomians’ id!

For many Thomians near and far, it is that opening stanza that is the most familiar and often recited or sung from memory. But, the remaining stanzas are replete with many other gems of thought and purpose, and it would do us well to consider a few. Wittingly or unwittingly, Thomians have, by and large, stayed with the ethos portrayed therein and captured so presciently by the author of the verse, namely Edmund de Livera. One wonders what wonderful compulsions drove the redoubtable Mr. de Livera to such inspired craftsmanship of this anthem!

While there is a certain religiosity that is underscored and the suggestion is also plainly included of a sense of patriotic diligence, by the third stanza, Mr. de Livera has touched so deeply upon the nerve that has defined what is properly designated as “The Thomian Spirit”, or alternatively, the famous “Thomian Grit”. How many are the ‘boys’ who know those lines from memory, how many are the ‘men’ who recall them? But do we remember the samples of those individuals and teams who have excelled in their calling and whose names adorn the boards that repose in the spaces on the walls within the College Hall? Of course we do! Each of those names, almost without exception, has a story. If one were to spend the time and the effort to dig into the past, one will be rewarded with many surprising details of those boys and men who strove and achieved, sometimes against many odds.

As other wits have opined, there may be those that have grown between Reed and Marsh, but Thomians are recognized as having been honed of Wood and Stone, those sterner materials that have shaped the destinies of several. We must recognize the amazing compass of discipline and direction provided by the tenure of Canon R.S. de Saram, and there remain many on this planet at this time, who still pay obeisance to such as he, for the nobility of what was provided by the teachers under his leadership, through some of the most challenging times and vicissitudes visiting S.Thomas’. A vital ‘balance’ is wonderfully alluded to in stanzas number four and five. The echo of those words has been proved true many many times over these many many decades of Thomianness. 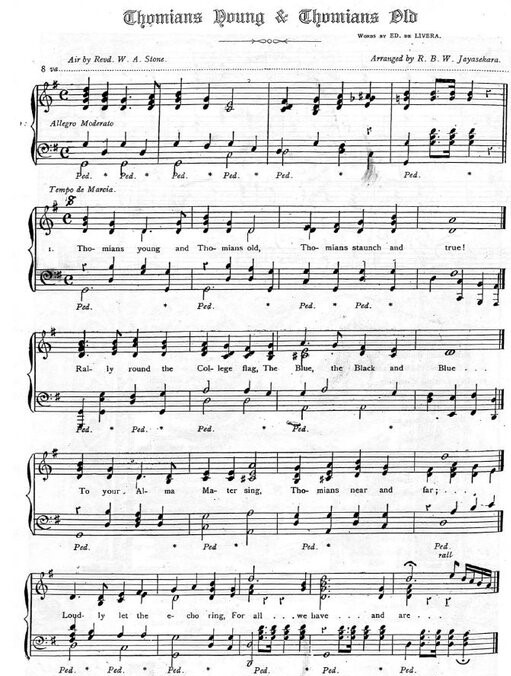