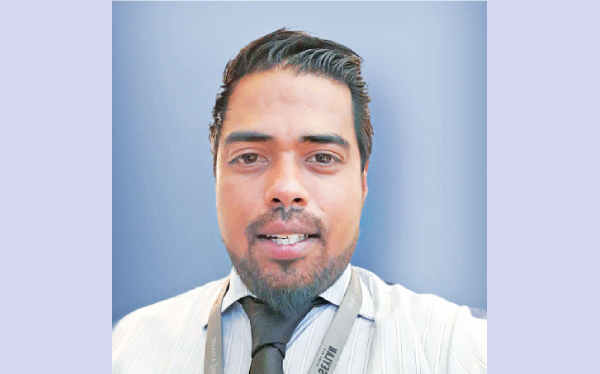 Kingswood College, Kandy is the pioneer institution which introduced Rugby in the country in 1891 and has been known as a rugby powerhouse. It has produced several top players who have brought honour and fame to Sri Lanka with their deeds on the rugby field. Amjad Buksh can be considered as one of the best players of Kingswood who played in the pivotal role of scrum half. He was the key link man between the forwards and the back division reaching great heights locally and internationally.

Allowdeen Buksh is his father who passed away in 2007 and mother is Doreen Buksh and he has three siblings. His father was an old boy of Zahira College, Gampola and played hockey. He joined the Sri Lanka Navy as a Chief Engineer later retired and joined the Royal Navy in Oman . His elder brother Ansar was a Kingswoodian who donned the college jersey in rugby and motivated Amjad to take up playing rugby. Ansar migrated to Wellington, New Zealand and settled down there. His elder sister Rikaza Alith is a pre-school teacher and owns a day care centre while the younger sister Rizana Liyanage owns a hotel in Kalpitiya . His mother Doreen was a former hockey player who schooled at Kandy Convent. Being a housewife, she was heavily involved with Kandy Malay Association for a long time and she served as the President from 2015 to 2019.

Amjad started to showcase his talent from the junior level captaining the Kingswood under-13 side in 1993 and 1994 , after he was enrolled as a kid to junior school. Amjad’s peerless all-round performances along with his fighting spirit steered Kingswoodians to a President’s Trophy title in 2000 beating Thomians 30-26 in the final under coach G.B. Gunadasa and in the same year Kingswood sevens captaincy reins were handed over to Amjad; his trademark of sniping runs and his kicking was vital to secure a second spot finish at Schools Sevens tournament. After finishing off the school’s rugby career on a high note, this exciting player was picked by Kandy Sports Club in 2002.

While he was playing rugby he was engaged in playing hockey for the under-18 team and scooped the highest number of goals for the Central Province team which enabled him to be selected to the National under-18 squad as a stand by player when he played for Kandy Youth Club. Apart from his brother Ansar Buksh better known as ‘Anchu’ his cousin brothers Nilufer, RInnie, Ronny Ibrahim had influenced him immensely to handle the oval shaped ball and hinted that one day he will play for the National team.

Amjad believes that it’s all about sheer hard work and sacrifice one has put in to achieve his goal where one could end obtaining the anticipated results.

Kandy SC held all the aces during that period claiming back to back titles and Amjad Buksh got into full swing as a scrum half showcasing few splendid performances in Kandy SC colours. In 2006, Amjad joined CR and FC and showed his talent as a sevens player clinching the ‘Most Outstanding Player’ award at Club Rugby Sevens tournament.

International Sevens Series, South African Sevens 2003, Hong Kong International Sevens and was also the scrum half for Sri Lanka in Asian Rugby Championships from 2004 to 2007 held in several countries. He has played under two National Captains namely Pradeep Bassnayake and Sajith Mallikarachchi which he says is an unblemished memory in his rugby career.

Apart from these he has few other distinctive memories in his illustrious career which began in 2003, at the Singer Sri Lankan International sevens becoming ‘Plate Champions’ for the first time in history and being adjudged the second runner up player of the tournament followed by Carlton sevens in the inaugural tournament held in 2011 at Bogambara Stadium. They emerged champions under his captaincy. In 2007, he was a member of the Lankan team which won the first World International match beating the USA side which was a great feeling at the World Series. He also shared his experience with Havelock Sports Club from 2011 to 2012.

He would like to show his sincere gratitude to some of the men who were instrumental in transforming him as a quality rugby player and a coach. This included his own brother Ansar Buksh, if not for his motivation and influence Amjad would never have achieved the present status. Ansar played for Kandy SC from 1997 to 2006 and represented the National side from 1997 to 2004. His coach in under-13 was Ananda Kasthuruarachchi, under-15 was Asela Muthumala, from under-17 to 19 was G. B. Gunadasa. According to him the late George Simpkin has been one of the best coaches he has ever met in his career.

After retiring, Amjad started his coaching career completing the level 1 and 2 coaching courses in Sri Lanka and has also successfully completed the World rugby level 1 and 2 sevens coaching course in Malaysia. Most importantly, he was fortunate enough to get international exposure as he was a part of the high performance course conducted by former All Blacks sevens coach Gordon Tietjens.

Currently, Amjad Buksh is heading the coaching department of Malay Sport Club and had a successful outing at the recently concluded Club Rugby League winning the championship of ‘C’ division. This year, Malay SC managed to clinch the title at the Development Sevens Tournament and got the much needed promotion to ‘B’ Division. Apart from the coaching stint at Malay SC, Amjad has joined TFB Academy and School of Rugby to share his expertise with the youngsters.

His wife Zinhara Burah is a housewife. At present he works as a Sub-officer at Seylan Bank Plc.