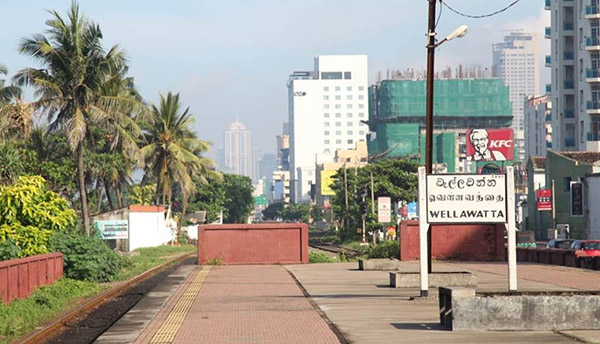 Jennifer de Silva is responsible for this magnificent story, sent to Max Gerreyn, who, in turn, sent it to me, for publication on the best website for all Sri Lankans, everywhere, eLANKA.

Thank you Jennifer, and Max, of course

for all these precious memories you wonderful people send us from time to time. I cannot even begin to thank you.

These are the type of articles that eLanka thrives on. After all, when everything is said and done, precious MEMORIES are the only worthwhile dowries that most of us are left with, as we head into the nearest “departure lounge” to take our final flight

On that happy note, I leave all of my readers to enjoy this superb article.

A TRIBUTE TO THE FAMILIES OF ARETHUSA LANE, MADANGAHAWATTE LANE AND THE CANAL END OF HAMPDEN LANE – sent in to the blog by Jennifer de Silva

What wonderful memories of those carefree days in Arethusa Lane – the boys playing cricket on the weekends and school holidays, the whistle of the Borakakul Karaya (man on stilts dressed as a woman) as he made his rounds, the Sakkili Band waking everyone up from their post-Christmas Lunch siesta. As I write this I can almost hear the end of shift siren from the Wellawatte Spinning & Weaving Mills (the redi molay nalawa) which you could set your watch by.

Who can forget the Paang Karaya from Royal Bakery with his load of bread, cakes, and Mas and Maalu Paang, vendors of fish, salt, coconut oil, vinegar, plantains, and anything that could be carried in a pingo (kadha karaya) or a basket on the head. Then there was the Thorombol Karaya with boxes full of all sorts of goodies from brassieres, to thread, nail polish, buttons, zips, lace, and ribbon – the list was endless, the Crab (Mud Crabs) Man who came from Negombo and the ice cream men from all the different companies (some good, some bad). On the weekends we would wait patiently for the woman who came around with Thalagulli, Halapa, Lavariya and Seenakku and other tiffin-time delicacies. We must not forget the lunch-boys on their bicycles who collected lunches from home and delivered it at school and work. “Rattu”, the tall and lanky Tamil with the red turban and white sarong was the most famous among them.

In those days, you only needed to go to the market to buy beef and other perishable items and then one would go to Swastikas, Colombo Stores or Sri Mahal. Kerosene and firewood were all delivered to your door. There was even a draper who came round pulling a large cart filled with fabric for dresses, sarees, etc. When one did go to the market, the return journey was usually by rickshaw. Alas rickshaws are a mode of transport no longer used. I wonder what happened to the sons and grandsons of those old Rickshaw Men?

In the very early 1950’s, the Canal was clean and I am told that boats used to come down from Piliyandala and beyond with vegetables and fruit to supply the Wellawatte and Dehiwela markets. Of course the canal became stagnant and almost disappeared after the shanty town came up. The men made a living by doing odd jobs, while the womenfolk worked as domestic aids in the houses of the area or made hoppers, stringhoppers and pittu for sale. I remember waking up in the morning to the sound of my mother’s voice telling off the hopper boy from the

Alakandiya, because he was late or the hoppers were not up to scratch. One resident of the alakandiya was Anula Karunatillake, a Sinhala film star. Anula became famous when a photo of her crossing the canal on her way home from school was published in a newspaper. Anula was a popular actress and continued to live with her family (her parents were vendors at the Wellawatte Market) at the “alakandiya” (canal) until her marriage to the cameraman who took that photo.

Arethusa Lane was an example of multiculturalism – Sinhalese, Burghers, Muslims, Tamils, Indians (Southern and Northern) all co-habiting peacefully. Even the 1958 riots didn’t affect this little cul-de-sac because we looked out for each other. We shared each other’s religious festivals and the associated food – the delicious Buriyani and Wattalappam at Ramazan, Kavum, Kokis and Kiribath at Sinhala New Year, Pongal Rice, Boondhi, Halva at Thai Pongal and Deepavali. Not forgetting the Christmas Cake, Cream Crackers and Kraft Cheese washed down with Ginger Beer/Milk Wine during Christmas.

Arethusa Lane was very narrow and one vehicle had to pull into a gate way to let the other pass. Now, it is even narrower, with houses built up to the edge of the road and surrounded by high walls with metal gates. Most of the houses are unrecognisable and I had to close my eyes to remember Arethusa Lane as it was in the 1950’s to the 1970’s and only then was I able to imagine the former residents many of whom have past away, moved elsewhere or migrated. It also brought to mind the birthday parties, New Year’s Eve get-togethers and last but not least the games of cricket played on Uncle’s badminton court even though girls were not included.

Now I have to reach down to the deepest recess of my mind to gather the names of the families. From the top of the Lane going down on the left – Wickremasinghe, Abeywardene, De La Harpe the De Kretser flats whose residents included Poulier, Forbes, De Kretser, Peiris, Van Langenberg, de la Zilva, Cooke, and Ching. Next house down was the Weeramantry house. Joyce Weeramantry married Osmund Jayaratne (later Professor of Physics). Meetings of the pre-coalition LSSP took place on the veranda of this house and many an LLSP election manifesto was drawn up at these meetings.

The big house at the top of Madangahawatte Lane belonged to Gate Mudaliyar Wickremasinghe. Of course, we must not forget Mr Nicolle who lived on the other side of Madangahawatte Lane and the various families that lived in his annexe – Smith, Candappa, and others. Next down was Flanderka, Wijetunge, Ferdinands/Chapman, Pereira, Abeysekera. Mr & Mrs Abeysekera were killed in a car accident around 1960. At No. 31 was the Jayamanne family and the Gallweys who lived in their annexe. No. 33 was where Professor EOE Pereira and his family lived. Lorenz (Lollo captained Royal in 1954) and Brian played cricket for Royal. The last house on the left was the old house on the big block where the Bartholomeusz family lived. This was a quaint house and I remember playing with Shirley Joan and her brothers in the large garden. In the 1960’s after the family had migrated to Australia, the house was pulled down and a block of flats came up on the site which later became the home of the Develo Radio Company.

In the days prior to house ownership restrictions, house numbers 23 to 33 were owned by Mr Jayamanne, who lived in a large house on Galle Road near the Dehiwela Bridge.

Going up the lane from the bottom was the house of the Perera’s where “Uncle” lovingly tended his badminton court. Next was Fernando and two houses up was Kanagaratnam. No. 40 was Proctor Douglas Silva and at No. 38 the Goonewardene family (a daughter of Gate Mudaliyar Wickremasinghe). At No. 36 in those early days of my memory, lived the Krishnamurthy family. They were South Indian Brahmins and I can still smell the Thosais, Vadais, Rasam and other vegetarian delights prepared by Mrs K and her two older daughters. Later on, the house was renovated by the Illesinghe family; Mrs Illesinghe (Geraldine) being the oldest of Gate Mudaliyar Wicksremasinghe’s daughters. The Razzaks lived at No 35. The next house, an original of the area, was where the Martinus brothers lived with their sister. In the house next to them lived Kenneth (their younger brother) and Peggy Martinus. Next up was the house in which the Ibrahim family lived. A school friend Thahani Marzook was part of this family as were the Muhseens who built the two town-houses next door. When the Ibrahims moved out, the Chithambara Nadar family moved in. The Muhseen town-houses were occupied by the Musheens (and later on Dr Samaranayake, the famous gynaecologist, and his family) and the Chuganis who owned Luxmi Silk Stores in the Fort. Vimoo and Nimoo Chugani attended St Pauls Milagiriya School at Bambalapitiya. Next up was the house owned by Gerry Karunatillake, next door was the house where the Grabbos lived and after they migrated the house was renovated and the Sinnathamby family moved in.

Across from the De Kretser flats lived the Brohier family at No 14 – a daughter, Lavender married Freddy White. Then the other Abeywardene family – son Harsha was the General Secretary of the UNP and was killed in a car bomb attack on High Street (WA Silva Mawatha) in the 1990s.

At the top end the residents included Cockburn, FXC Pereira, Barr-Kumarakulasinghe and at the very top where Hotel Sapphire now is, was the BER Cooray family. Mr Cooray later purchased the Cockburn house. There were also the large family of Josephs; Mr Joseph was the Church Appu at the Dutch Reformed Church at the top of Arethusa Lane.

My mother who was born and bred in Wellawatte, told us that in the mid 1900s, this was a forest of Madang trees which they used to walk through to play with their friends, the daughters of Mr Pereira (after whom Pereira Lane is now named) and the father of Professor EOE Pereira. Madangahawatte Lane’s residents included Balaji, Wagiswara, Pereira (Christopher was an Announcer at the SLBC), Abeykoon, Wickremasinghe, Martenstyn, Fernando (Cedric, Bryce and Christine), Patternott, Coomaraswamy and at the very end Edwards.

Received from S Skandakumar via email on July 3 2010

At Madanghawatte Lane were the NAMASIVAYAMS, who owned CEYLON PICTORIALS…the equivalent then of Nine Hearts, Uthum Pathum of now, and their elder son Rabindran was at Royal and went to the Campus with me. In fact I used to cycle to and from his home for night joint studies that helped me to clear the GSQ hurdle at the University of Colombo…! Rabi married an English girl and died in the UK a couple of years ago. His only sister, Lohini, married Dr Sanath Nallainathan of Castle Lane fame and they are settled in the US.