Victoria has reintroduced mandatory mask rules, reduced the cap on visitors in homes and paused an increase on the number of people allowed in offices after a hotel quarantine worker contracted Covid-19. 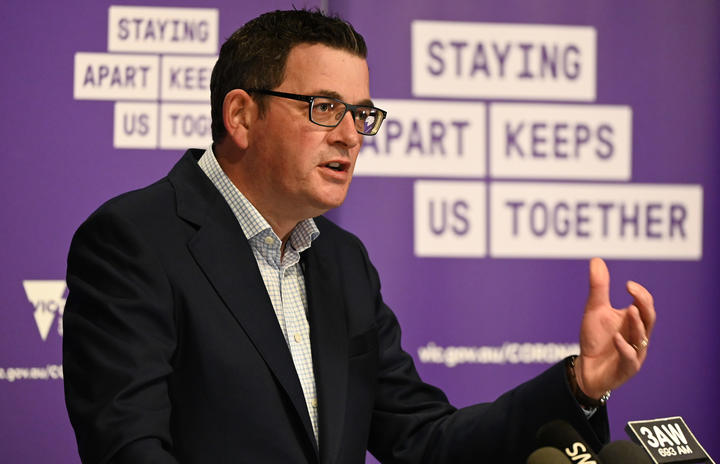 A plan to have up to 75 per cent of workers back in the office from Monday has been paused.

It follows the diagnosis of a 26-year-old, who had been serving as a resident support officer as part of the Australian Open quarantine programme.

The Noble Park man last worked at the Grand Hyatt on 29 January and returned a negative test after the end of that shift but later developed symptoms.

Premier Daniel Andrews said authorities were “assuming the worst” and acting as though the man had the highly infectious UK strain of the virus. Genomic sequencing to identify the strain will be completed in coming days.

Andrews said authorities were adding new restriction levels because “we have to assume that this person has in fact infected others”.

But Mr Andrews said “there’s no need for people to panic” after the positive case, adding Victoria now knew how to get on top of outbreaks.

Source of infection still being determined

Andrews said it was still not clear how the worker contracted the virus, given he had previously recorded negative test results while working at the quarantine hotel.

“All of that will become clearer with a combination of CCTV footage, genomic sequencing, further testing, all of that coronavirus detective work that is already well and truly under way.”

Andrews made the announcement in a late-night press conference, just hours after the infection was confirmed.

The case will be recorded as a community transmission, the day the state had celebrated reaching a milestone 28 days in a row without a locally acquired infection.

It followed news on Wednesday afternoon that health authorities were investigating the possible transmission of the virus between returned travellers at a different quarantine hotel.

Andrews said the 26-year-old worker had attended a social function in his capacity as a volunteer firefighter.

“We are confident people will get the information they need as quickly as possible.”

From Thursday all of the 13 major testing sites in the south-east of Melbourne were to open early and additional testing sites were being opened.

“We are continuing to talk to him [the worker] tonight to extract as much information as possible about his movements,” he said.

Weimar said contact tracers were working to get in touch with organisations and businesses listed as exposure sites.

He asked Victorians to bring water and have enough fuel in their car to wait for their testing at sites, adding that the weather is forecast to be warm.

The Grand Hyatt was one of three quarantine hotels used by the Australian Open to quarantine more than 1000 players and support staff ahead of the tournament.

Andrews said there would be an impact on some of the grand slam’s players and staff.

“There is a number of about 500, 600 people who are players and officials and others who are casual contacts,” Andrews said.

“They will be isolating until they get a negative test.”

Andrews said that may impact on play in lead-up tournaments taking place on Thursday, “but at this stage there is no impact to the tournament proper”.

But Andrews said the tennis was not the most important issue.

“I must say that is important to us but the issues are much broader and that is about public health and public safety,” he said.

Professor Sutton said he believed it would be safe for the first grand slam of the year to go ahead, as the latest people to test positive within the hotel quarantine system were diagnosed between January 15 and 22 and then moved to the health hotel.

He said it was a “precautionary but useful measure” to test the casual contacts who had stayed in the hotel.

‘We’ll absolutely get on top of it’

Professor Sutton and Mr Andrews praised the hotel quarantine worker for providing contact tracers with a detailed list of where he had been.

“We’ve identified it relatively early. We’ve got that exposure information coming in very rapidly,” he said.

“And I think people will absolutely step up to this in terms of knowing that they need to get tested and that they’ll need to isolate until they get that negative result. If everyone’s doing that, we’ll absolutely get on top of it.”

Professor Sutton said while the case meant an end to Victoria’s technical elimination of the virus, “we’ll do it again”.