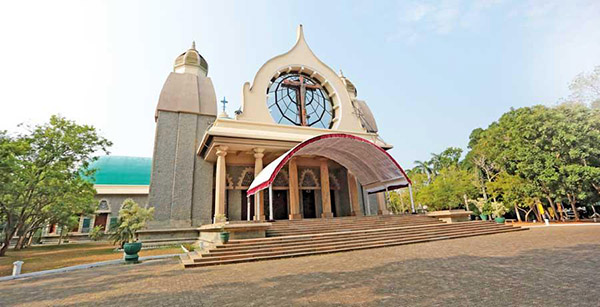 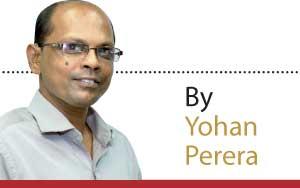 In the village of Narangodapaluwa in Ragama lived a young good looking girl Kurukula Arachchilage Donna Ann Nanayakkara, who married a Maduraperuma Arachchige Migel a Buddhist. This was a love marriage. Migel was a Buddhist but converted to Catholicism during their marriage in 1876. This was the first catholic family to be settled in the vicinity of the

Basilica at Thewatte according to Archbishop Emeritus Oswald Gomies who had penned the history of the Basilica in his book Thewatte Basilica Wansa Kathawa which was published in 2016.

Ann had later got a small prayer room constructed in her garden for her family. However, her husband Migel died a while later and Ann married his brother James in 1886.

“Inspired by the shrine of Lourdes which is largely associated with the healing of the sick. The Sick Day service at Thewatte is conducted near the grotto” A small Church in Ragama catered to the Catholics in a wide area during that time Narangodapaluwa. The neighbours in the area who got alarmed had burnt the prayer room. However, Ann who was not discouraged had constructed a small chapel afterwards.
There was no statue in it though Ann prayed in the chapel daily. She met the Parish priest of Nagoda who was catering to the Catholics Narangodapaluwa and proposed the construction of a bigger chapel. However, the parish priest thought that it is not appropriate to construct a chapel just for one or two families in an area. Ann did not give up her efforts. Accordingly, she met the then Archbishop of Colombo Anthony Coudert in 1911.
The Bishop permitted a larger chapel to be built in the area. A statue of Our Lady of Lourdes was gifted by the Ragama church. This statue remains in the Basilica. The first mass was held in the old Chapel in Thewatte on March 16 1916.

The small chapel soon became popular among the Catholics in the area. Accordingly, a 62-acre land was purchased from Brown and Company Ltd which was running a tea plantation in the area. A grotto was also constructed during the same year. More lands have been purchased from time to time from 1918 to 1964.
After the break out of World War 2, there was a threat from Hitler to invade India. The plan was to invade Sri Lanka initially and use the Trincomalee Port and Katunayake Airport to launch an attack on India. This was however failed after the German army was defeated near Alexandria. However, there was a threat from Japan though Germans failed in their efforts.
The then Archbishop Colombo Jean Marie Masson came to Thewatte and prayed to our lady asking her to save Sri Lanka from foreign invasion. Thus he vowed to build a Basilica if our lady saved Sri Lanka. This was on May 26 1940. Japan, however, gave up plans to invade Sri Lanka. Archbishop Masson informed the people about the vow he made to our lady to construct a Basilica at the site on February 2 1942. The war was over in 1945.

The Vatican accepted the devotion to Our lady of Lanka on February 15, 1947. Archbishop Masson passed away on July 28, 1947. He was succeeded by Cardinal Thomas Cooray who became the archbishop of Colombo.

The construction work of the Basilica began soon afterwards. Many including the school children contributed cash for the construction. The Basilica was consecrated on February 6, 1974. Several services have been conducted at the premises of the Basilica since its opening. Sick day service which began in 1941 is a popular service which has drawn large crowds since its beginning. This has been inspired by the shrine of Lourdes which is largely associated with the healing of the sick. The sick day service at Thewatte is conducted near the grotto.
The annual healing and prayer service this year was held on August 25 according to the administrator of the Basilica Fr. Victor Jayamanne. Triduum Prayer days began from August 21, 2019, and ended on August 24 and Vespers was held on August 24. The solemn healing and prayer service was held on August 25.
President of the Italian Episcopal Conference Italy Gualtiero Cardinal Bassetti, Cardinal Malcolm Ranjith, Archbishop Emeritus Nicholas Marcus, Archbishop Emeritus Oswald Gomies Auxiliary Bishops of Colombo Maxwell Silva and J D Anthony participated in the healing service.