Home  ⁄  Article  ⁄  Explainer: How a GameStop share pullback could hurt some investors
Feb 2, 2021 Posted by nzuser In Article Comments 0

Any pullback in GameStop Corp’s shares potentially exposes some investors to losses. Those at risk could include people who bought the stock at recent highs, or on margin, and those using options trading strategies. 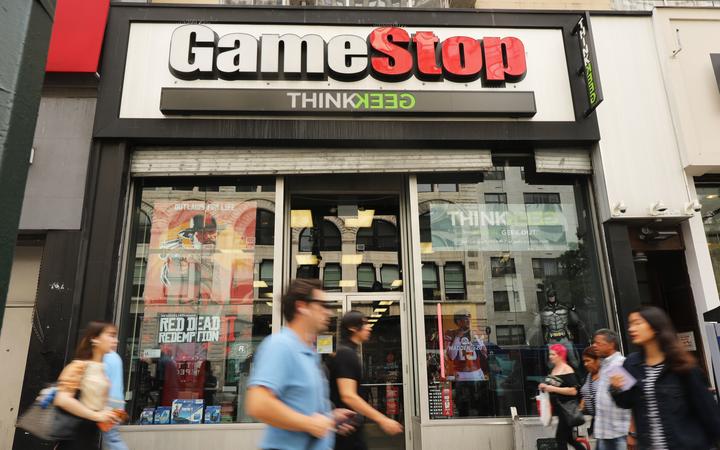 Overall, GameStop options are now pricing in daily moves of about 27 percent over the next month, versus around 8.5 percent at the start of January, according to Trade Alert.
Photo: AFP

Shares of GameStop, which had seen a spectacular rally, fell 31 percent on Monday to close at $225, 53 percent lower than their 28 January peak of $483.

Which investors could take a hit?

Analysts worry some new or inexperienced investors could face losses if they bought in as the stock was peaking.

Particularly vulnerable would be those who bought “on margin,” using money borrowed from brokers to buy extra shares.

The strategy can boost gains when share prices are on the way up, but magnify losses on the way down especially if brokers issue “margin calls” requiring clients to add money or face forced sales to bring an account’s equity back to required levels.

Brokers are not required to notify clients when they sell shares in a margin call, “although most do so as a courtesy,” according to the Financial Industry Regulatory Authority https://www.finra.org/investors/insights/margin-calls, the industry’s self-policing body.

Thousands of margin calls occur on a typical day and the rate increased last week, he said.

Peterffy said about 27,000 accounts had some sort of position in GameStock, and many positions liquidated were owned by traders who had shorted GameStock.

Representatives for brokerages TD Ameritrade and Robinhood declined to share details about how many clients may have traded GameStop shares on margin. A Schwab representative did not respond to questions.

However, Robinhood has restricted https://robinhood.com/us/en/support/articles/changes-due-to-recent-market-volatility buying shares, which limits investor exposure on its platform.

What does this mean for traders using options?

Options bets on GameStop shares helped fuel the stock’s breathtaking rally. Investors are gauging to what extent they could exacerbate a decline.

Some market watchers say a “gamma squeeze” – where market makers who have sold large numbers of calls to investors balance out their positions by buying the underlying stock – was a key driver of GameStop’s sharp rally.

In theory, a sharp drop in the stock could prompt those same market makers to unload their shares, potentially speeding up a plunge.

That’s what happened last September, after investors piled into call options on tech-related companies such as Amazon.com Inc and Alphabet Inc.

The unwind of those positions helped fuel a sharp decline in the Nasdaq .

For now, however, it appears that open interest in GameStop calls has not accumulated significantly, as many buyers of those contracts have traded them the same day, according to Susquehanna Financial Group derivatives strategy co-head Christopher Murphy.

More contracts have remained open among GameStop puts, according to data from Trade Alert.

Another key risk would be to market participants who sold those puts, wagering that GameStop shares would not fall below a certain level, if the stock were to tumble significantly below their targets.

But because options prices already account for gigantic swings in the stock, “people who are short options might not lose as much as you think,” Murphy said.

Overall, GameStop options are now pricing in daily moves of about 27 percent over the next month, versus around 8.5 percent at the start of January, according to Trade Alert.

On the other hand, investors who have held onto calls to position for further gains in GameStop shares could lose their entire investment should the stock not hit their targeted price before the options expire.

What does the trading mean for short-sellers?

Short sellers sell borrowed shares in a bet that prices will fall and the shares can be bought back at a lower level.

At the same time, a slide could draw new shorts looking to jump on any downward price momentum, Dusaniwsky said. The number of GameStop shares shorted has fallen by more than half in the past week, as shorts have covered their bets.

If new shorts join in as the stock slides, it would exacerbate the selling, as long holders try to exit their positions to realise profits, he said.