Western Australia’s contact tracing capabilities are being tested for the first time after a hotel quarantine security guard returned a positive Covid-19 result, sparking a five-day shutdown of the state’s most populous regions. 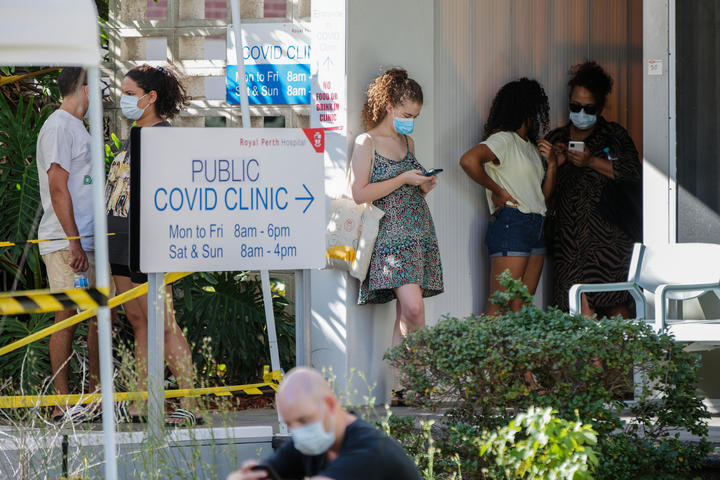 People wait in line to be tested for Covid-19 at Royal Perth Hospital on Sunday.
Photo: AFP

As of 6pm local time on Sunday, Perth, the Peel region and the South West region went into a five-day lockdown, with people in those areas required to stay at home.

While the announcement came as a shock to the public, the state’s contact tracing team had swung into action hours earlier, tracking down the security guard’s movements.

Results from genomic testing are not expected until later today or tomorrow, but authorities have flagged the man could have the UK strain of the virus as he was on a hotel floor where a positive case was under quarantine.

The UK strain is known to be far more contagious than the original.

Mass testing of people living in the same area has been underway, along with those from known exposure sites.

Queues formed yesterday around city clinics, with Royal Perth staying open until 10pm on Sunday to cope with the influx.

The man in his twenties worked at a quarantine hotel in the Perth CBD on Tuesday 26 January and Wednesday 27January , at which stage he is believed to have contracted the virus.

On Thursday, 28 January, he developed symptoms and called in sick to work before being tested.

WA previously required hotel quarantine workers to be tested once every seven days, but that was recently upgraded to once a day.

The patient had tested negative for the virus on 15 January, 17 January, and 23 January.

Because he returned negative test results prior to those shifts, contact tracers are focusing on a six-day period of his movements from January 25 to 30.

A list of places he had been to over that time was released on Sunday, and authorities have warned that list may grow over the coming days.

The security guard lives in a unit in the Maylands area in inner-city Perth with three other housemates.

They have all been contacted, tested and placed under 14-day quarantine at a state-run facility.

WA Health Minister Roger Cook yesterday said the three close contacts had tested negative for the virus, however, that was expected to change.

“I should note that, pleasingly, the gentleman’s housemates at this point in time have returned a negative result, so that’s a sign that we have really got on top of this very early on,” Cook said on Sunday.

“But it is a serious incident.

“He’s been out there in the community potentially infectious during some or all of that period.”

While at this stage authorities believe the three housemates are unlikely to have been infectious while out in the community, contact tracers will likely be working to determine their movements over recent days as well.

The hotel quarantine security guard worked a second job as a driver for a rideshare company.

WA Premier Mark McGowan on Sunday stressed he was not believed to have worked that job while infectious.

“The advice I have is that he has not worked a second job since he contracted the virus,” McGowan said.

“We don’t know how the security guard contracted the virus in the hotel.

“You’ve seen this everywhere all over the world, this virus is insidious, it’s highly transmissible.

“Sometimes we don’t even know if any mistakes or any breaches of protocol took place – we’ll find that out, but it is very difficult to control.”

The Premier was quizzed as to why lessons had not been learned from Victoria, where the hotel quarantine inquiry revealed security guards working other jobs was a serious flaw in its system.

“Working up the protocols around second jobs for security or cleaners or those sorts of things is difficult, because policing it and making sure people don’t do a second job is hard,” he said.

“But that’s the work that has been going on now for a considerable period of time.

“It’s not easy and all the states have struggled with this.”

Australian Medical Association WA president Dr Andrew Miller said it was disappointing to hear the news of the community transmission but praised the government’s immediate response.

“We’re about to find out whether WA can handle tracking and tracing this, it’s great that they’re moving fast,” he said.

“We commend the government for being open about the circumstances surrounding it.

“The next steps now are to get this tracked and traced and under control.”

But Dr Miller said the AMA’s advice to upgrade the state’s quarantine system had been ignored.

“The specific things that we have called for is that these be dedicated quarantine facilities not used for other reasons, that there be proper airborne protection for people who work there,” he said.

“That’s one of the ways that this virus spreads,” Dr Miller said.

“We’ve ended up in this situation, which is going to cause a lot of disruption to people although we remain optimistic at this stage that we’ll be able to bring it under control.”

Hotel quarantine workers in WA have, for the last week or so, been undertaking daily tests for Covid-19.

Dr Miller said that in managing the current situation, it was imperative the government’s testing capabilities were able to keep up with the demand.

“I would have thought that we want to get onto this variant within 24 hours, and that we would just go all night.

“Hopefully, they know what they’re doing in terms of the number of people, the projections for the testing, and they will get it all done in the next 24, 48 hours [for] the potential contacts, because that’s how quickly, unfortunately, you have to track this down.”