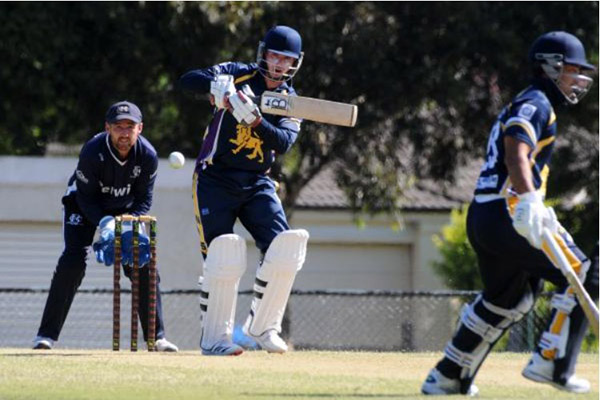 Kyle Hardy during his brilliant century for Narre South

Narre South opener Kyle Hardy produced one of the individual performances of the DDCA season to date on Saturday, crunching a clutch century to bring down Berwick.

It takes a special effort to bring down Matthew Chasemore’s premiership unit, and Hardy delivered for his side as the Lions look to stay well entrenched in the top-four.

Always reliable and solid at the top, it was a knock incredibly well timed for his side.

It’s a result that may well be looked back on in a few months’ time as a crucial one as the tense battle for finals positions continues to heat up.

The all-conquering Bears won the toss and elected to bat, but after a steady enough start from openers Jordan Cleland (26) and Lachlan Brown (47), Wookey medal winner Morteza Ali (3/50) picked up where he left off a fortnight ago, snaring two quick wickets to leave the visitors 2/49.

Matthew Chasemore (35) and Ruwantha Kellepotha (35) ensured the Bears would pick up the momentum, with the reigning premiers posting 186.

Josh Dowling snared another bundle of wickets, with the paceman gathering 4/37 to once again impress with the ball, Ali was a vital cog through the middle with three wickets, all with the Lions forced to re-adjust after losing quick Tim Phillips four balls into his spell and without champion Scott Phillips.

It then took an absolute gem of a knock to inflict the Bears with its first loss of the season.
Hardy – who has played some steady knocks this season – scored his first century at the club since 2013/14, carving up a star-studded bowling attack to make 106 from 138 balls. 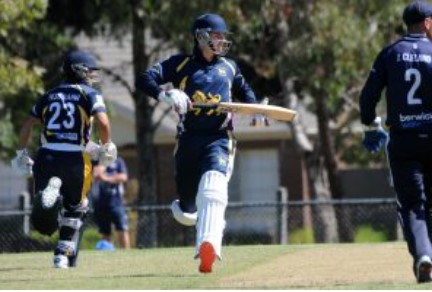 Hardy runs between the wickets

His unbeaten knock featured nine fours and two sixes in a tick over two hours of batting. It was an innings laced with class.

It’s the second Turf 1 century of the season, and it could arguably be a defining one in the Lions’ finals hopes.

Hardy was well supported by star veteran Kaushalya Weeraratne, who struck a fluent 42 in a match-winning 93-run stand.

Weeraratne has been a remarkably consistent force through the middle for the Lions, scoring 263 runs for the season and not scoring under 20 at all. 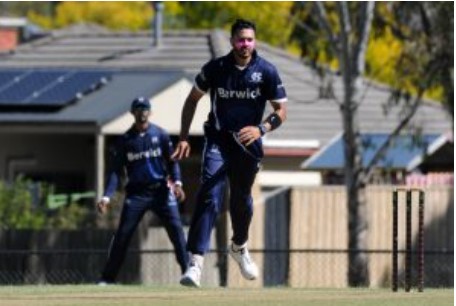 Buckley Ridges were another side to post a vital win on the weekend, with the Bucks dominant against North Dandenong at Lois Twohig.

It’s been an interesting week off-field for the DDCA powerhouse, but the side didn’t let it become a distraction as it draws level on points for fourth spot.

The Bucks found some much-needed momentum with the bat, winning the toss and posting 9/211 from 45 overs, with skipper Jayson Hobbs (57) and reliable keeper Troy Aust (40) both producing handy knocks.

A cracking new-ball spell from Michael Davies (3/25) always had the Maroons on the back foot, with the home side 4/32, before overseas pro Benny Howell stole the show.

The paceman – who enjoyed a stint with the Melbourne Renegades prior to Christmas – produced his first dominant DDCA performance of note, snaring 6/12 from just 6.2 overs as the home side fell over for 95.

Howell has been solid, rather than spectacular in his first two games for the Bucks, but proved on Saturday he’ll be a force as the club pushes for another finals appearance.

Clay McCartney’s outstanding season for the Maroons continued, slashing 41 of the 95 runs for his club as he crosses past 250 runs in 2020/21 already.

As a result of the win, the Bloods are now three points clear on the top of the ladder.

But it was far from a smooth ride for the visitors after winning the toss and electing to bat.

Courtesy of a stunning spell from Zahoor Sarwari (3/20), the Bloods’ top-order fell apart to be 4/23, and matters were made worse when debutant Mitch Cox, Jackson Sketcher and Paul Hill departed to leave the visitors in tatters at 7/44.

But any good side needs the depth when things don’t go to plan. It’s an absolute must in any team that wants respond to any adversity throughout a match.

Akshat Buch (32) and Matt Wetering (30) provided 62 of the most vital runs possible, helping the Bloods give something for the bowlers.

The pair helped lift the Bloods to 122 from 44.3 overs, riding the pressure and eventually getting the scoreboard tickling along nicely.

It was the momentum shift that changed the game as the Bloods bowlers went to work.

The Cobras couldn’t get going as the visitors bowled relentless lines through new-ball pair Matt (2/21) and Sam Wetering (2/11), before left-arm spinner Akshat Buch (4/12) showcased his class to tear through the middle and late orders.

The ex-Dandenong tweaker has been difficult for opposition sides to get away this season, and managed to pick up the key wickets whenever the home side mounted a charge.

With just three batsmen reaching double-figures, the home side were rolled for just 59 with 20 wickets taken on the day from 65 overs and with only 181 runs made.

In the final game of another fascinating round of cricket, Hallam Kalora Park continue to hold firm in the top-four with a gritty display against St Mary’s.

It was a big game for the Saints at Carroll Reserve, with the club celebrating its Past Players Day alongside a special Team of the Decade announcement.

Batting first, the Hawks lost two early wickets, but its in-form batting line up managed to recover, with opener Leigh Booth (35), Matthew Cox (24) and skipper Jordan Hammond (54) all in the runs as the visitors posted a competitive 9/175 from its 45 overs.

The home side gave the chase an almighty shake, with Kasun Niranjana (53) leading the way to have the Saints within touching distance of victory.

But the Hawks rallied and restricted the home side to 9/154, with Hammond (3/39) backing up his efforts with the bat with a strong display with the ball, while spinner Sachith Jayasingha (2/29) was once again incredibly impressive through the middle overs.

With just six points separating first from fifth, round nine looms as yet another vital weekend for several sides.

All eyes with be on Strathaird Reserve when Narre South welcomes Springvale South, Buckley Ridges will fancy its chances of breaking into the top-four when they host St Mary’s, Hallam Kalora Park will be favourites against North Dandenong at Frawley Road, while Berwick will be hoping for a swift bounceback against Heinz Southern Districts.