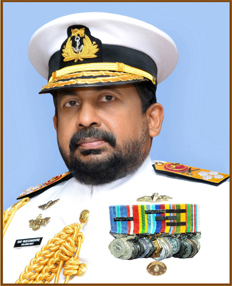 Another goal! Jawa, our 1979/80 Royal Rugby team hooker huffing and puffing and Prabath trying to save the goal. Goal keeper (myself) out of position!

When I became the 20th Commander of the Sri Lanka Navy on 12th July 2015, other than my family members the most happiest group was “Royal College class of 80”, that is my class/Grade mates in 1980 Advance Level class. We decided to embark on tour to Jaffna to celebrate.

I had one plan in my mind for betterment of the children in Islands, mainly for boys. On my courtesy call to His Lordship Jaffna Catholic Bishop, Rt Rev Dr Bernard Gnanapragasam few weeks after becoming Navy Commander, his Lordship emphasized on curbing drugs problem in Jaffna and explained to me how youth were dragged in to this menace. As we all aware, best thing to get youth away from drugs is to introduce them into sports activities. The Commander Northern Naval Area at that time, Admiral Piyal De Silva, after his usual research told me Football (Soccer) is the most prefer sport in Jaffna. Selection of Football, which is not costly (you require football and two goal posts) and very physically demanding sport was a good choice to start my dream project. Our target area was children in islands whom does not have proper sports facilities.

Retired Lieutenant S. Sukumaran, who was a superb footballer produced by the Navy and who was my physical training instructor when I was a Cadet in 1980 was an ideal coach and roped to this project. He agreed to do the job with small allowance paid by our Navy Sports Fund. Lt Sukumaran is very fit, even though he was in late 50s and his ethnicity (Tamil) was an added advantage when communicating with children of Northern islands in Tamil language.

Sukumaran (Suku) selected five islands for his coaching programme. In each island he mustered male children’s force. Age group we were looking at was 12 years to 17 years. Children in islands were delighted. They are going to play football. That is also under a proper Navy coach.

These humble fishermen’s Children, who were looked down by their own community leaders going to play football. The children asked what they should bring for training? Suku said, come in short and t-shirt and carry a water bottle. That’s all? Yes! If you have sports shoes please wear them. If you do not have shoes, no issue. We will give them if you come for practices regularly.

Then Suku in his crisp Tamil explained at every island (five islands were selected- Punkudativu, Karinagar, Eluvativu, Analativu and Delft) children how he started playing football at Anuradhapura long time ago as seven year old child without shoes and how he was selected for Sri Lanka junior national team, how he joined the Navy to continue play football, the support given by the Navy and how he played for Sri Lanka Navy for number of years and how he missed the opportunity to represent National Fooball team.

Suku have gave something to these humble children to dream about!

Most of the young children must have dreamed that night – One day to play for Sri Lanka Football team !

Suku is a very well qualified and an experienced PTI , who has trained me when I was a Cadet. He was part of our PTI team led by late Master Chief Petty Officer PPR De Silva. Suku was given all required equipments from Navy Sports fund , the balls, cones, mini goal posts. Young junior PTI also appointed as his Assistant. Suku started practice with simple drills on dribbling the ball and passing. He wants physical strength of young children slowly to built up to required standard.

I used to call Suku to ask progress on his project time to time.

One thing was worry Suku. That is the nutrition requirements for these boys, which has hampered their growth and built up of stamina drastically. Suku has found some children turning up for practices after school empty stomach, because nothing to eat at home for lunch! Others ate Pittu and soodai curry as lunch. Few eat or afford to eat rice.

When I explained this to Commander Northern Naval Area, Commanding officers of large Naval bases in North came to my rescue. They agreed to give each child a ration pack consists of one kg each of dhal, peas, green peas, sugar, two kg of rice and one packet milk powder from the rations they receive weekly. Cost of each pack was around Rs 1200/=. This weekly victuals package had a huge impact. Our Command medical officer arranged free supply of vitamins.

Parents, specially mothers of these children were very keen on sending their children for football practices, because the ration pack they bring home weekly was a huge relief not only to the child, but to whole family.

Suku had his hands full. He visited five islands once a week. Other than to Karainagar and Punkudativu, he has to take a ferry or small boat to reach there in time (3.30PM) to be conduct practice sharp at 4PM. Punctuality was very important for Suku. Practices continued till Sunset. Then a pep talk with children about their problems. By the time Suku return to Naval Base KKS, where his accommodation is provided, its well passed 8PM. He did this routine for five days a week. Two teams from islands ready for match. Suku as referee

His commitment was unbelievable. He used to say he is doing something worthwhile now rather than wasting his retirement life. Suku says the children in remote islands wait near jetty until his arrival. When boat reach the jetty, they come running to help Suku and his assistant with carrying balls and other equipments. Small children start dancing on the jetty. They were so happy to see their Football coach. Suku knew how to boost the moral of children. I knew his efficient method of inspiring trainees. That is why he was an excellent PT instructor who trained number of Cadet batches in our Naval and Maritime Academy, Trincomalee when he was in service.

Impact on these humble children due to Football program, both on their physical fitness and character building was tremendous. They loved the game. They loved their equipments given for training and protect them well. They were more united. They start to love their country.

Suku teach them to respect the referee when game is played during practices. Suku explained them ‘Referee is always correct! Every player should respect him.” Further explain “ his decision should be respected. It’s like your parents or teachers decision. Some time they give wrong decisions, but we do not argue. We respect that decision. Same here”.

Suku thought them to respect each other. Football is a team game. “Your team has good and weak players. You should protect the weak and play as a team”.

Suku thought them the most important thing in any sport. Respect the players of opposite team. Shake hand with them at the end of the game. Play the game hard as per  the rules.

Suku singlehandedly ran the program very successfully. Some Saturdays inter-Island football matches were organized by respective Commanding officers/Officer in charge of the islands. Whole island come to stand still on that afternoon. Parents, relatives and friends of these children were at the grounds to cheer. Grounds were not very good. More corals and sand than grass in these grounds. It’s amazing how these children play there barefooted.

Complimentary boat services arranged by Navy for small crowd go and see the match. It’s a small Carnival in very humble way for these islanders.

The remote island Eluvativu football team became Champions most of the times. It was a complete surprise to other islands which has better living standards.

We gave something to these downtrodden children of islands. Hope, discipline and physical fitness.

Thanks Suku for your great work!

My classmates visited North on holiday in 2016. Knowing my small program, they want to contribute. They donated football boots and bags to these children. 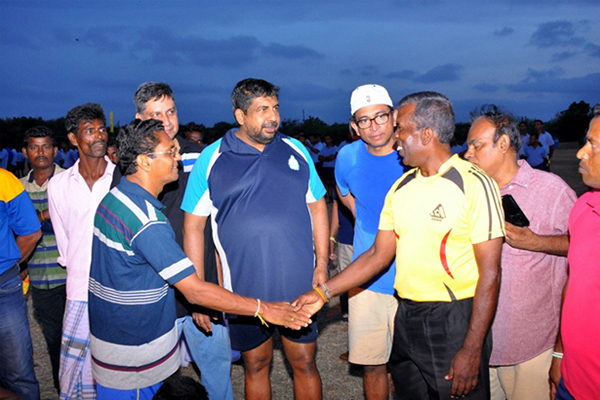 Suku is introduced to my friends of Class of 80 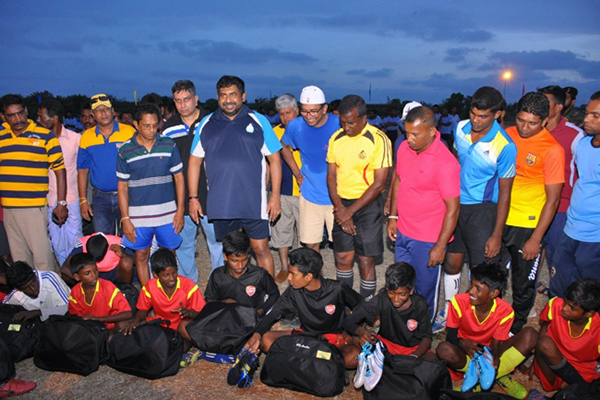 Happy Children with their gifts – bags and boots

We played two match at KKS. First, two teams from islands consists of children. Then champion team of islands verses our “Class of 80” team. On Suku’s instructions, our game restricted to 20 minutes. Suku mummers me that he do not want any of us getting a heart attack! I think very wise decision by him.

All former Royal College Rugby players, athletes and other sportsmen from class of 80 were huffing and puffing after ten minutes. No way we can keep phase with these young children. They were very good in their Basics of the game thanks to Suku. Their passes and placements were correct and they played as a team. All fun for our ladies and children to see how we, class of 80 were struggling and blaming each other for missed scoring opportunities. Most of us felt that day we are getting old !

Class of 80 again visited North last year, just before I retired as Chief of Defence Staff. Now the children who stared this program in 2016 has grown up. They are strong and discipline. Some are already employed. But Suku said they all gathered at football ground in the evening to play and keep fit. We were able to keep drugs away from these precious children of islands. I felt that I did something small to request of His Lordship. Again boots and bags were donated by class of 80 during their last visit. PG Nimalasiri, our own “Marty” sponsored bags from PG Martin leather products. All others members of class of 80 contributed handsomely to buy T-shirts, shorts and boots. 2019 visit. Photo at Sunset at KKS. Children are grown up strong now

Unfortunately, the program is discontinued  during last five months due to Corona virus pandemic.

When health officials give green light, Our Suku will be back to bring joy and happiness to children of these remote islands.