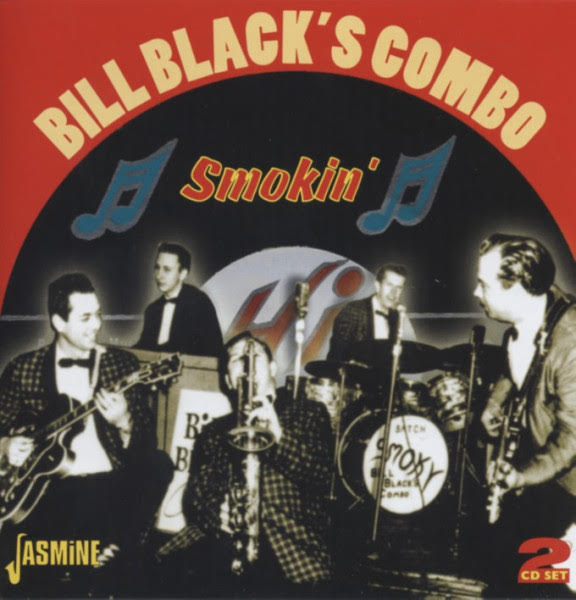 William Patton Black Jr. (September 17, 1926 – October 21, 1965) was an American musician and bandleader who is noted as one of the pioneers of rock and roll. He was the bassist in Elvis Presley‘s early trio. Black later formed Bill Black’s Combo. Black was born in Memphis, Tennessee, to a motorman for the Memphis Street Railway Co. He was the oldest of nine children. His father played popular songs on the banjo and fiddle to entertain the family. Black learned to play music at the age of 14 on an instrument made by his father—a cigar box with a board nailed to it and strings attached. At the age of sixteen, Black was performing “honky-tonk” music on acoustic guitar in local bars.

During World War II, Black was stationed with the U.S. Army at Fort Lee in Virginia. While in the Army, he met Evelyn, who played guitar as a member of a musical family. They married in 1946 and returned to Memphis. Black worked at the Firestone plant.

He began playing the upright bass fiddle, modeling his “slap bass” technique after one of his idols, Fred Maddox, of Maddox Brothers and Rose. Black also developed a “stage clown” persona in the same way that Maddox entertained audiences. Black performed as an exaggerated hillbilly with blacked-out teeth, straw hat and overalls. According to his son, Black said his goal was always to give his audience “a few moments of entertainment and maybe a little bit of humor that’ll tickle ’em for a while.

In 1952, Black began playing in clubs and on radio shows with the guitarist Scotty Moore. Along with two other guitarists and a fiddler, they performed country music tunes by Hank Williams and Red Foley in Doug Poindexter‘s band, the Starlight Wranglers.[4] Black and Moore also played in a band with Paul Burlison, Johnny Burnette, Dorsey Burnette on steel guitar, and a drummer

In 1959 Black joined a group of musicians which became Bill Black’s Combo. The lineup was Black (bass), Joe Lewis Hall (piano), Reggie Young (guitar), Martin Willis (saxophone), and Jerry Arnold (drums). There were several personnel changes. While Young was in the army, his position was filled by Hank Hankins, Chips Moman and Tommy Cogbill. On sax, Ace Cannon took over touring duties from Willis who remained in Memphis for the studio work and movie appearances.[21] Carl McVoy replaced Hall in the studio, while Bobby Emmons replaced him on tour.