Fonterra is blaming an open valve for a spill of 170,000 litres of skim milk into the Tasman Sea from its Whareroa plant in Taranaki. 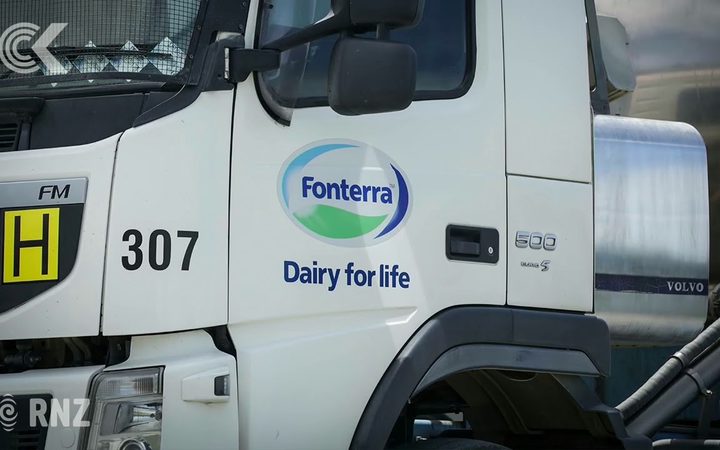 A similar incident occurred at the plant in 2008.
Photo: RNZ / YouTube

The leak left globules of fat dispersed along the foreshore of Ohawe and Waihi beaches, near Hāwera.

In a similar mishap in 2008, the dairy giant spilt 110,000 litres of skim milk into the ocean from the same plant.

“A valve on a pipe that we transfer milk through opened, releasing milk into the waste water drain instead of it reaching its intended location of another milk silo.

“As soon as we became aware of the leak, we stopped the transfer of the milk. However our current waste water system could not cope with the unexpected large volume so the milk overflowed into our ocean outfall.”

The Taranaki Regional Council and iwi were notified immediately.

Maclean said skim milk was soluble in water and an inspection of the outfall shortly after the spill showed no milk in the sea. However, Fonterra staff were sent to remove visible fat deposits from the Ohawe and Waihi beaches.

Its chairman Nigel Nuku noticed the spill, but wasn’t too concerned.

“We’ve had it now and again, but it wasn’t that bad. It wasn’t to the point where I had to jump up and down do anything about it.”

Nuku said the spill did have a visible impact on the beach.

“Oh it’s just the stuff that curdles up when it hits the water, but that’s about all. It wasn’t a heck of a lot. It’s like foam, you know, but it’s noticeable.”

Nuku said in general he was happy with the Whareroa plant’s environmental performance.

But Emily Bailey – an iwi appointee on the regional council’s consents and regulatory committee – was less than impressed. 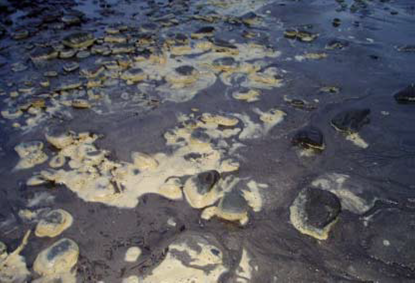 Scum on the beach in Taranaki from skim milk discharged in September 2008.
Photo: Supplied

“It’s pretty disappointing, like there’s quite a lot of incidents that have happened in the past few months from farming, but when you’ve got a big professional company like this opening valves and letting milk flow out into the sea and overload their systems, I would expect better from them.”

Bailey said the leak was symptomatic of wider issues.

“There’s just a lot of pressure on our rivers and our kai moana in the sea around there. You know, kaumatua from around there say they haven’t been able to collect kai moana like they used to out on that coast.

“So companies really need to think long-term. We need our fisheries and we need our clean water. It’s just not good enough.”

In a statement, the council’s director of resource management, Fred McLay, downplayed the severity of the spill.

“In a nutshell, only minor environmental effects were found as a result of this incident. And the circumstances of the spill are still under investigation. There were no water-quality issues to notify to the public.”

McLay did not seem concerned there had been a similar spillage at Whareroa in 2008.

“All consent-holders are held to account when conditions are breached, and the council will take whatever action is required to ensure consent-holders understand the need for full compliance.

“This particular incident was self-notified by the company, whose compliance performance has improved significantly since 2008.”

Meanwhile, Tony Maclean said the company was taking steps to improve its performance.

“It’s disappointing that this incident occurred, but we’re investing $28 million in a new waste water treatment plant which will be operational by August this year. This will significantly reduce the risk of this happening again.

“In addition to this we have made changes to our automation system around the transfer of milk.”

Whareroa, which employs about 1000 people processes up to 12 million litres of milk per day and collects milk from around 1500 farms Taranaki farms.

The regional council will discuss the milk spill at its consents and regulatory meeting next week before consider whether Fonterra should be fined.