Kamala Harris was the best available choice for a few reasons 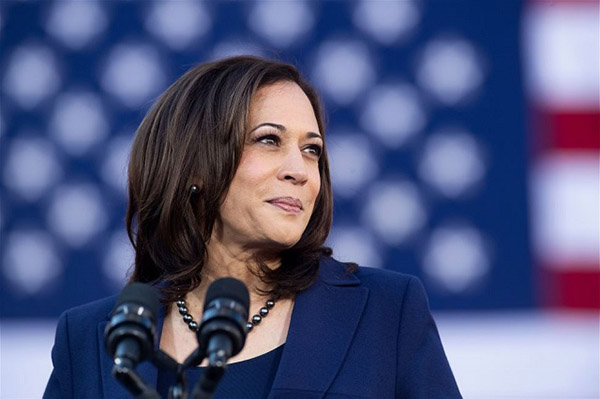 A smile is the light in the window of our soul! White Teeth Smile. Her eyes sparkle when she does. We are so convinced of the goodness of ourselves, and the goodness of our love, we cannot bear to believe that there might be something more worthy of love than us. As the old song goes, “You’re never fully dressed without a smile.” Of course, smiling makes everyone look more attractive and approachable. And she is Kamala Harris – Vice President of the U.S.

The charming woman is tall, with a figure of perfect elegance on a large scale. She has dark and abundant hair, so glossy that it throws off the sunshine with a gleam; and a face which, besides being beautiful from regularity of feature and richness of complexion, have the impressiveness belonging to a marked brow and deep black eyes. She is ladylike, too, after the manner of the feminine gentility of present days; characterised by a certain state and dignity, rather than by the delicate, evanescent, and indescribable grace which is now recognised as its indication. And never has Kamala appeared more ladylike, in the antique interpretation of the term.

It’s a good sign that with his first important decision as a presidential nominee, Joe Biden got it right.

Kamala Harris was the best available choice for a few reasons. Obviously, she’s history-making, the first Black woman to be a major-party vice president nominee. She’s smart and tough and will probably be an effective attacker of the incumbent. She has charisma, she’s relatively young, and standing up there next to Biden.

One of Harris’s major strengths is that she is a stateswoman. She is skilled at commanding a room (or a rally) and asserting her right to take up space. She makes Americans want to side with her, and that will be a useful skill as she works with Biden to guide this country out of a deadly pandemic and a ravaged economy.

It’s a basic competency for any Black woman in public life, and Harris has mastered it at an extremely high level, best indicated by her debate performance against outgoing VP Mike Pence. Her achievements are significant because she has managed to play the balled up long game of both managing the racist assumptions of white voters and appealing to their sensibilities and win. Her appointment shows that it is possible to successfully fend off unjustified racialized attacks and still prevail.

It would be dismissive to simply assert that Harris must be as good as any white VP. As a woman of Black and Indian heritage, she will have to be both Barack and Michelle Obama wrapped up in one. She will be fighting multiple stigmas at once and be held to the standards of both white femininity and Black patriarchy. As we look to her record for proof of her failures, we also must acknowledge that she is pushing a boulder uphill on her own. This would be a demanding battle for any Black woman.

And while she’s only been in the Senate a brief while, she’s made her mark for sure. Most people talk about her questioning of Trump administration officials at the Judiciary Committee, and she’s had some very strong moments there questioning Bill Barr and Kirstjen Nielsen, most notably (I thought her Brett Kavanaugh questions didn’t quite end up going anywhere). But that isn’t all she did. She was also a tough critic of the Trump administration’s separation of immigrant families.

But she’s the right choice mainly for one very simple reason: She was the most expected choice.  Because her selection didn’t surprise anyone, it should be a comfortable and predictable story. Anticipation would build toward her convention speech last week, and then of course Biden’s.

Given that Biden may serve only one term, I think Black voters will be enthusiastic about the idea that she could be the nominee in 2024, and I suspect that’s true even if a lot of young Black voters have reservations about her record as a prosecutor. And she’ll have to answer some questions about that, and she’ll have to answer them well. But… running against Donald Trump and Bill Barr?

But here’s where the metaphor—fortunately—doesn’t hold up. These days, most football teams can score two touchdowns in a minute or two in crunch time. But that’s not possible in politics. Too many voters’ minds are made up (plus, millions will have voted early).

If Trump—or Bill Barr or Ron Johnson—manages to do something brilliant that changes the basic narrative of the race, then Biden will need to change his current modus operandi. But until such time, his modus operandi is working. Steady as she goes. And steady means Harris.

“For four years, you marched and organized for our lives, for our planet, then you voted. You chose hope, unity, decency, science, and, yes truth,” Kamala Harris said.

Invoking the late Congressman John Lewis, she said, “Democracy is not a state. It is an act. America’s democracy is not guaranteed…When our very democracy on the line, with soul of America at stake, with the world watching, you ushered in a new day for America.”

Harris, a senator from Oakland, California, is the daughter of Jamaican and Indian immigrants. She attended Howard University and is also the first person from a historically Black college to occupy the White House.

Her speech took on added significance in light of Trump’s repeated attacks on her while on the campaign trail. In August, he called her “not competent” and suggested his daughter, Ivanka, would be a more suitable candidate for the White House. Trump and many of his GOP allies have also mocked her by going out of their way to mispronounce her name, which Harris dismissed as “childish” and “predictable.”

California Senator Kamala Harris, 56, has made history as the vice president of the United States. She will be the first woman, the first African-American person, the first Indo-American, and the first Asian-American to hold the position.

Harris served as a San Francisco District Attorney and California Attorney General before becoming a United States Senator. After ending her presidential bid during an often-controversial 2020 Democratic primary season, Joe Biden chose her as his running mate. Biden and Harris will be sworn in as president and vice president on January 20 last.

During the campaign, Harris spoke about the historic nature of his candidacy and how he hopes it will inspire others. “It really helps to have examples of what can be done and role models, things that you can point to, to make it clear that it is not impossible and that in fact it is very likely that you can and will do these things.” Harris told Padma Lakshmi in a recent interview.

The real win will be in seeing Harris champion policy that improves the lives of the people who elected her. It will be in making sure that she does not fall prey to the conventional thinking that invented the fiction of the “white working class” as the only demographic with social or economic needs that must be addressed.

Vice-President Harris will live up to her commitment to tag in other women behind her, and reflect her foremothers, into the rarefied rooms of politics, bringing their and our interests with her.

Harris has the potential to change the face of American politics.

Once the presidential election was called for Joe Biden, social media and streets erupted with enthusiasm from people who were even more thrilled about his running mate. These are Americans who now see new doors open for their daughters, their immigrant families, themselves.

The symbolic importance of Harris’ ascent in the centuries-long story of America is undeniable. But just as important is what she could mean in concrete terms for the country that just elected her. The vice presidency carries powers both formal and implicit, and a President Biden is expected to delegate a significant portfolio to the former prosecutor and senator who sits beside him, giving her a chance to shape policy as well as that sense of political possibility.

There is a long legacy of Black women being unwavering advocates for expanding democratic rights for all Americans, going back centuries—long before mainstream political institutions embraced us.

As the first Black and South Asian-American and the first female vice president, Harris will carry the weight of her ancestors into the second-highest public office in the land. This is a position of enormous privilege and power. It offers an unprecedented opportunity to push our country closer to justice and equality for marginalized communities, and for all Americans. The expectations will be high even as we know the opposition to her, especially as a Black woman leader, will be hostile from some quarters.

She is poised to be a pivotal player in international and domestic affairs, thanks to her service on the Homeland Security, Intelligence, and Judiciary committees. She can help direct big issues like criminal justice reform, voting rights protections, health care and wage growth for teachers and other workers, as the second most influential voice in the rooms she is in. Her most critical role, however, may be speaking with President-elect Joe Biden as his most trusted adviser. She will be a perpetual reminder not to neglect the forgotten base, the people of color, especially the Black women and men, who helped elect him, when the white majority turned the other way.

Kamala Harris makes history as America’s first vice president. She has veritably said, “I May Be the First, I Won’t Be Last.” Her angelic smile is the universal welcome.

The writer is an independent political analyst based in Dhaka, Bangladesh who writes on politics, political and human-centred figures, current and international affairs