Parks were a prominent feature of city planning during Ancient Kingdoms even before Buddhism was introduced to Sri Lanka during the era of King Devanampiyatissa (247 BC – 207 BC). According to chronicles, after the arrival of *Arhat Mahinda, King Devanampiyatissa had donated these parks to Buddhist monks to be used as Buddhist hermitages.

According to chronicles, Ranmasu Uyana (meaning Gold Fish Park) had been used as a pleasure garden (Magul Uyana in Sinhala) for the sensual enjoyment by royals, an alternative to those donated to Buddhist monks.

The Park has beautiful, plants, trees, vines as well as flowering shrubs as described in literary texts of Sinhala Literature, beauty and elegance of yesteryear.

According to Professor Senake Bandaranayake, former Professor of Archaeology:

“Sri Lanka is perhaps the only country in South Asia where we still have substantial archaeological remains of formally laid out royal and monastic gardens dating from a period before A.D. 1000. They belong to a tradition of garden architecture and planning that is well documented from the late 1st millenium B. C. onwards.”

According to historical references in *Mahawamsa and *Culawamsa, there had been royal parks and woods during pre-Buddhist Era that were landscaped in the ancient Kingdom of *Anuradhapura, later offered to Buddhist monks by transforming them for monastic use. Mahameghawana and Jotivana gardens in Anuradhapura were such parks used by royals. According to Mahawamsa, these parks had thick foliaged flowering and fruit trees, aromatic plants as well as streams which would have provided shade and coolness to royals. Arhat Mahinda who led Buddhist missionary activities to Sri Lanka from India had stayed in a well-built structure in Mahameghawana in Anuradhapura which indicates that there had been such structures as features of the landscape and architectural designs of parks in Sri Lanka during pre-Buddhist Era.

Located below the earthen bund of Tisa Wewa (a gigantic man-made reservoir, one of the three western lakes providing water to Anuradhapura City) and towards north of *Isurumuniya Monastery, the Park comprises an elongated rectangular area of around 15 hectares. Towards the northern extremity of the Park, there is a small moated precinct with buildings which includes two octagonal pavilions.

Ranmasu Uyana is a garden of around 40 acres renowned for its garden architecture of pre-Buddhist Era as well as its state of the art hydraulics system, the first of its kind. There are many swimming pools in the Park. 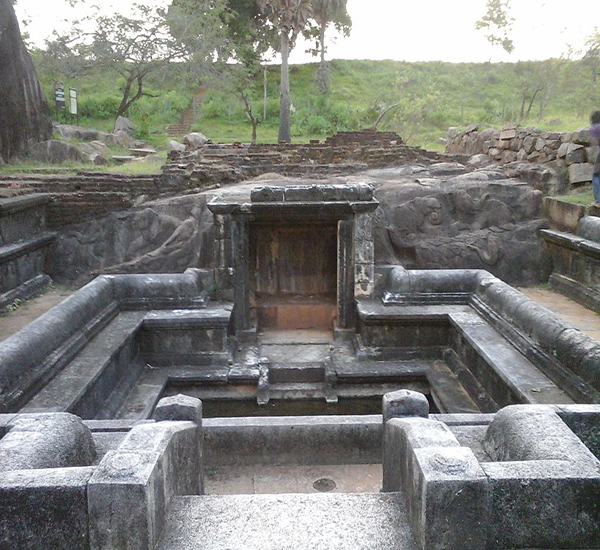 There are two clusters of natural boulders in the southern half of the Park and elongated pools in the east. There are two intricately ornamented stone baths or swimming pools around the central cluster of the boulders. The baths are intricately designed with relief sculptures of elephants sporting among lotus as well as an artificial waterfall with a rock-cut chamber placed behind it. The flow of water is controlled by water cisterns and a complex water system, a great engineering feat of yesteryear.

According to scholars, the well-preserved water system in the Park dates not later than 10th century A.D.

According to legends, the architect of the Park had used rocks scattered in the garden (of the Park) to create it; two rock boulders have been connected using stone labs and there are remains of a small building on these stone slabs.

According to folklore, there had been three bathing ponds as well as smaller ponds which were adorned with water lilies as well as goldfish, derivation of the name “Ranmasu Uyana”.

The largest bathing pond is situated towards north of the Park with rooms cut into stone. There are also intricately carved sculptured elephants bathing on a lotus pond on the sides of the room similar to a cave, marvelous craftsmanship of Sri Lankan ancestors.

Towards the southern area of the rocks, there is a pond with two units and there is a chamber built with slabs of rock on the inner unit.  This would have been used as a changing room by the Royal family.

According to Professor Senarath Paranavitana, Professor of Archaeology (a pioneering archaeologist and epigraphist), the joined ponds had made a shower bath and the royals had been sprayed with water jets, a unique engineering feat of former times.

According to archaeologists and historians, a remarkable feature of the Park is the infamous “Bawa Chakra” or “Sakwala Chakraya”, the Star Gate of Sri Lanka, one of the few Star Gates (Star Gate is considered as a gateway between humans and extraterrestrials) in the world, apart from those in Peru and Egypt.