Many key events had taken place at this historic location, the major event being the signing of the *Kandyan Convention.

The British had served death sentence to Sri Lankan patriots *Madugalle Disawe and *Keppatipola Disawe at this hall.

According to Ananda Coomaraswamy’s ‘Medieval Sinhalese Art’, ‘The names of artificers are not recorded in their work nor as a rule remembered except by their own descendants’ (P. 59). Hence, except in recent works, names of great artificers are rarely mentioned in literary works of yesteryear.

During the early days of British Colonial Era, British Missionaries had used the Audience Hall as a church building for conversion process.

Reverand Reginald Herber, Lord Bishop of Calcutta has described about a sermon held in the Audience Hall in his book ‘Narrative of a Journey through the Upper Provinces in India’ published in 1829;

“…Early this morning the Bishop held a confirmation; there were seven native candidates, and twenty Europeans; and he afterwards preached at the usual time of morning service. There is no church, but the Hall of Audience, where the Kings of Candy held their courts, is used as such; it is a long room, of which the wooden pillars, having the lotus carved on their capitals, are the only ornamental parts remaining. It was a most interesting and affecting sight, to see Christian worship performed, and a Christian bishop blessing his congregation, a part of which was native, in the very spot where the most cruelties were exercised not more than ten years ago. How little could such an event at that time have been contemplated! …”

The present day structure is an extension to the original structure done by British in 1872 to host the visit of Prince Albert Edward, Prince of Wales. According to legends, the British had taken 32 wooden columns from “Palle Vasale” (Queen’s living quarters during the Kandyan Kingdom) and replaced them with brick pillars and 16 pillars had been used for the Audience Hall. Although, renovations were carried out, the British had preserved the original outlook of the Hall without harming its architecture. 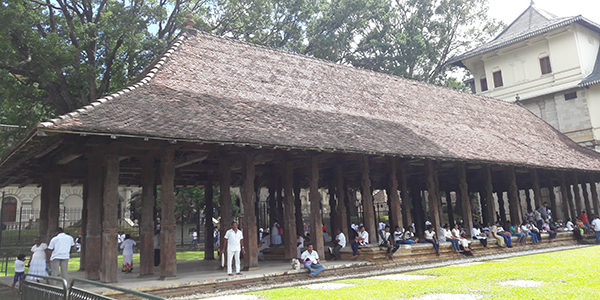 At present, it is conserved under the Department of Archaeology.

Location: Between Temple of the Sacred Tooth Relic and Royal Palace of Kandy