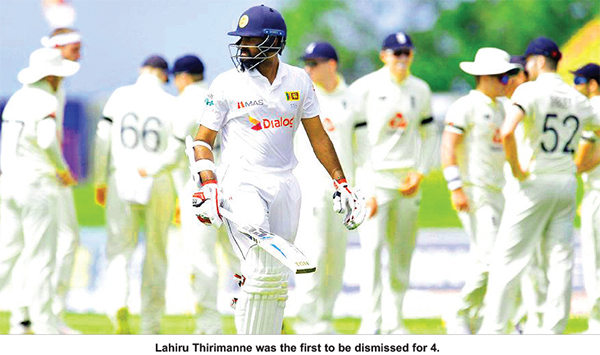 The Sri Lankan cricket team is playing a brand of cricket that is alien to us and their reasoning is inexplicable. When you do not respect the basic principles of the great game, you are taught bitter lessons. Sri Lanka got a fair share of it yesterday here in Galle.

The extended run that Lahiru Thirimanne has got defies logic and the only explanation for him constantly featuring in the team is too obvious. After 37 Tests he averages 22 and at the age of 31, neither are we investing for future nor getting match winning contributions from him. The manner in which Thirimanne gets out puts a question mark on his temperament.

Kusal Mendis’ of course is a different scenario altogether. He has won more Test matches at the age  of  25 than most other Sri Lankans have done. But surely, there’s a technical glitch in his game – lack of feet movement. When he was included in the squad, we were told that he will remain with the squad and coaches will work on his technical aspect rather than him being totally thrown out.

Oshada Fernando perhaps should have got the nod. Or maybe Fernando is not fully fit and strangely for one month now he has been in the team bubble but has not played a single match.

We do not intend to bash Mendis and Thirimanne and leave others off the hook. Not too often a bowler claims a five wicket haul and he is left out of the next game. Vishwa Fernando suffered that fate yesterday. Had Suranga Lakmal got the nod – on his seniority – that was understandable. But Asitha Fernando was preferred due to his better control and ability to reverse the ball. The Sri Lankans sadly don’t have enough runs to defend. They are losing the grip on this game too quickly.

It was a shambolic performance. One was dismissed playing a reverse sweep, another was caught at leg-slip, another slashed hard without much patience while two others drove straight to the point fielder while one man was dismissed backing up too far. It was a day that Sri Lanka would love to forget.  But they have to be realistic and make sure that England don’t walk away with a big lead.

Successful Sri Lankan teams in Galle were good at playing the waiting game and cash in once the bowlers were losing control. But yesterday Sri Lanka were sloppy and lacked discipline.

England lost the openers cheaply. But Jonny Bairstow and Joe Root with a 110 run partnership took the game away from the hosts. The tourists now trail by just eight runs.