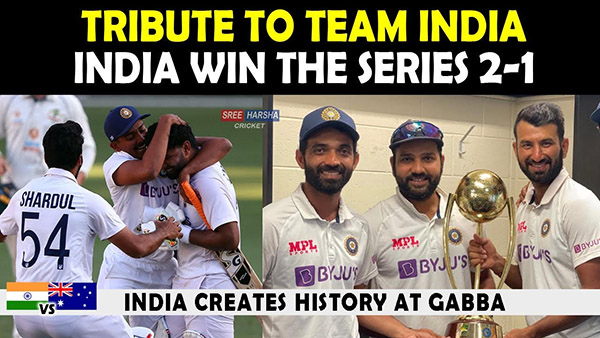 After watching the 4th Cricket Test, held in Brisbane, recently, I have decided that there has been NO better Test match ever seen, in decades of this game that is so popular around the World.  As everyone now knows, India won this superbly fought match, by 3 wickets to claim the Border/Gavaskar trophy and what a match it was !.

Now, as the “news”shifts to the inauguration of America’s new President, cricket (and everything else, it seems), slips silently into the rear of the News-Queue, but once President Biden is comfortably settled in the White house, the Media will, once again, come back into “remembering” things like the fact that INDIA won a Test Match against Australia, it wasn’t supposed to win, in a fit, (if nothing else). Well, let’s just say that I will never forget this particular Cricket Match, and, as always, will make my own comments on what was an outstanding game by both teams.

In order to take this prized trophy home to India, their team had to WIN the 4th Test. Their team had included a few players that “came-in” practically at the last minutes of selection, their Captain, Virat Kholi was back home in India, awaiting the new baby his wife was expecting at the time, their new Captain, Rahane’ (a superb player) himself, had already faced  bitter defeat in an earlier test, where India were bundled out for 36 futile runs, and so, no-one expected them to come out on top, at the Gabba in Brisbane, where Australia had NEVER lost a test match. So what happens, ladies & gentlemen,?

As I have written and said, so many times before, Cricket is simply just another game. In ANY SPORT there has to be a winner and a loser.

A “draw”happens only very seldom.

Winners should celebrate their win, of course, but sometimes expect to lose, and do so, with dignity. In my opinion, India seems to be able to do this much better than Australia does.

Unfortunately, Australian Cricketers seem to “lose their cool” (most if them do, anyway), when they are losing a match. The “sledging” begins, bowling with intent to injure, rather than take the wickets of their opposition, starts.

Although they are a superb team, in their own right, they CANNOT expect to win every game. NOBODY can.

I watched India play their matches in Australia with interest. They showed none of this unnecessary aggression.

Even the bad loss they suffered was taken in a thoroughly professional manner, and I am sure that Cricket Australia would have noticed this.

Undoubtedly, the Australian Cricket team is one of the very best in the World and they fought a good fight in order to try and win this 4th Test, yet unfortunately lost it, I would like to say

Congratulations to India, on your win,

Commiserations to Australia on your loss, this time, the better team won the game, and Cricket Australia, please try to instil discipline into some of your players in future. It will make for a much better game all round.

Turnarounds can never be predicted. Which is why they are called turnarounds. Indian lower order did a magnificent turnaround today that will go straight into history books.

This is our Test to lose from hereon. If we win here, this will be the greatest turnaround after the 2001 India-Australia Test Series. It will be a gigantic moment in India’s cricketing history.

What is interesting to see is that the guys who were involved in the turnaround in this Test – they have scripted amazing turnarounds in their real lives too.

Natarajan is the son of a loom worker who had no money for luxuries like cricket gear and shoes. For many years, Natarajan had to think a hundred times before investing in new shoes. His mother cried when she saw him representing India on TV. His wife gave birth to their son when Natarajan was playing IPL in UAE. He hasn’t even seen him yet because he went straight to Australia in a bio bubble.

Shardul Thakur battled obesity to play for Mumbai and thereafter IPL. No less than Sachin Tendulkar advised him to lose weight for a great cricketing career ahead of him.

Siraj rose to become India’s new ball bowler despite being born to a poor rickshaw driver. His father died and he couldn’t perform his last rites as he was in Australia on national duty.

Washington Sundar’s father – Sundar, was a talented cricketer who was sponsored by his rich neighbour throughout his local cricketing life. His name was Washington. The man passed away just before Sundar’s second son was born. Sundar named his son Washington as a tribute to his benefactor.

Navdeep Saini’s father was a government driver and could not afford expensive cricket coaching for his son. So Saini played exhibition matches on tennis ball at Rs.300 a match to fund his dreams.

All these guys came together as debutants and have turned this match over its head. All their lives they were waiting for this moment in their cricketing career. All their failures, all their struggles, all their doubts and all their insecurities – all that was settled once and for all in this Test match. When presented with an opportunity, they fired themselves up and attacked Australia with all guns blazing.

In this series, more than any other Test series I have seen in my life, the Indian Cricket team has proven their naysayers wrong. They have sustained tremendous pressure and taken hard knocks all over their bodies against one of the best Australian attack ever. And by doing so, they have made us realise that while 5 hour IPL matches can create instant celebrities, Test Cricket, which stretches over five days, creates real heroes.

Celebrities sign autographs, but heroes continue to inspire the nation decades after they retire.