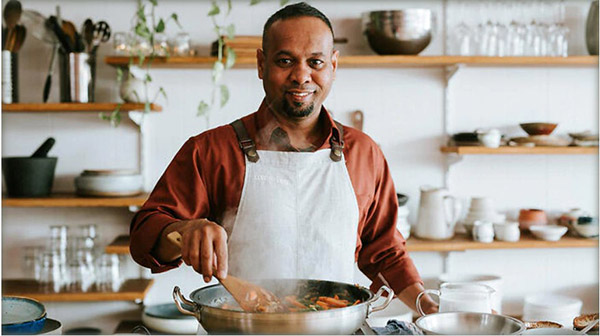 Nige Sithirasegaram learnt how to cook while in Australia’s detention centres. Now he’s sharing his culinary education with the community.

Nige Sithirasegaram learnt how to cook during his six years in Australia’s detention centres. Now, the third-generation Sri Lankan fisherman shows you to recreate his dishes in your own home.

“When I was a kid, I asked my mum a lot of questions about food,” says Nige Sithirasegaram, a cooking instructor at Melbourne’s Free To Feed social enterprise.

As his mother prepared dishes, he’d quiz her on why she’d sprinkle salt, pour coconut milk and add blistering chilli — the key steps and ingredients that flavoured her Sri Lankan food. Sometimes the questions became overwhelming for her: “Get out of the kitchen!” she’d say. That didn’t stop him from eavesdropping on relatives and neighbours, as he tried to learn more about spices and other culinary knowledge.

“I wasn’t cooking in Sri Lanka much, because a man is not allowed to cook in Sri Lanka. It was all women,” he says.

Sithirasegaram did, however, follow the family tradition and become a third-generation fisherman.

“The first time I went fishing was with my cousin,” he recalls.

He grew up on Sri Lanka’s northeast coast in the port city of Trincomalee. At age 11, he remembers chasing after squid just a kilometre from the beach. The waters weren’t deep – and this experience was a good start. He just had to conquer his seasickness before he could graduate to fishing for tuna, then catching snapper.

His love of fishing was disrupted by the Sri Lankan civil war, which began in 1983. Twice his family had to flee to an Indian refugee camp to stay safe – they were targeted because of their Tamil backgrounds.

Things only got more dangerous as he got older. In 2003, he was apprehended after catching snapper on his fishing boat. “That time the Navy arrested me at my house. They said I was smuggling weapons,” he says.

“One night, a paramilitary group jumped my house and put a gun in my mouth. My wife was screaming and my son is screaming and crying,” he recalls. “My wife said, ‘I’m a teacher, we’re not criminals!’”

By then, he’d seen dead bodies on the street; he knew of people disappearing, that torture took place.

Sithirasegaram was separated from his family and ended up spending six years in Australia’s detention centres.

During these long days of confinement, he learnt how to cook: he’d ring his wife for her culinary advice and instructions. Sithirasegaram was allowed to buy ingredients under supervision. His dishes only improved and he was surprised when people at the detention centre noticed.

“Some of the [detention] officers said, ‘nice, your food seems really nice. You make [me] hungry!’” he says.

Sithirasegaram started by mastering dahl and rice, then any kind of curry he could (sometimes eggplant was the star of his curry; other times, it was fish, green beans or chicken).

“Some of the [detention] officers said ‘nice, your food seems really nice. You make [me] hungry!’”

His skill set came in handy after leaving detention. During his time running social enterprise Tamil Feasts’ dining events at CERES Community Environment Park in Melbourne, he cooked for 75,000 people over five years.

As an instructor with Free To Feed, which offers refugee-led cooking lessons, he’s presented classes over Zoom, in person and is currently the star of its home-cooking All Together Now initiative, which works by employing refugees and people seeking asylum to share their food and culture with the community. Sign up and you’ll receive a recipe booklet, ingredients that are hard to source, conversation cards and an invitation to watch Sithirasegaram’s virtual cooking lessons from your home. While he shows you how to make his aunty’s chai butter cake, his wife’s coconut-fried squid, the vegetarian green bean curry that his family served on Fridays back in Trincomalee and more, you’ll also hear his life story and Sri Lankan roots. “I teach our food, culture and story,” he says.

His wife, who has tuned in from Sri Lanka, has already given him feedback about his All Together Now classes.

“She said, ‘you’re cooking better than me’.”

He adds, “I told her, one day I’ll cook for you when you’re in Australia.” Sithirasegaram hopes to be reunited with his wife and son one day — he hasn’t seen them since fleeing Sri Lanka in 2009.

He also wants to launch a Sri Lankan food truck one day.

“At the moment, I don’t have enough money. I’m working at the moment [at] Coles, full-time. One day I’ll buy a truck,” he says.

In the meantime, he dreams of the curries, dosa, chicken pakora, kottu and other dishes he’ll serve.

“I already have a lot of ideas,” he says.