Ten first-choice players unavailable or injured for at least part of the series, including the talismanic captain who happens to be the best player. Crowds and opposition players alike hurling abuse, amidst pockets of racist taunts in the stands. Many players spending up to five months in a strictly-controlled quarantine bubble, one player missing the birth of his first child, and another the death of his father. Facing, statistically at least, the best Australian bowling attack of all time, on their hallowed home turf, and being bowled out for the side’s lowest-ever Test score in the opening match. A gruelling four-Test series culminating in a record chase required in the deciding Test at a venue at which Australia had not lost in 33 years.

And yet, India, caught in the middle of a bloody cage fight with adversity, refused to succumb. Beaten, battered, bruised, at times humiliated, the team pulled off the most remarkable, backs-to-the-wall Test series win of all time on Australian soil, the greatest ever by an Indian side, and indeed among the most thrilling and unexpected Test series victories of all time.

Bowled out for 36 in Adelaide, India saw their captain depart to attend the birth of his first child. They also saw their second-best bowler, Mohammed Shami, sidelined by a broken arm. At this point, former greats like Ponting, M Waugh, Clarke and Vaughan predicted a 4-0 whitewash.

On a dicey Melbourne pitch, stand-in captain Ajinkya Rahane compiled a masterful century to rescue India from the depths of despair to level the series. That win too, came at a cost; again, second-best bowler, this time Umesh Yadav, was ruled out of the next Test, this time with a calf injury.

In Sydney, India were once again rescued from the brink to keep the series level, first by Pujara and Pant, then by Vihari and Ashwin, the latter two forming a devastating quartet of casualties for India from that Test along with key strike weapon Jasprit Bumrah, and all-rounder Ravindra Jadeja.

Leading into the fourth Test at the Gabba, it would be trite to say an Indian win was the stuff of dreams; not even in their wildest fantasies would Indian minds have dared to drift to the realm of believing a series win was possible. The Indian attack leading into the Test had a combined total of 13 wickets, against the Australians’ 1,046. That meagre tally fell to single digits after seamer Navdeep Saini was injured on day one of the Test. 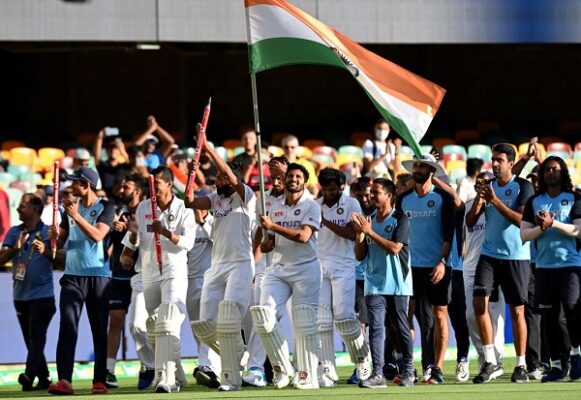 Not since 1988 had an Australian side succumbed at the aptly named “Gabbatoir”, and that came at the hands of a truly great West Indian side which featured the likes of Marshall, Patterson, Ambrose and Walsh. Indeed, Australia’s name on the summary of the fourth Test featured Test greats in Smith, Cummins and Hazlewood. But India’s top run-scorers and wicket-takers? The unheralded Gill, Siraj, Natarajan and Thakur, none of whom were expected to play a single match in this tour, the latter two retained after the limited overs matches primarily as net bowlers.

Other contributions shone brightly too, at both ends of the spectrum; 23-year-old Rishabh Pant hit an explosive 89*, while the indefatigable Cheteshwar Pujara, hit on the body over a dozen times by hostile missiles hurled at over 140 kph, eked out 56 off 211 balls.

India’s was not just a team performance; it was a squad performance to rival any in sporting history.

The team could have escaped with heads held high even if they had lost the final Test, let alone drawn it to retain the Border-Gavaskar Trophy, a prize they already held (and a trophy that will have now increased exponentially in value). There would have been no recriminations for admitting mortality.

Yet in pursuing and then securing a win that seemed all but hopeless, the Indian squad have guaranteed themselves immortality.

Don Bradman’s 1948 “Invincibles” side played 32 matches in England without being beaten. Tours of that nature are long gone, and that title must retire with that team in eternity.

Yet in their tenacity, their bravery, their sheer bloody-mindedness – this Indian team have earned another title. If a dictionary were to feature an illustration for the word “indomitable”, it would be appropriate to include a picture of this Indian squad.

Nearly everything went wrong for the Indians this series, but they still found a way to make it right.

In doing so, they wrote a story that will be told for generations to come.