By Kagondu Njagi for Reuters

Sitting on a low bench at her shop in a Nairobi slum, Grace Wangari sifted through a handful of grains that a waiting customer had just ordered.

As she poured them into a shopping bag, the customer scrolled through her phone to pay for the purchase. 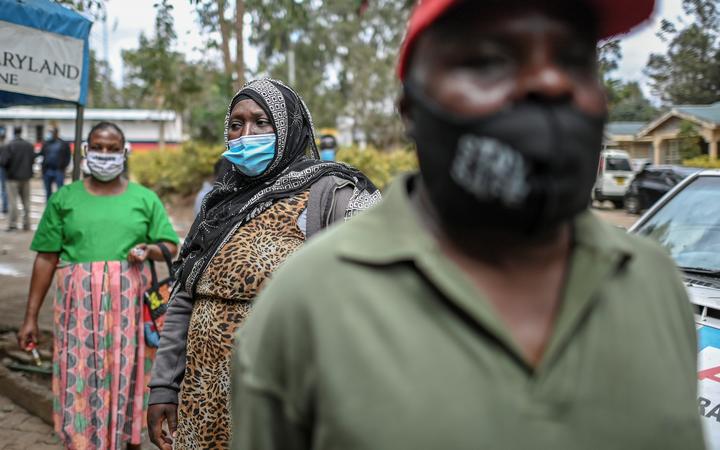 Normally, Wangari would have been paid in shilling notes, Kenya’s hard currency, but in some ways she preferred the digital payment that was instantly transferred to her phone.

“I am happy with this transaction because there is no risk of losing my stock to conmen or people who have come to take goods on credit,” said Wangari, a middle-aged trader in Mukuru Kayiaba, one of the city’s poorest slums.

The transaction happened through Sarafu, a blockchain-based community currency that is helping thousands of Kenyan slum dwellers pay for food, water and sanitary items as they battle through the Covid-19 economic downturn.

Each week, families are issued with virtual vouchers worth 400 Kenyan shillings ($NZ5.60), which they can use to buy essential goods, said Roy Odhiambo, an innovation officer at Kenya Red Cross Society (KRCS), one of the groups behind the project.

Vendors can then send the vouchers to Grassroots Economics, the Nairobi-based social enterprise that co-developed Sarafu (“coins” in English) with US-based engineering firm BlockScience, and redeem them for cash.

Odhiambo said more than a third of the vendors in Mukuru are already signed up to the project, which launched in 2019 with the aim of helping struggling families get hold of everyday basics without worrying about having cash on hand.

Now the project is providing a lifeline for families trying to cope with the financial pain of the pandemic, he noted.

Antony Ngoka, a field coordinator with Grassroots Economics, said thousands of slum residents, who are mostly casual workers, have lost their jobs during the pandemic.

Unable to get loans from traditional banks, many become easy prey for loan sharks, he added. 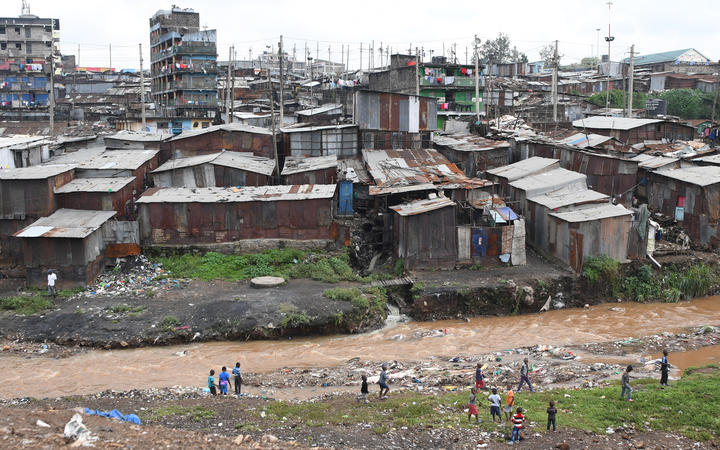 Children play next to Nairobi river in the Mathare valley slum in Nairobi, Kenya. File photo

“Blockchain can foster local trade by tapping resources that are ignored by mainstream businesses. It also increases levels of trust among struggling communities,” he said.

In Mukuru Kayiaba slum, about 9km away from Nairobi city centre, some 4000 residents have registered with Sarafu, according to Odhiambo of KRCS.

Developed with funding from global government donors, the platform can make an average of up to 1 million Kenyan shillings ($12,600) in daily transactions, Odhiambo said.

Unlike cash aid, which can be spent on anything, Sarafu can only be used to pay for essentials such as food, health supplies and educational resources, he explained.

And, he added, because the platform runs on blockchain, meaning all transactions are tracked and transparent, that ensures people are spending the money only on necessities.

Odhiambo said KRCS is currently working with the Danish Red Cross and Innovation Norway, the government’s business development agency, to roll out Sarafu across Kenya.

But, seeing the platform as a threat, loan sharks are using political and financial manipulation to lure Kenyans away from it, said Ochieng’, the rights activist.

Informal lenders recruit people to spread rumours that blockchain is a Ponzi scheme with no backing from local leaders, a tactic that has successfully stifled the uptake of other blockchain-based projects in the past, he explained.

“The aim of loan sharks is to divert people from innovations that are helping them access basic services in the slums without having to pay interest,” Ochieng’ said.

They also pull in customers by offering much higher sums than they can get through Sarafu, with exorbitant interest rates, he added.

Violet Muraya, who sells water in Mukuru slum, said informal lenders can offer loans up to 10 times larger than anything available through the community currency.

“When people have emergencies and need huge amounts of money, they cannot use Sarafu. So, they go to loan sharks for help and end up being trapped in financial slavery,” said Muraya.

Odhiambo said the Kenya Red Cross Society is running education and awareness-raising campaigns in areas where the project has been rolled out, to reassure users that the platform is safe and fair.

“At first there was resistance … because of the propaganda. But the community has accepted this cashless transaction because they know it is not some type of betting or loan facility,” he said.

‘No one is going to sleep hungry’

At Isaac Makavu’s food kiosk in Mukuru, customers lined up to order his steaming rolls of baked flat bread, chatting about an upcoming Premier League football game and sharing funny stories about their day.

Makavu said Sarafu has helped people in his community avoid eviction during the pandemic by allowing them to save their cash.

Some come together to pay each other’s rent through table banking, a form of savings scheme where a group contributes a set amount of money every month and then uses that money to help members who need it.

Charities say evictions have been rife in parts of East Africa during the pandemic. In one instance in May 2020, Human Rights Watch reported more than 8000 people living in two Nairobi slums were evicted from their homes.

“But there have been no evictions in areas where Sarafu is being used by slum communities because they were able to pay their rent on time,” Makavu said.

“No one is going to sleep hungry here because they have community currency.”