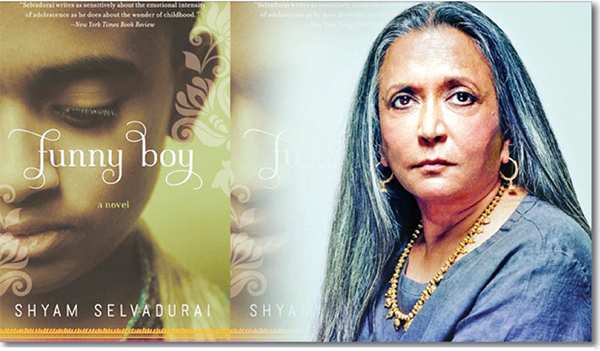 Here is another film success story and this time it is more relevant to us Sri Lankans, so celebration is called for; any optimistic silver lining being welcome in these dark days of fear of infection. I speak of the release, attracting the world’s art and film attention, of Shyam Selvadorai’s early, acclaimed 1994 autobiographical novel ‘Funny Boy’ which won the Books in Canada First Novel Award. Direction is by famed, many awards winning Indian Canadian Deepa Mehta who is familiar with Sri Lanka having filmed the second of her elements trilogy ‘Water’ with a few Sri Lankan actors and discovering a fine child to play the pivotal role of the very young widow in the story. She had to shift to our country due to protests in India and even the burning of the sets that had been erected for filming. Producers are her husband, David Hamilton and Howard Shore. Filming was on location in Sri Lanka in 2020, completed around October. Shyam wrote the film script and many of the actors are local with a few of the major roles portrayed by Indian actors.

The film was released on December 4, 2020. Netflix announced its release on 10 December, but I failed to get it on screen so far. However plenty of information on the film and video clips are available on-line.

The story and actors

Selvadorai starts his story in 1974, set in Colombo, of a well-to-do Tamil family; focus being on the middle child – Arjie (played by Arush Nand and later, Brandon Ingram) who is different in behaviour to boys, causing his father (Ali Kazmi) annoyance and insisting on cricket and growing up to be a man His mother (sensitively played by Nimmi Harasgama) understands him better and encourages his love of music, dancing and creativity. His rebellious aunt Radha (Agam Dharshi) proves to be a saviour of sorts, the only familial supporter, painting his toenails crimson and revealing her love affair with a Sinhalese. Arjie’s homosexuality is self realized and expressed when co-schoolmate Shehan (Rehan Mudannayake) reciprocates. Neither the word ‘gay’ or ‘homosexual’ are mentioned. Remember the Sri Lankan obsolete laws criminalize homosexuality. An important scene is when Arjie asks his parents: “Why does everyone say I am funny?” This before he discovers he is a Funny Boy. Then come the 1983 riots and pogrom against Tamils, first in Colombo and spreading to other parts of the island. The family is affected and decide to migrate to Canada.

Brandon Ingram (35) is a local theatre person in advertising and reading for his MA. Sitting in the Barefoot Café with a friend, he was surprised to receive a message from Shyam – so far only an acquaintance. The message said that Deepa Mehta would audition him for the role of the grown Arjie in Funny Boy. Nimmie Harasgama is a known film person both in Sinhala feature films and English documentaries; so is Rehan Mudannayake having produced films himself.

Jude Dry in IndeWrite titles his comment: ‘Gorgeous Queer Coming of Age Tale set in divided Sri Lanka.’ “Intimate and beautifully rendered, ‘Funny Boy’ is a visually lush coming-of-age drama set amidst a vicious ethnic conflict that is regionally specific, but tragically universal. It is the latest feature film from revered Indo-Canadian filmmaker Deepa Mehta, who first rose to international renown in 1996 with ‘Fire,’ a groundbreaking lesbian romance that was censored in India after screenings led to violent protests and the destruction of movie theaters. Though ‘Funny Boy’ is a far more chaste film, it may find more controversy for its portrayal of the 1983 riots, or Black July, the anti-Tamil pogroms that began the 26-year Sri Lankan Civil War.”

Another comment: ‘Toggles awkwardly between the general and the specific.”

Ben Kenigsberg writes: “Mehta’s elaborate long takes contribute to the general sense of tumult but the film never fully shakes the sense of stating the obvious. Ethnic conflicts tear relationships apart. Being gay is normal. Cricket does not have to be all that.”

I am unable to add any comments, not having been able to see it on Netflix.

We were prideful when it was announced that ‘Funny Boy’ was being submitted for an Oscar as the Canadian entry for the Best International Feature Film at the 93rd Academy Awards -2020. However it was disqualified due to not meeting the Academy’s requirement that fifty percent of the dialogue be in a language other than English.

As the expression goes, Shyam Selvadorai needs no introduction. Born (1965) and bred in Colombo, attending Royal College, Colombo 7, his family suffered from the riots against Tamils starting in 1983 and thus they migrated to Canada. Shyam was 19 then. He studied creative and professional writing as part of a Bachelor of Fine Arts programme at York University. Apart from the acclaimed Funny Boy his other well known novels are Cinnamon Gardens (1998) and Swimming in the Monsoon Sea (2005). In 2014 he edited an anthology of Sri Lankan prose and poetry in all three languages, the Sinhala and Tamil being translated to English, and titled the volume: Many Roads through Paradise: An Anthology of Sri Lankan Literature.

One noteworthy feature that has to be mentioned is that he is a successful, internationally well known author who comes back frequently to the country of his birth and helps the less privileged and those discriminated against. He conducts workshops in English and creative writing in Jaffna and the North. He curated the Fairway Galle Literary Festival in 2016 and 2017 and maybe introduced, but definitely carried out the FGLF’s outreach programme in Jaffna. He motivated the publication of short stories written by those who par 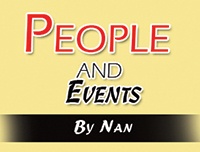 ticipated in his reconciliation workshops.

Most noteworthy is that he is a friendly person with not an iota of pride or exclusivity. I mention this as I have felt another author who migrated and backgrounds most of his novels on Ceylon/Sri Lanka appears rather ‘remote’ and visits to promote his books. Shyam is different, as Michael Ondaatje is, with love for their birth country still burning bright. Shyam is close to local friends and greets and makes it a point to speak to even mere acquaintances. He may be Canadian by choice (of parents) but very much Sri Lankan in his charm and down-to-earth attitudes.

It is noted that Deepa Mehta seems to have a preference for adaptation of published books to the medium of feature film. Examples: Salman Rushdie’s Midnight’s Children and Cracking India. and now Funny Boy.

Born in 1950 in Amritsar, she graduated from the Universities of Delhi and Toronto. Film making attracted her and while working in India, she met and married Canadian film producer Paul Saltzman and migrated to Canada in 1973. She soon became a well-known film director and producer, directing two episodes of George Lucas’ Indiana Jones. She collaborated on writing the film script of Salman Rushdie’s Midnight’s Children. In 1983 she divorced Saltzman and later married film producer, David Hamilton. Among other awards she won the Lifetime Achievement Award (not mentioned which; may be Grammy award). Along with Mira Nair, she blazes across the media of film.