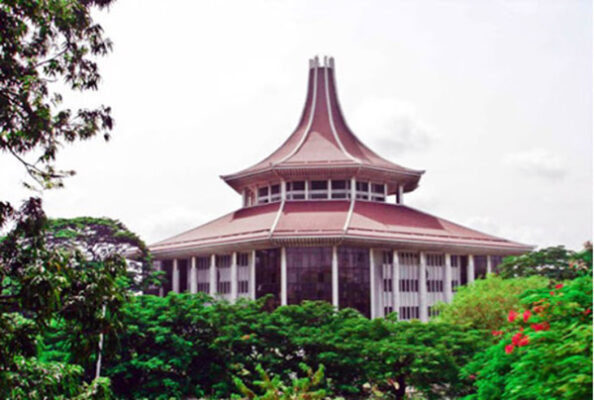 One of the occupational hazards of the editor of a newspaper is to suffer for other people’s sins. There is, of course, a sacred precedent for this kind of undeserved torture: but you cannot put up that plea in mitigation of the punishment when you stand face to face with the majesty of the law. In case you are eager to know what I am driving at, let me say at once that this is just a preamble to a story about an illustrious editor of the Ceylon Daily News who escaped by the skin of his teeth from spending a holiday in the Welikade Prison.

His name is Herbert Hulugalle, who joined the ‘Daily News’ in 1918, when the paper was a toddler and helped the proprietor, D.R. Wijewardene for 30 years to tend it until it grew up to be a mighty giant. For 17 of these 30 years he was the Editor and made the newspaper the most powerful driving force towards Ceylon attaining political freedom. He severed his connection with journalism only after Ceylon became independent and then proceeded to shine in other fields. Hulugalle’s monumental work ‘The Life and Times of D.R. Wijewardene” is virtually the most authoritative and gripping narrative of perhaps the most exciting period of our history.

The seed of the trouble in this case was eventually traced to some busybody in the Law Library, who wanted to ingratiate himself with Wijewardene by feeding him with what he thought was a juicy tit-bit. Forty years ago, as now, the Law Library was a sort of clearing house for gossip and the younger practitioners waiting for briefs revelled in stories which had the slightest odour of scandal. They gave flesh to the bare bones of the naughty rumour and embellished it in such a way that there was a big gap between the authorised version and the revised version that was circulated in the corridors of Hulftsdorp. The story that reached the ears of Wijewardene, however, lacked the usual salacious sauce. It was built up on a much more serious theme, namely, that the Supreme Court judges were giving themselves holidays to which they were not entitled. It was a report without any foundation whatsoever but it was good material for a powerful editorial.

Wijewardene soon got going. He was not the man who allowed the grass to grow under his feet. The Lake House telephone bells started ringing, but the Editor, Herbert Hulugalle, happened to be away. Wijewardene got hold of the next best man in the office to give expression to his indignation. He happened to be J. L.Fernando, who for many years wrote the Parliamentary summary and the weekly political notes for the ‘Daily News.’ From the tone of the Chief’s voice, J. L. Fernando knew that something strong had to be written, and that, quickly. Fernando, who was an Oxford man, put his best foot forward and produced the stuff. To make matters worse from the legal point of view, he gave it the somewhat sarcastic but sinister title ‘Justice on Holiday.’ Then everybody went to bed, happy that the day’s good deed had been done.

But the euphoria did not last long. At the bewitching hour of midnight something stirred. It was Wijewardene’s conscience. The Chief, whose journalistic instincts for self-preservation were highly developed felt there was something wrong somewhere. He went back to bed with an uneasy feeling, but woke up at half-past four in the morning when the offending sentences began to haunt him again and again. According to what the Boss told Hulugalle, his first impulse at dawn was to take up the telephone and have the editorial altered. But it was too late. Before the cocks began to crow Wijewardene was consulting his lawyer friends to prepare a defence. Shortly afterwards, the fat was in the fire. There in the dock stood the meek and mild Herbert Alexander Jayatilleke Hulugalle, the innocent victim of circumstances, perhaps paying the penalty for some sin he had committed in his previous birth. As the Editor of the ‘Daily News,’ he had to take the full responsibility for what appeared in his paper. He knew it, the proprietor knew it, the leader writer knew it and, above all, the Judges knew it. 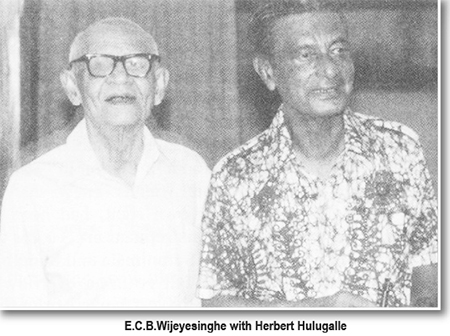 There he was, arraigned for Contempt of Court before a Full Court which is an awesome thing under any circumstances. All the King’s Counsel and all the King’s men, down to the humblest Fiscal’s peon, came to watch the show. In Hulftsdorp and the precincts it was like a Roman Holiday with a harmless Christian being thrown to the lions. The Court consisted of the Chief Justice, Sir Sydney Abrahams, Mr. Justice M.T. Akbar and Mr. Justice F.H.B Koch. Wijewardene retained two of the most eminent practitioners at the Bar to defend Hulugalle. They were R.L. Pereira, K.C, and H.V. Perera, K.C. A better combination could not be found. When the talking began, it became apparent that Sir Sydney Abrahams was riled, not only by the editorial, but by an affidavit for the defence prepared by the great E.J. Samerawickreme, K.C. himself. That affidavit was so ingeniously worded that it sought to make excuses for the editorial without making a full apology. That annoyed Sir Sydney a little more. For the fact of the matter was that there was no defence whatsoever for the offending article. The judges had merely taken a vacation to which they were fully entitled under the Courts Ordinance, which the busybody at the Law Library had misunderstood.

Sir Sydney Abrahams, the principal actor in the drama, eventually became a member of the Judicial Committee of the Privy Council. He was Chief Justice of Ceylon for three years from 1936 to 1939. Of Jewish extraction, he was one of a trio of brilliant brothers, all of whom excelled at Cambridge in studies as well as in athletics. Before he came to Ceylon he was Chief Justice both in Uganda as well as Tanganyika. As an athlete, he represented Cambridge against Oxford in the long jump and 100 yards for three years, and then went on to be chosen as the British representative in the Olympic Games at Athens and Stockholm. He was the World’s Amateur Long Jump Champion in 1913. An athlete of that calibre had never before adorned the Supreme Court bench of Ceylon and he was generally regarded not only as a great sportsman but as a good sport. But even sportsmen lose their temper when for no valid reason, people try to be funny at the expense of the highest tribunal in the land. All the judicial lions, however, were not in the mood to devour their victim, but their leader could not be restrained because the highest court in the land had been held up to ridicule on baseless grounds. It was the title of the editorial, ‘Justice on Holiday,’ that hurt more than the contents.

As a mild concession to the “Daily News” which then took pride in describing itself as the watch-dog of the nation, the accused was unleashed for the moment and allowed to sit behind his defenders, which he did biting only his own nails or what was left of them. Money was of no consequence to Wijewardene when it came to a fight. He was always ready to do battle for the freedom of the Press and stand up for his staff. In this instance, however, he knew he was on a sticky wicket. Hulugalle was sentenced, without much demur, to pay a fine of Rs. 1000 and to “imprisonment till the rising of the Court.” The fine was paid promptly because Wijewardene had sent one of his two trusted men, P.C.A.Nelson or E.E.C. Abayasekera, (I forget which one), with a large bundle of currency notes to cover ten times the prescribed punishment, in case it was only a fine. 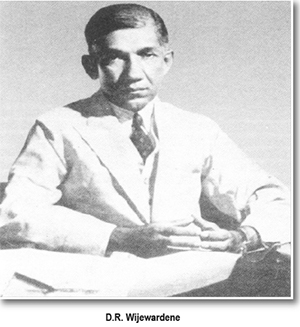 But the fly in the ointment was the second part of the sentence. Imprisonment is imprisonment, whether it is till the rising of the Court or the arrival of Doomsday. Wijewardene’s strategy was now confined to finding a face-saving device. He decided to appeal to the Privy Council in London and retained Gavin Turnbull Simonds K.C. with Hugh Imbert Hallett, K.C. as junior. On the very day that the appeal came up Simonds was made a judge of the Chancery Division of the High Court. This was just a stepping stone of the Lord High Chancellorship of Britain. Hugh Hallett, K,C, also rose to be a High Court Judge, Queen’s Bench Division. All of which goes to show, that as in Ceylon, the best legal brains in England were harnessed to save Hulugalle. But alas, Justice was not on holiday even in the Privy Council and the appeal was dismissed. When the record of the case came back to Ceylon, Hulugalle was hauled out of his editorial seat once more in order to serve his sentence.

Luckily for him, he still possessed the black coat and striped pants in which he had taken his oaths as an advocate. Shaking off the moth-balls from these garments which he had not worn for fifteen years, Hulugalle slipped into the Supreme Court like a thief in the night, to take his punishment. Those who recognised him, wondered what he was doing in this strange attire. He sat among the advocates, poring over a New Law Report, but all the while serving his sentence till the rising of the Court. At the lunch interval the Registrar of the Supreme Court, Guy O. Grenier, an old friend, virtually took Hulugalle by the hand and led him to his sanctum where they shared Grenier’s sandwiches. Back in Court, Mr. Justice Poyser, the presiding judge, who had a keen sense of humour now seemed to be aware of the comedy of Hulugalle’s incarceration, as the accused was slipping in and out of chairs and pretending to be deeply absorbed in law books which he had not touched since he left the Law College, where Mr. Justice Akbar was one of his teachers. Poyser rose to the occasion. For some unknown reason he adjourned the Court much earlier than usual indicating the fall of the curtain on the case.

Poyser bowed to Hulugalle, Hulugalle bowed to Grenier and Grenier bowed to the Counsel, while the Court Crier shouted himself hoarse in a tone suggesting that justice will be done though the heavens fall. Hulugalle quietly proceeded to Lake House, where he received a warm welcome from his colleagues, but better still a substantial cheque from his Boss to compensate him not only for his pain of mind, but for the fine performance he had put up as an actor.

(From “The Good at their Best” Selected writings of E.C.B.Wijeyesinghe, Actor and Journalist)