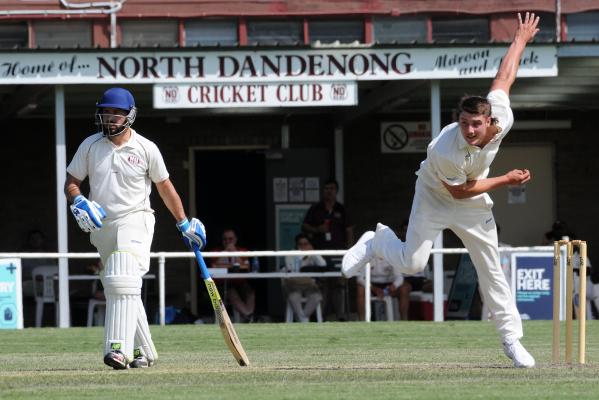 Buckley Ridges champion Daniel ‘DJ’ Watson sent a reminder of his sheer power and class with a dominant century against HSD to guide the Bucks to a barnstorming win on Saturday.

DJ – who has produced many performances of his glittering career at Park Oval that have turned heads and sent others ducking for cover – belted an unbeaten 138 from 124 balls against the Cobras in his first Turf 1 century since 2017/18.

After being sent in to bat, Watson and new recruit Ian Cockbain (14) – the Gloucestershire batsman making his debut for the club – were fluent early on notching up 33 for the first wicket before the home side broke through to remove the dangerous top-order star.

Despite falling to 3/97, Watson blew the home side away with a whirlwind century on a big ground, combining power with clever shot placement to combine for a flattening 136-run stand with Michael Davies (56) and give the Bucks an imposing 4/252 from its 45 overs.

It was tough going from the outset in the run chase, with Chanaka Welegedara snaring an early scalp, but unluckily for the new Bucks coach, he injured his hamstring in his fourth over in a big blow for the premiership fancies.

Despite the injury to its gun bowler, the home side fell for 92, with Ryan Patterson (30) showing some fight but ultimately were overpowered by Davies (1/5), Hussain Ali (2/35), Matt Goodwright (3/18), Wes Nicholas (1/13) and Rajitha Jayathunga (1/13), who all worked well together to bank the six points.

Down at Carroll Reserve, yet another dominant performance from all-rounder Ruwantha Kellepotha would ensure that Berwick would remain undefeated.

The Bears – taking on St Mary’s – were certainly tested, but ultimately had enough depth within its ranks to stave off a sharp challenge from the Saints.

Batting first, the Bears found itself in some early trouble, with the home side bowling strongly to leave the reigning premiers 6/72, including the vital wicket of superstar skipper Matt Chasemore.

Needing a late surge, Kellepotha provided a major boost, crunching 35 from 38 balls including two sixes, with strong contributions at the end of the innings from Nick Shirt (27), Jarrod Armitage (19) and Jarrod Goodes (24) ensuring that the visitors would reach 181.

In a strong bowling performance, Kusan Niranjana (4/52) was impressive, while Ashan Anthony’s (3/24) wickets were important.

With gun quick James Wilcock out, Jarrod Armitage (3/45) provided the early spark with a cracking opening spell that left the home side 2/13.

But fight from Niranjana (36) and Junaid Kari (38) saw the home side build into its innings and potentially challenge for a huge scalp.

The wickets of the top-order pair, snared by Nick Shirt (2/21), who built on his vital effort with the bat, saw the Saints stumble, but keep themselves in the contest.

As he does so brilliantly in the opening rounds of the Turf 1 season, spinner Kellepotha (4/34) completely changed the momentum of the clash, snuffing out a strong challenge and ripping through the middle and late orders to help guide his side to a 26-run win.

Springvale South racked up the runs in a high-scoring affair with North Dandenong, with a number of starring performances helping the Bloods to a victory.

With the bat, it was talented left-hander Ryan Quirk (92) that thrilled, slamming on five sixes to guide the Bloods to a formidable 5/269.

Quirk – who is starting to really build into his season – was at his classy best at the top of the order, combining in a number of strong partnerships.

But it took a remarkable 75 from just 37 balls from recruit Clint Tomlinson to help boost the total with a stunning late flurry of boundaries.

Highly-touted coming into the club, Tomlinson flayed five sixes from his 37 balls, showcasing exactly why he’s going to be a weapon for the powerhouses as the year goes on.

The Maroons put some strong resistance together, with opener Syed Mehmood (41) in particular looking to give the total a real shake, but were up against it as the Bloods made key breakthroughs to send the home side to 4/78.

Clay McCartney (37 off 21) ensured his side would go down fighting, but a stunning performance from left-arm tweaker Jarryd Straker (5/30) – his seventh five-wicket haul for the Bloods – proved the difference with the Maroons bowled out for 193.

Matt Wetering (2/29) also picked up a couple of wickets, while Ryan Quirk (2/38) backed up his batting effort with some handy scalps.

And Narre South picked up where it left off from last week, snaring a dominant win against Hallam Kalora Park at Frawley Road.

The Hawks were in dire trouble in the early stages, with a brilliant new-ball spell from Josh Dowling (4/50) leaving the home side at 4/16, and with some of its big guns including Jordan Hammond and Leigh Booth back in the sheds.

Despite a fine hand from Ben Hillard (53 not out) who crafted his second consecutive half-century and hasn’t been dismissed in four innings so far this season, the Hawks could only muster up 8/139, with champ Scott Phillips (2/35) also impressive again.

The Lions didn’t have it their own way, with Will Whyte (2/33) looming large early to snare two wickets, but Kyle Hardy (48 not out), and Scott Phillips (57 not out) cruised home in dominant fashion with seven wickets still left in the shed.

The great Phillips is beginning to really motor along and build into some ominous form, and now has 136 runs at 68 and six wickets at 17.2 next to his name with one round to play prior to Christmas.

It looms as a really crucial round of cricket on Saturday, with momentum on the line heading into Christmas, and North Dandenong takes on Berwick, Hallam Kalora Park will be aiming for a swift bounce back against HSD, Buckley Ridges and Springvale South face off in a blockbuster, while Narre South will be looking for three on the trot against St Mary’s.