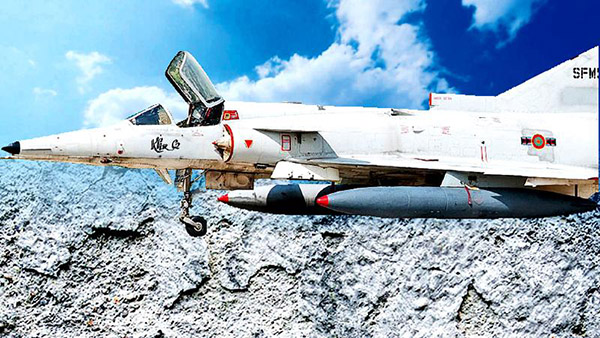 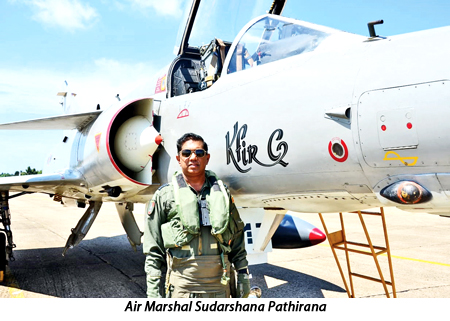 Robin Olds once declared that “I think it is love of that blue vault of sky that becomes your playground if, and only if, you are a fighter pilot”. The splendid island of Sri Lanka’s blue sky is the well-guarded playground of one of the most distinguished, illustrated and celebrated pilots of the Sri Lanka Air Force. He is none other than Air Marshal Sudarshana Pathirana, the 18th commander of the Air Force.

Born as the eldest of a family of two siblings; a sister and a brother in the cool climes in the hill capital of Kandy, Air Marshal Pathirana reminisces his cherished and treasured memories, surrounded by his devoted and loving parents over his long felt desire to join the forces, despite that he was even eligible to enter the medical faculty.

Being a young man with a knack and a lust for adventures, engulfed with a strong sense of patriotism, Air Marshal Pathirana was adamant not to revoke his decision of getting himself recruited with the Air Force as an officer cadet which was assisted and blessed by his late father, a lecturer by profession, albeit initially, his teacher mother slightly disliked, owing to the security concerns at that time in Sri Lanka. A product of Dharmaraja College, Kandy, Air Marshal Pathirana’s journey in the Air Force, initiated as a young pilot, got strengthened over the years with his vast experience, the wealth of knowledge and an abundance of rigorous training, acquired locally and internationally and has paved the way for him to rise up to the top of the ladder of his selected field, while eventually becoming its versatile and acclaimed commander.

Air Marshal Pathirana becomes an exception being the first and the only pilot in the history of the Air Force, who had the adventurous and rare chance of flying a jet 66,000 feet above the sea level and of which his recollection is full of pride, joy and excitement. Air Marshal Pathirana said, “Having understood my potential and capacity, my Chinese instructor based on the ground, suggested me to fly above 63,000 feet which I did and eventually I ended up at 66,000 feet with such a lot of confidence. It was also a part of the training package too. Those aircraft were new. We wanted to test the aircraft’s capability as well”.

He said it was quite exciting to see the beautiful picture of the entire island from above, albeit it involved just a little bit of anxiety as well. It was not merely through the distance that he moved but through the fulfillment of satisfaction entailed with smart professionalism, which came from hauling himself up into the air with absolute control, from realising himself as well as that of his airplane to the letter.

In recognition of his gallantry and service, courage and professionalism, Air Marshal Pathirana has been conferred with two “Weera Wickrama Vibhushanaya”, two “Rana Wickrama”, four “Rana Sura” and nearly a dozen of medals. He is the recipient of the highest number of heroic medals in the Air Force.

On January 5, 2021, the Air Force celebrated the 25th anniversary of its No. 10 Kfir squadron of which Air Marshal Pathirana was one of the pioneering pilots among five other flyers. He has contributed immensely to secure the unity of the motherland while being an active participant in air operations during his tenure as a former commanding officer of the No. 10 Kfir squadron. 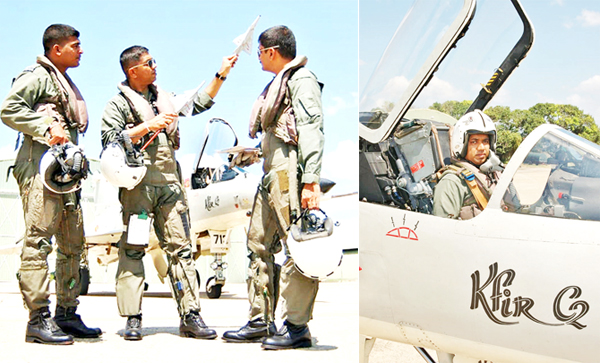 During the humanitarian operation, No. 10 Kfir squadron was one of the most sought after squadrons in the Air Force whose remarkable contribution has paved the way for the task of rescuing the island from the grip of terrorism.

The squadron is well known for its accurate and overwhelming firepower with which it destroyed and negated the crucial hard points as well as that of the artillery positions of the terrorists and thus has minimised the number of fatalities of the advancing troopers.

The No. 10 Kfir squadron is blessed with well trained, meticulous, able and capable pilots, whereas the squadron is ever praised for the air strikes, directed by the Kfirs at the most crucial points of the terrorists. As Jim Bailey declared the pilots of the No. 10 Kfir squadron possess the qualities of any successful fighter pilot whose qualities are shaped up by observation, determination, initiative and courage with a strong degree of humanity.

Pathirana said that his pilots receive international cross training. They are sent for air shows and operations as participants and observers. He said that the Air Force closely works with the Army and Navy; the sister services.