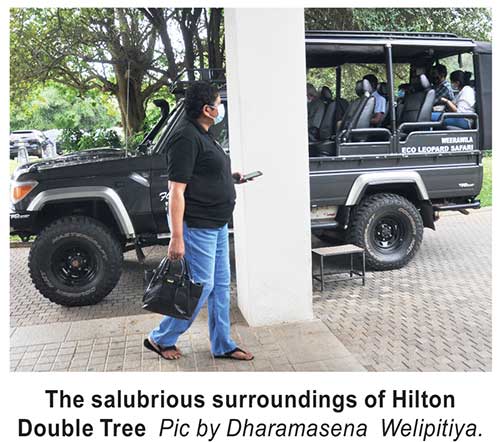 The Hilton Double Tree, at Weerawila, a Rajawarna Resort, was a stunning revelation to a traveler. Not was, but is, one of incredible natural beauty.

That too, after the hustle and bustle of the city, you travel on the Galle highway, on to Hambantota, and about an hour later, travelling on asphalt smoothness you arrive at the Hilton Double Tree. If one could call it that, it was a revelation of a well placed hotel, that an international brand like the Hilton would manage a guest holding quite as luxurious as the Double Tree.

Although opening of the hotel was as recent as November 2020, we noted the hotel guest list was such that the hotel was at least 90 percent occupied. A big plus for the reputation of the Hilton, more so, its fame for good visitor attention was an added incentive that local tourism was a dynamic message that covid 19, although a serious restrictive influence, alternatives were in place to also encourage internal travel.

Chris Zappia, said the Weerawila, Double Tree Hilton, was the first of 607 Double Tree hotels to function in the face of restrictive influence of the covid pandemic. With the Mattala Air Port attaining functionality and expected passenger traffic would increase, the Hotel would be a viable option to both foreign and local tourists. His enthusiastic remarks on the natural beauty of Sri Lanka, including wild life, eco tourism, he said the island had so much to offer that could lure tourists. He agreed the Maldives was better known in the US, attributed to better publicity, than Sri Lanka. He also agreed Sri Lanka had more to offer, and would not be long before the tourist trade would increase.

General Manager Krishanta Damunupola said the Hilton Double Tree is in trend with greenness and an environment of tranquility which is in line with what the hotel offers. The 95 room and its wide space stretched out to a full kilometer in length, which was a concept for peace with salutary amenities that ensured visitor comfort and more in relationship with nature.

We experienced the nature trip to Bundala, a short drive from the hotel; which proved the essence of the relationship with nature was an on-going experience. Bird life, mainly, was an irresistible trip, and more so the guide, who was also the driver of the modified 4 wheel drive, was well versed with the sights and the profusion of bird life.

Although we did not see them, elephant presence was also noticed.

Manager Damunupola said the future of the travel industry was good. Particularly that the Double Tree and its nature concept is in line with the international ‘green lobby’, was an appealing concept for tourism. The Hilton Brand, usually in line with urban stays, completely turned round with the Double Tree concept. Particularly its surrounding atmosphere of salubrious surroundings.