Sarachchandra Open Air Theatre is located at the center of *University of Peradeniya. It is named in memory of *Professor Ediriweera Sarachchandra. Built according to the architectural style of ancient Greek Theatres, it is a spectacular theatre and is popularly known as “Wala” (meaning pit in Sinhala due to its shape) among undergraduates at the University and drama enthusiasts.

According to drama enthusiasts, the Theatre is also called “watching place” as spectators sit on the stone steps created on a slope.

Built in 1950s, the space where the theatrical performances take place is semi-circular with stone steps for spectators. A large number of spectators can be accommodated in this space. This is the venue for the majority of dramas which take place at the University. Acoustics have played a vital role in the construction of this theatre as spectators seated in the extreme far rows can also hear the sounds (songs sung by dramatists, sound of drums and musical instruments as well as dialogues of the cast) of dramas or plays clearly. The beautiful landscape of the Theatre with trees is mesmerizing. The shades of the trees and the cool breeze make the venue enchanting. The Theatre adds glamour to the University and the landscape, a fine example of how a well-designed as well as aesthetically pleasing structure blends well with the surroundings.

The venue of the Theatre becomes more enchanting in May and June (every year) with blooming flowers as the Pink Trumpet Tree (Tabebuia rosea) spreads a carpet of light pink flowers on the terraces during the blooming season. At times, the steps are completely covered beautifully similar to a carpet with flower petals, a spectacular scene.

Professor Sarachchandra had a vast knowledge as well as experience in oriental and occidental theatre traditions and was of the view that *Maname could not be staged on a proscenium stage as such type of stage was more suitable for staging naturalistic plays. Instead, a ranga madala (circular stage) was more suitable. While serving as a lecturer at the University of Peradeniya, he was on the lookout for a suitable place to stage Maname.

According to Professor Sarachchandra’s memoir ‘Pin Ethi Sarasavi Waramak Denne’ published in 1985, there is a great story about the construction of the Theatre. 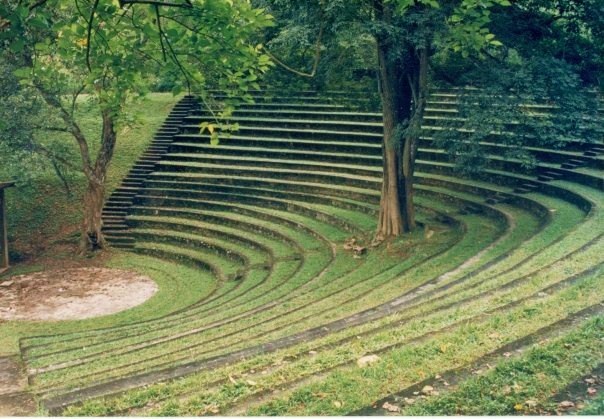 According to his memoir,

“Those days I was residing in one of the three bungalows on Sanghamitta Hill. While descending the hill and walking towards the Arts Block, I noticed a piece of land concave in shape, like a part of a broken clay pot. This was a terraced paddy field which had been abandoned and was overgrown with weeds. At the bottom of the land was a flat space. Although I had been passing that place daily it was only after I started thinking of an open-air theatre that it struck me as a suitable location for what is known as an Amphitheatre – an auditorium with a stage. The space at the bottom could be used as a stage and the audience could sit in the terraces” (p. 209).

Although, Professor Sarachchandra was of the view that the land was suitable for an Open Air Theatre, he decided to further look into the possibility of such a construction.

“It was essential,” he adds. “To find out what the acoustics of this place was like for theatre performance. One evening I went there with a group of students. I think Gunasena Galappaththi was one of them. I placed several of them in various places in the pit and made them talk and sing. Then I realized that it was a place with natural amplification of sound. The Epidorus Amphitheatre in Greece came to my mind. If you stand anywhere and strike a match you will be able to hear it”. (p. 210).

“I had no power to give orders to the Works Department or to the Administrative Section. That could be done only by the Vice Chancellor or the Registrar. The expenses involved in constructing even an amphitheatre at the site I mentioned would be minimal. What had to be done was cutting and removing the weeds on the terraces, constructing in cement a circular stage at the bottom and putting up a *cadjan shed behind it.” (Pages 210-211).

As the location was an abandoned paddy-field, during early days the terrace with seating facilities was leveled with trimmed grass. Later, the terrace was constructed in granite.

Declared open in early 1958, the first drama staged in the Theatre was Professor Sarachchandra’s ground-breaking Sinhala play *Maname. His popular drama Sinhabahu* was also performed at this theatre in 1961.

At present too, the majority of dramas shown at the University are staged at this theatre.

Location: University of Peradeniya, about one kilometer from *Galaha junction and about 8.5 kilometers from Kandy City