Out of Africa in our wilds

Continuing our series on the Bawa award shortlist, we feature a five star safari camp in Yala 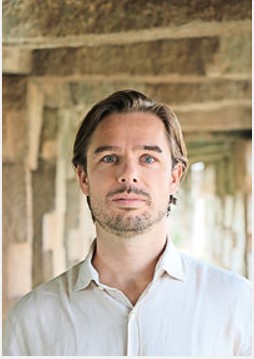 Palatupana used to be one of the ‘climaxes’ of Yala. After the long safari drive through dry jungle, the landscape broke into haunting sand dunes and a wild boulder-strewn beach where you got down at dimming dusk for a ‘stretch’ and to read the sands for the roll-call of creatures from leopard and elephant to pangolin.

Cradled near the national park in the same beach today like a mixed herd of elephant and heron from the sky is the Wild Coast tented lodge – the first of its kind in Sri Lanka. The elegant menagerie of structures forms a five star safari camp in the wild Ruhunu country.

When Olav Bruin and his team from Nomadic Resorts, Netherlands who designed Wild Coast for Resplendent Ceylon saw the site, they knew that inspiration here would come as thick as the monsoon waves.

Nomadic Resorts is no novice when it comes to buildings that hug nature. They have built in Botswana and Brazil; the Himalayas and the Skeleton Coast in Namibia and soon the team was busy at the preliminary stage which involved gathering what Olav calls the genius loci of the milieu.

They were impressed by the great rock outcrops and their ‘micro versions’- the termite mounds and clinging Bambara hives. These gave them insight into what makes the place ‘biologically special’. But they also had to look into “the historical land use, indigenous culture, vernacular architecture and traditional building materials – to understand the dynamic between man and nature.” They had to take into account the wildlife whose stamping ground it had been for millennia, weather conditions and the cultural heritage of the area.

Today Wild Coast has 36 tents or ‘Loopers’- shepherded between the main facilities which are positioned at either side of the site. The land-bound side has the welcome area while the beachfront has the restaurant, bar, pool and library- all these referred to as the main structures.

“Being a foreigner,” says Olav, “it felt as a big responsibility to design something in such a sensitive location- with the architectural heritage of Geoffrey Bawa in mind.” But it was masterfully accomplished, after what seems an avid ‘baptismal’ in vernacular culture and architecture with the designing alone spanning a year.

Themes preponderant with Bawa crop up, like “the positioning of the buildings in the landscape, the sequence of spaces, the relations between inside and outside, the incorporation of natural elements such as rocks, learning from vernacular architecture and the use of traditional materials.”

The main structures resembling edifices from the African outback have been inspired by the great rock boulders with beehives studding them, common features of the dry zone jungles. These boulder pavilions are clustered organically together. Though they look solid from outside, they are really light and open, tautly woven from bamboo and clad with reclaimed teak shingles.

Across the top of these domes run ventilation slits which have LED strips that light up the night. The teak shingles as they weather will age with grace, acquiring a patina matching the rocks on the beach. 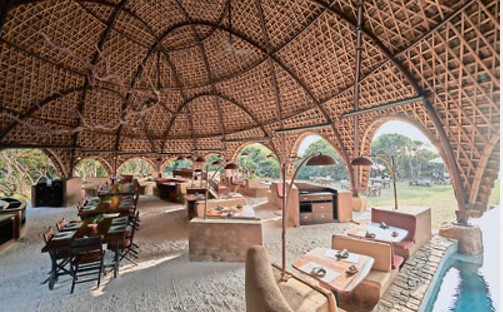 The restaurant: Dining under an eco-friendly dome

Apart from its ecological chandelier which would have looked graceful in a cathedral, the welcome area has two specialties: the sparkling quartz wall behind the check-in desk which is like looking into a jammy geode and the washrooms in smooth black terrazzo with white bands running. Shiny copper taps and bathroom accessories contrast against the black.

Situated at the other end of the camp, the pool separates the restaurant from the bar. The latter is called Ten Tuskers, dedicated to 10 legendary Yala pachyderms whose portraits loom in evidence. The bar counter itself scintillates with a quartz wall and bamboo chandelier with a bottle rack made of copper pipe.

The pool offers a 40 metre swim from the building towards the beachfront. The water reflects the dancing sunlight onto the bamboo ceilings in daytime; night sees the integrated fibre optics making the pool twinkle like the starry sky. There are seating niches carved into the sides of the pool, and campaign furniture is littered around, like part of an opulent African expedition of a bygone age.

The restaurant which is the largest pavilion has coated mud brick niches for seating and service stations. Few seats do not look out to the sea which laps and susurrates between the openings amidst beach foliage. Copper lamps hang above the tables like miniature street lamps.

The central table is made of a 150-year-old kumbuk tree which used to stand sentinel at Resplendent Ceylon’s Cape Weligama resort before it died. Suspended from the vaulted ceiling is a seven-metre-long illuminated tree found on the site covered entirely in copper leaf.

Next to the bar is the library where a naturalist could be lost for hours. Inside, a central timber display case is surrounded by shelves filled with books, fossils, minerals, shells, globes, scientific equipment, dried plant samples and animals in specimen jars. Also vaulted, it is a cosy escape chute.

The guest tents are actually cocoon-like membrane structures called ‘Loopers’ (invented solely by Nomadic Resorts). Clusters of five Loopers are grouped like a leopard’s pawprint overlooking one waterhole designed to attract wildlife. Guests get to admire the wildlife from the safety of elevated decks at the front of their tents. 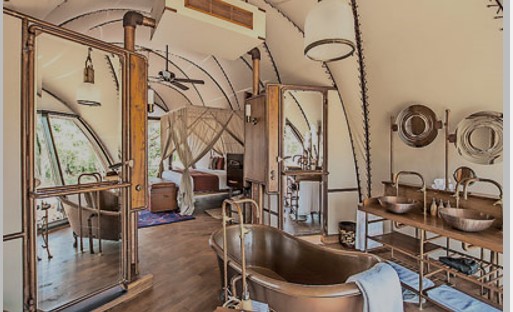 Luxury ‘Loopers’ : The interior of a guest tent complete with a brass bathtub

When the waterholes were being dug, they discovered a subsoil composed mostly of clay and laterite gravel commonly used for road and path surfacing of a kind that is excavated from river beds, with detrimental environmental effects. So the waterholes were sized based on the material required for surfacing the pathways. To utilise the excavated material, a special rotating sieve was constructed to separate the gravel from the clay, which in turn, was used to create mud-brick interior features.

In many other respects too the camp is a model of sustainability. Rock excavated from the main pool was used to edge the pathways. Dotted through the camp are a series of elegant rock balance sculptures by Adrian Gray created specifically using rocks found on the site. The existing vegetation is complemented by an attractive xeriscape of spiky plants such as Agave, Fucrea and Sanseveria that are able to withstand long drought periods and contrast with the curvilinear forms of the buildings. An additional advantage is that they are unappetizing to the wildlife that roams freely through the site.

The waterholes are fed by the grey (waste) water from the tents where the guests use only natural biodegradable soaps. This water is organically filtered through reed beds before reaching the pond.

As an eco-resort, one major ambition was to minimize environmental impact. Solar panels on the roofs of the back-of-house spaces produce up to 40% of the camp’s energy needs. Food waste is processed in a gas digester producing biogas for the kitchen and grey water is recycled for watering the gardens. Heat recovery from the air-conditioning units is used for water heating in the Loopers.

The local community was drawn into the design. Local fishermen were trained by a group of international consultants to execute the bamboo and tent construction. The boulder footing details of the main pavilions were constructed by a local rock carver who specialises in working with temples, and the interior liners of the Loopers were skilfully laced by fishermen with nimble fingers accustomed to fixing nets.

The interior design was handled by Bo Reudler Studio, Netherlands.

By the beach and in the jungle:The main resort structures inspired by boulders and beehives