Environmental destruction under political patronage is not new in Sri Lanka. Although the bio-diverse wetland in Bellanwila-Attidiya is beyond measure, and officially protected since 1990 as a bird sanctuary, it appears that its protected status is no longer sufficient. Violating conditions and guidelines imposed by the Wild Life Conservation Department (WLCD), a private party backed by a powerful political hand has cleared and filled a part of land belonging to the Attidiya sanctuary.

The revelations were unearthed in an investigation by Daily Mirror Eye, followin g complaints from environmentalists who did not want to be named in fear of ongoing political intimidation. Political power coming from government higher-ups have so far been more effective than the orders and recommendations that have been issued to prevent this unauthorized clearing and filling.

Who, When and Where 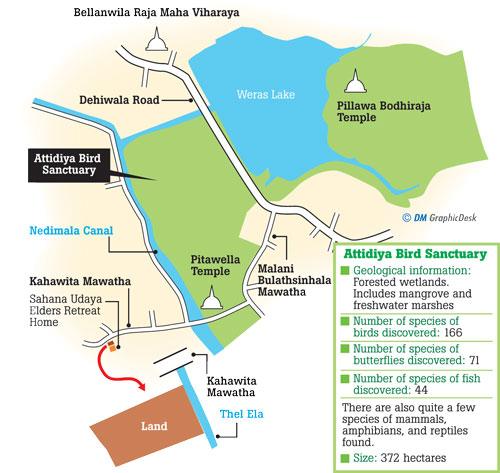 This particular block of land in extent of 0.7 hectares is bounded on the East by a reservation abutting a canal named Thel Ela located in the Attidiya bird sanctuary. The most important fact is that this land is adjacent to another land at No.28, D.S. Kahawita Mawatha in Attidiya — owned by a proprietor the late D.S. Kahawita, who lived at the same address – it was later transferred to Sri Lanka Public Trustee.

The Public Trustee’s Department had then transferred this land to the “Sahanoda Foundation” to construct a home for elders where the Sahana Udaya Elders Retreat Home is now located.

Sahanoda Foundation is a charitable organization formed in 1992 by well-known businessman Bandula Weerawardana and Ven. Haputale Pannarama Thera. Another startling revelation is that businessman Weerawardana whose name has been linked to several powerful politicians had in 2017 been arrested and remanded for a multi-million international financial fraud connected to the Far Eastern International Bank in Taiwan.

Leaving that aspect aside, the parties led by Pannarama Thera had plans to build a ‘training college’ in the questionable land next to the elders home. Based on their request, The Wildlife Conservation Department (WLCD) has given them the green light to go ahead with the construction based on the fact that the land is a private land despite it being located within the boundary of the sanctuary.

How WLCD conditions have been violated 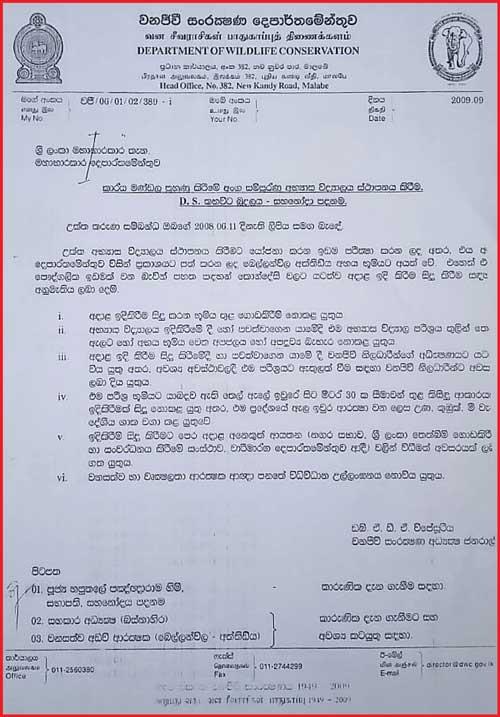 Most of the six conditions have been violated and the current situation has posed a threat to the sanctuary which is rich in marshy lands and water bodies with a large number of terrestrial and aquatic habitats.

The green light, given by the then WLCD Director General W.A.D.A. Wijesooriya in a letter dated September 2009 has specifically mentioned six conditions.

Most of the six conditions have been violated and the current situation has posed a threat to the sanctuary which is rich in marshy lands and water bodies with a large number of terrestrial and aquatic habitats.

The third condition specifies that the construction process needs to be carried out under the supervision of WLCD officers and the officers need to be allowed to enter the premises whenever it is necessary.

During the Daily Mirror Eye investigation, it was revealed that Wildlife range officers have not been allowed into the land when they requested permission to observe the clearing and filling activities which ultimately resulted in the constructors violating the fifth condition as well.

The fifth condition categorically states that no constructional activity is allowed within a 30-meter gap from the Thel Ela canal reservation and that a 30-meter area has to be protected by planting trees such as bamboo, kumbuk and mee. However, the current situation is such that there is not even a 3-meter gap between the canal reservation and a wire fence which has been installed, illegally demarcating the land for construction purposes.

Why WLCD is under political pressure

It is disappointing to learn that the Wildlife Conservation Department (WLCD) has undergone much public criticism over the political interference and pressure which their officials have gone through over time when fulfilling their duties towards protecting flora and fauna in Sri Lanka.

Attempts to get the unauthorized filling of this land stopped have fallen on deaf ears, because a political family which is currently in power is backing those responsible for the violation. The political hand is so powerful that they even managed to prevent a major television channel from reporting on this issue.

It is also learned that the WLCD is currently under more pressure to issue another letter, permitting the parties to go ahead with the construction and unauthorized land filling. If that happens, it will be similar to a government department responsible for maintaining nature reserves and wildlife habitats in the country granting official approval to cause environmental destruction.

Last month, another environmentalist had filed a complaint (Ref. No:4814) with the WLCD against the illegal filling of the Thel Ela reservation. So far, there has been no meaningful action taken by the WLCD with regard to the complaint or the case.

The current Director General is not even aware of any complaint or any problematic situation with regard to this Kahawita land. When the Daily Mirror inquired from DG Chandana Sooriyanbandara, he said; “usually such issues reach my office only if regional wildlife officers cannot handle them. So far I am not aware of any such issues”.

How serious is the damage to the sanctuary 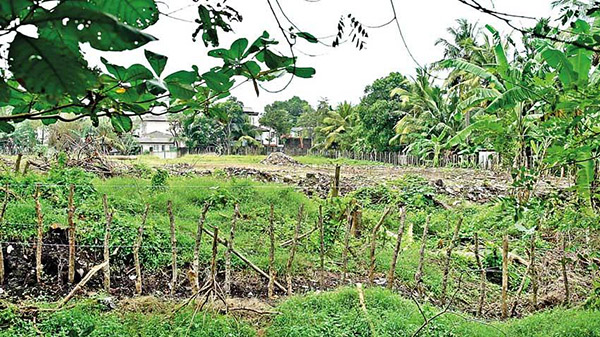 Violating the 30-meter condition, there is not even a 3-meter gap left between the canal reservation and an illegally put up wire fence demarcating the land for the construction purposes.

Unless this illegal act is prevented immediately, it could pose several environmental issues in the days to come

Although some people are aware of this unauthorized act, no one is objecting as a powerful political family is backing the monk

Attidiya Sanctuary is home to several species of aquatic birds, many varieties of endemic fish and a host of amphibious creatures ranging from frogs to crocodiles. An environmentalist on the basis of anonymity told Daily Mirror that though the filling of this particular land is currently on hold, damage has already been done by those who filled the land.

“Unless this illegal act is prevented immediately, it could pose several environmental issues in the days to come. Although some people are aware of this unauthorized act, no one is objecting because the powerful political family is backing the monk. Needless to say that most of the environmental problems are caused by the ineffectiveness in the supervision by the government itself,” he said.

As specified in the Ramsar Convention, wetlands are among the most diverse and productive ecosystems which provide essential services and supply all our fresh water. The convention was negotiated in the 1960s by countries and non-governmental organizations concerned about the increasing loss and degradation of wetland habitat.