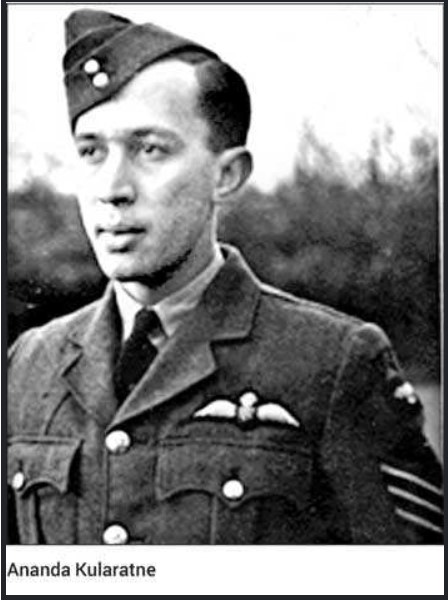 Ananda Kularatne was the eldest son of P de S Kularatne, Principal of Ananda College and Dharmaraja, the well-known educationist whose history is well-documented. His mother was Hilda Westbrook, an English lady, a Cambridge graduate in French and German from Newnham College, a theosophist and educationist. She was founder Principal of Ananda Balika in Colombo, Sri Sumangala Girls School, Panadura, Mahamaya College, Kandy, Maliyadeva Girls School, Kurunegela and Sri Pushpadana Girls School, Kandy as well as being Principal of Visakha Vidyalaya during most of 1920.

Ananda arrived in England in November 1941 after volunteering for RAF service. He was just 20 years old at the time of his enlistment in the RAF and had just started his second year of a general arts degree at Colombo University College and had learned to fly at Ratmalana Airport.

In the RAF, Kularatne did his initial training course at Stratford-on-Avon in early 1942. He was awarded his pilots wings in February 1942 and then posted to 102 (Ceylon) Squadron, on active service, based at Pocklington in North Yorkshire. 102 Squadron was named the Ceylon squadron because revenue from Sri Lanka paid for the planes!

From July 1943 until February 1944 Kularatne and his crew of six carried out 25 raids over Germany, Italy and occupied Europe including the maximum effort raids on Hamburg, Peenemunde and Berlin. He was counting the missions up to the figure of 30 which meant the end of the tour of duty. The survival rate was very low and 55,000 Bomber Command aircrew lost their lives during the war. Losses were so great that crews often did not mix as they were never sure who would be missing at breakfast the morning after a raid. Bomber crews led a double life of living in the quiet English countryside during the day and entering a blacked-out Europe at night in the battle for survival against the flak and night fighters. By early 1944 Kularatne and his crew were amongst the longer surviving crews in the squadron.

On the night of 15 February 1944 RAF Bomber Command launched the largest bomber force sent to Berlin with a total of 891 aircraft dispatched. The Halifax bomber, Ananda was flying, took off at 5:27 p.m. and the squadron record books states: “Aircraft missing, no news after take-off”. The aircraft was shot down over the Baltic on the approach to the German capital. No trace of the aircraft has been found. However, the body of the Australian Air Gunner Alf Stapleton was found on the beach and buried in Rostock near the north German Coast. He now rests in the RAF cemetery in Berlin.

Kularatne and the rest of the crew are remembered on the Air Forces Memorial at Runnymede for those aircrew lost with no known grave. The aircraft was almost certainly shot down by a night fighter with upward firing guns which crept underneath its target and fired unseen into the wing fuel tanks. 43 aircraft were lost that night and a total of 265 men were killed, 54 prisoners of war and five evaded capture.

Kularatne married an English woman in 1943 and his son, Simon Ananda Kularatne was born after his demise. Simon Kularatne went on to become a Chartered Surveyor. He was also the Secretary of the 102 (Ceylon) Squadron Association until his death in Blackpool in 2016.

(Note by the compiler: Aforesaid tribute was compiled based on information shared by Dr. Jane Russell and Ananda Samaraweera and from information available at http://wikibin.org/articles/ananda-kularatne.html. I hope to compile similar tributes for other Sri Lankans who volunteered for RAF service during WWII subject to receipt of sufficient information especially in response to the said paper article.)