It was a round of stunning fightbacks and brilliant individual performances in the DDCA’s Turf 1 competition on Saturday, with no other than a thrilling blockbuster at Park Oval between Buckley Ridges and Berwick capturing the attention.

The Bears looked down and out and the Bucks a class above, but never doubt a champion side – Matt Chasemore’s premiership winning group simply keeps getting the job done.

The Bears managed to bowl the home side out for 192, with overseas recruit Benny Howell – fresh off a stint with the Melbourne Renegades in the BBL – fighting hard for his 37 while Daniel Watson continued his strong form with 34 at the top of the order and Hussain Ali (38) blasted some vital runs late in the piece.

But it was a disastrous start to the chase, with Jordan Cleland out first ball and the visitors slumping to 4/12 and Chasemore back in the sheds after a stunning early spell from Michael Davies (4/41) and strong support from Howell (2/55).

While the Bears managed to claw its way back through Ruwantha Kellepotha and emerging star Jaxon Binns (36), who was showing great poise and terrific strokeplay, the Bucks made further inroads on the way to what seemed a likely victory, with the visitors falling further to 6/93 after the crucial scalp of Nathan Pilon.

It was particularly impressive display from the teenager, who came in at 4/12 and immediately placed the pressure back on to the home side’s bowlers.

But slowly, and surely, with the run rate never really an issue, Kellepotha began turning the tide with his class and power.

Combining with Jarrod Armitage (27) for a 58-run stand, the Bears found life, with Kellepotha finding the boundaries at a steady pace despite the Bucks pushing hard for the remaining wickets.

James Wilcock (29 not out) then played a vital cameo, helping guide the Bears home to victory by three wickets with Kellepotha still going strongly in what is sure to be the first of many blockbuster between the two powerhouses this season. 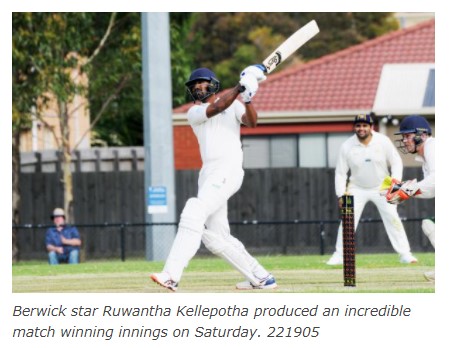 Kellepotha finished with an unbeaten 82 from 74 balls, slapping eight fours and four sixes after coming in at 3/8 in one of the most brilliant individual displays of the season.

His season has been particularly outstanding – with 19 wickets at 9.6 and 156 runs at 78, he is by far the outright favourite for the coveted Wookey Medal.

It was also a classy display from a DDCA star down at Strathaird Reserve, with reigning Turf 1 Wookey winner Morteza Ali saving Narre South from what appeared to be a likely loss against North Dandenong.

It’s been a somewhat quiet start to the season for the gun all-rounder, but he found form exactly when his team needed it, snaring 5/44 from his 12 overs as the Maroons posted 157 from 39 overs.

Gun seamer Josh Dowling also jagged 4/37 as he continues to build into some ominous form for the Lions.

Similar to down at Park Oval, it was a horror start to the chase for the Lions, with the home side losing a wicket first ball and slumping to 2/1, and eventually 5/35 as new ball pair Matin Sultani (3/38) and Nimesh Kariyawasam (2/27) bowled brilliantly.

But Ali, who opened the batting and was a bystander as the wickets tumbled, simply couldn’t just roll over, showcasing class, experience and dare to turn the game on its head.

The all-rounder blasted an unbeaten 77 from 109 balls to then completely take the game away from the Maroons, combining in a brilliant stand with Jawed Hussaini (34) as the Lions didn’t lose another wicket as it ran down the total. 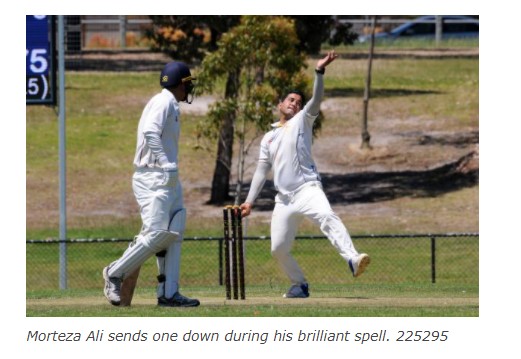 Hallam Kalora Park has surged to second on the Turf 1 table after a statement win against Springvale South at Alex Nelson Reserve.

The Hawks have been bubbling along nicely this season, and started 2021 with a bang in a major scalp of the Bloods.

It was tough going for the home side, who despite a classy 56 from star recruit Clint Tomlinson could only muster up 7/164, with seamers Jordan Hammond (2/26) and Will Whyte (2/22) the multiple wicket takers.

While the Bloods did manage to make significant in-roads, largely through left arm tweaker Jarryd Straker (3/52), star opener Leigh Booth crunched 93 from 131 balls as the visitors raced away with a five wicket win with two overs to spare.

The incredibly consistent Booth crunched 10 fours and three sixes in his gem of a knock, while Matt Cox’s 24 was incredibly important in the context of the game.

And Heinz Southern Districts banked its first win of the Turf 1 season, staving off St Mary’s at Reedy Reserve.

It’s largely been a tough campaign so far for the Cobras, but the home side dug deep and in the process clawed off the bottom of the table and into sixth position.

After being sent in to bat, the home side – off the back of exciting opener Udara Hettige (60) – managed to post 173 from its 45 overs.

Saints pair Deeshan Vimukthi (4/26) and Kusan Niranjana (4/34) were an absolute handful with ball in hand.

Despite falling to 5/54 and with its key top order batsmen back in the sheds, the visitors fought hard to claw back into the contest, with Niranjana striking 27 and Novoda Hettiarachchi 27 to potentially push for an unlikely win.

But the Cobras rallied late to end the resistance, with Hettige (3/50), Chandima Abeykoon (3/18) and Amila Kangaraarachchi (3/30) all in fine form as the visitors fell over for 154.

It shapes as another fascinating round on Saturday, with fourth and fifth placed Buckley Ridges and Springvale South to battle it out, Springvale South will be looking to bounce back against St Mary’s, top-two placed Hallam Kalora and Berwick look set for a blockbuster, while North Dandenong and Heinz Southern Districts will be desperate for victories.