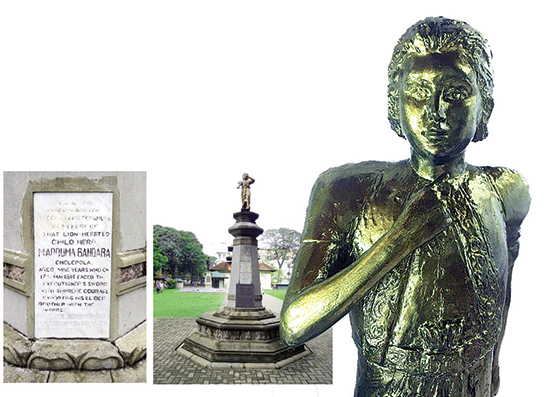 Madduma Bandara as a source of inspiration:

Inspired by my friend Captain Elmo Jayawardena’s story in The Island about the grave and headstone of late Ehelepola Adigaram in Mauritius, I thought of writing about the late Adigarm’s younger son, Sri Lanka’s child hero, Madduma Bandara, and how stories about him can be used to inspire the younger generation of Sri Lanka to be brave and patriotic.

Captain Elmo’s much-researched book, The Last Kingdom of Sinhalay”, won the State Literacy Award in 2005. I have read it several times to understand what went wrong with our nation.

When asked by a reporter on 27th October 2015, when he received the highest honour, “Sahitya Ratna”, at the State Literary Festival in 2015, he said, “I simply write for the love of it and it gives me a voice to reach the people”. Well said Sir! 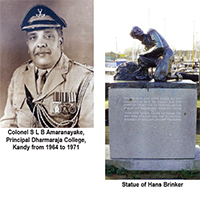 My story about Madduma Bandara starts with my good friend, fellow Navy Officer and now retired Commodore Nawan Tennakoon. Nawan and I played for the Navy rugby football team, commanded the same type of ships and craft and enjoyed our naval careers. In mid 1980s, the Navy had a rugby team, which sprang quite a few surprises in the ‘A Division’ rugby tournaments with a number of hard-fought wins. Our team was led by Commander H K Sisira, Sri Lanka Sevens captain and a proud product of Isipathana Collage, Colombo; he captained both the rugby and cricket at College. The rugby team consisted of brilliant players in the calibre of the late Commander Parakrama Samaraweera (towering figure and former Kingswood rugby captain), Lt NKD Nanayakkara (who was a product of Vidyartha College, Kandy, and later rose to rank of Rear Admiral), the late S/Lt Anjana Dissanayake (Trinity Lion), S/Lt Gamage (Royal College rugby coloursman, who later rose to rank of Rear Admiral), double International, brilliant place-kicker and full back, the late Petty Officer Bin Galif, Brilliant hooker and former Sri Lanka wrestling captain and the current coach of the Sri Lanka Wrestling team, Petty officer Piyaratne and martial arts expert, Sri Lanka pistol shooter, Master Chief Petty Officer Rodrigo and Sri Lanka prop forward  Chief Petty Officer U K Ranjith.

Nawan, a product of Nalanda was our vice captain and played at the pivotal position of scrum half.

This story was narrated by Nawan. His family, with nine children, is unique in that only his elder brother was born alone. All others are twins: Nuwan and his sister, two sisters, sister and brother and two brothers. His father was a top bureaucrat working in Matale.

One day, his sisters brought home a puppy, from the roadside. After a few days, the puppy suddenly died. Vet surgeons suspected puppy had rabies and recommended that all the children be given the rabies vaccine.

That was the time when one had to be administered with 21 anti-rabies injections around one’s navel. It was a nightmare, given the excruciating pain they caused. Nawan’s parents had a hard time, taking the children to hospital, daily, for injections. The third day, Nawan’s father took all of them to the Veera Keppitipola statue at the Matale town.

He narrated the story of Brave Keppetiploa Disawe and then told them about Madduma Bandara Ehelapola, who was the nephew of the great man.

Nawan’s father told them how Madduma Bandara, who was only nine years old, had walked up to the executioner, on 17th May 1814, and fearlessly asked the latter to sever his head with one strike of the sword while his elder brother was shivering. From that day, all Tennakoon siblings, inspired by Madduma Bandara’s bravery, bore the pain of the injections without crying.

My batchmate, Rear Admiral Dushyantha Amaranayake’s father was a great educationist in Kandy–– Colonel Senaviratne Loku Bandara Amaranayake, who became the Principal of Dharmaraja College, Kandy, in 1964. He, himself, an old Rajan, took over from Mr E W Perusinghe. Within seven years, he made Dharmaraja College, Kandy, one of the best schools in Sri Lanka. He retired in 1971. In mid-1960s, as a member of  Veera Madduma Bandara Commemoration Committee, he strongly recommended the construction of a statue of this great child hero of Sri Lanka. A well-known sculptor was selected for the task.

The sculptor is said to have asked, “What did Madduma Bandara look like?” Nobody could answer that question. Nothing resembling the child hero was available,

I have heard of another child hero, when I was a Grade One student at Royal College, Colombo, in 1968. Our class teacher, Mrs Samaraweera (who is 83 years old now) was a great story teller. She told us the story of Dutch child hero Hans Brinker, who used his hands to plug a leak in a dyke and saved his country. American author Mary Mapes Dodge, who first published her book in 1865, popularised the story of this little Dutch boy.

Wanting to know more about this story, I told my son, Ravi junior, to surf the Internet for more information. He informed me it was not a true story.

I learn something new from my son! Please check whether his conclusion is correct.