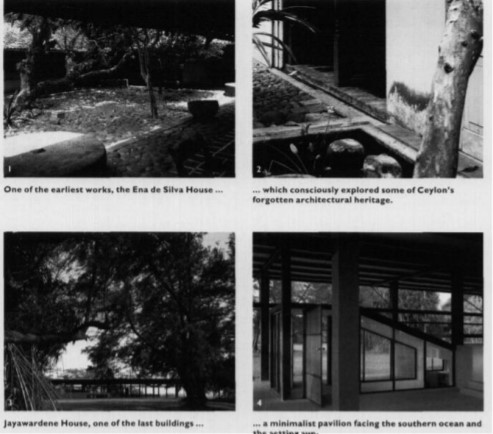 Sage of Sri Lanka: Geoffrey bawa has always been in the forefront of regional architecture in South Asia. Now, at the end of an inventive and insightful career, his achievements in rediscovering traditional Sri Lankan architecture and relating it to modernity have been recognized by the Aga Khan with the Chairman’s Award, only the third time it has ever been given.

Geoffrey Bawa is Sri Lanka’s most prolific and influential architect. His work has had tremendous impact upon architecture throughout Asia and is unanimously acclaimed by connoisseurs of architecture worldwide.

On only the third occasion since he founded the Aga Khan Award for Architecture in 1977, the Aga Khan will present the special Chairman’s Award during the 2001 Award cycle to Bawa to honour and celebrate his lifetime achievements.

Bawa was born in 1919 in what was then the British colony of Ceylon. His father was a wealthy and successful lawyer, of Muslim and English parentage, while his mother was of mixed German, Scottish and Sinhalese descent. In 1938 he went to Cambridge to read English, before studying law in London, where he was called to the Bar in 1944. After the Second World War he joined a Colombo law firm, but he soon tired of the legal profession and in 1946 set off on two years of travel that took him through the Far East, across the United States and finally to Europe. In Italy he toyed with the idea of settling down permanently and resolved to buy a villa overlooking Lake Garda. He was now 28 and had spent one-third of his life away from Ceylon. Not only had he become more and more European in outlook, but his ties to Ceylon were also weakening: both his parents were dead and he had disposed of the last of his Colombo property. 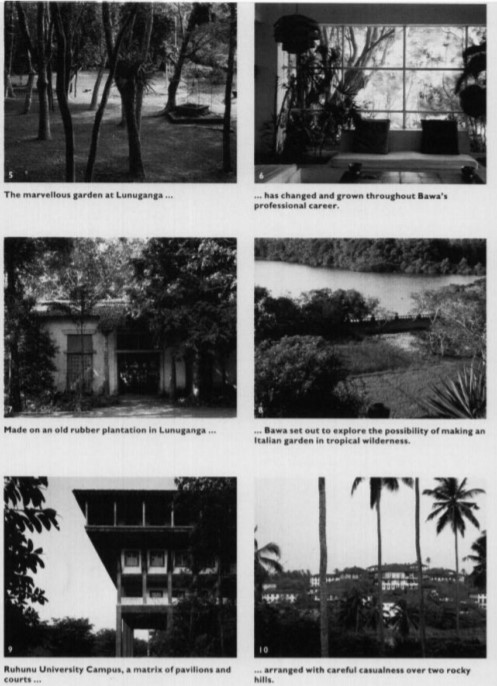 But the plan to buy an Italian villa came to nothing and in 1948 he returned to Ceylon where he bought an abandoned rubber estate at Lunuganga, on the south-west coast between Colombo and Galle. His dream was to create an Italian garden from a tropical wilderness, but he soon found that his ideas were compromised by lack of technical knowledge. In 1951 he was apprenticed to H. H. Reid, the sole surviving partner of the Colombo architectural practice Edwards, Reid and Begg. When Reid died suddenly a year later, Bawa returned to England and, after spending a year at Cambridge, enrolled as a student at the Architectural Association in London, where he is remembered as the tallest, oldest and most outspoken student of his generation. Bawa finally qualified as an architect in 1957 at the age of 38 and returned to Ceylon to take over what was left of Reid’s practice.

He gathered a group of talented young designers and artists who shared his growing interest in Ceylon’s forgotten architectural heritage, and his ambition to develop new ways of making and building. As well as his immediate office colleagues, this group included the batik artist Ena de Silva, the designer Barbara Sansoni and the artist Laki Senanayake, all of whose work figures prominently in his buildings. He was joined in 1959 by Ulrik Plesner, a young Danish architect who brought with him an appreciation of Scandinavian design and detailing, a sense of professionalism and a curiosity about Sri Lanka’s building traditions. The two formed a close friendship and a symbiotic working relationship that lasted until Plesner left the practice in 1967 to return to Europe and Bawa was joincd by the engineer K. Poologasundram, who remained his partner for the next 20 years. The practice established itself as the most respected and prolific in Sri Lanka, with a portfolio that included religious, social, cultural, educ ational, governmental, commercial and residential buildings, creating a canon of prototypes in each of these areas.

It also became the springboard for a new generation of young Sri Lankan architects. One of Bawa’s earliest domestic buildings, a courtyard house built in Colombo for Ena de Silva in 1961, was the first to fuse elements of traditional Sinhalese domestic architecture with modern concepts of open planning, demonstrating that an outdoor life is viable on a tight urban plot. The Bentota Beach Hotel of 1968 was Sri Lanka’s first purpose-built resort hotel, combining the conveniences required by demanding tourists with a sense of place and continuity that has rarely been matched. During the early 1970s a series of buildings for government departments developed ideas for the workplace in a tropical city, culminating in the State Mortgage Bank in Colombo, hailed at the time as one of the world’s first bio-climatic high-rises.

Bawa’s growing prestige was recognized in 1979, when he was invited by President Jayawardene to design Sri Lanka’s new Parliament at Kotte, 8km east of Colombo (AR May 1983). At Bawa’s suggestion, the swampy site was dredged to create an island at the centre of a vast artificial lake, with the Parliament building appearing as an asymmetric composition of copper roofs floating above a series of terraces rising out of the water. Abstract references to traditional Sri Lankan and South Indian architecture were incorporated within a Modernist framework to create a powerful image of democracy, cultural harmony, continuity and progress and a sense of gentle monumentality.

During the 1980s Bawa also designed the new Ruhunu University near Matara (AR November 1986), a project that enabled him to demonstrate his mastery of external space and the integration of buildings in a landscape. The result is a matrix of pavilions and courtyards, arranged with careful casualness and a strong sense of theatre across a pair of rocky hills overlooking the southern ocean. These projects brought Bawa international recognition. But the Parliament building and Ruhunu had left Bawa exhausted and at the end of the 1980s he withdrew from his partnership with Poologasundram and relinquished the name Edwards, Reid and Begg. He was now 70 and it was widely assumed that he would retire to Lunuganga and contemplate his garden.

But the break signalled a fresh round of creative activity and he began to work from his home in Bagatelle Road, Colombo, with a small group of young architects. Together they embarked on a stream of ambitious designs — hotels on Bali and Bintan, houses in Delhi and Ahmedabad, and a Cloud Centre for Singapore. None of these was built but each was treated as a test bed for new ideas. Some of these ideas came to fruition in three hotels built in Sri Lanka in the 1990s: the Kandalama, conceived as an austere jungle palace, snaking around a rocky outcrop on the edge of an ancient tank in the dry zone (AR December 1995); the Lighthouse at Galle, defying the southern oceans from its boulder-strewn headland; and the Blue Water, a cool pleasure pavilion set within a sedate coconut grove on the edge of Colombo. All three demonstrate Bawa’s concern to consult the genius of the place, as well as his skill at integrating architecture and landscape, and his scenographic manipulation of space.

A final house, designed for the Jayawardene family in 1997 as a weekend retreat on the cliffs of Mirissa, demonstrates Bawa’s unflagging inventiveness. A phalanx of slender columns supports a wafer-thin roof to create a minimalist pavilion facing the southern ocean and the setting sun. Nearly 40 years separate the Jayawardene House from the Ena de Silva House, but they are two points on a continuum, one a distillation of the other.

In 1998 Bawa was tragically struck down by a massive stroke that left him paralysed and unable to speak. A small group of colleagues, led by Channa Daswatte, have continued to work on the projects he initiated before his illness — an official residence for the President, a house in Bombay, a hotel in Panadura — with drawings being taken down the corridor from the office to Bawa’s bedroom for nods of approval or rejection.

Looking back over his career, two projects hold the key to an understanding of Bawa’s work: the garden at Lunuganga that he has continued to fashion for almost 50 years, and his own house in Colombo’s Bagatelle Road. Lunuganga is a distant retreat, an outpost on the edge of the known world, a civilized garden within the larger wilderness of Sri Lanka, transforming an ancient rubber estate into a series of outdoor rooms that evoke memories of Sacro Bosco and Stourhead. The town house, in contrast, is an introspective assemblage of courtyards, verandahs and loggias, created by knocking together four tiny bungalows and adding a white entry tower that peers like a periscope across neighbouring rooftops towards the distant ocean. It is a haven of peace, an infinite garden of the mind, locked away within a busy and increasingly hostile city. Throughout its long and colourful history Sri Lanka has been subjected to strong outside influences from its Indian neighbours, from Arab traders and from European colonists, and it has always succeeded in translating these elements into something new but intrinsically Sri Lankan. Bawa has continued this tradition. His architecture is a subtle blend of modernity and tradition, East and West, formal and picturesque; he has broken down the artificial segregation of inside and outside, building and landscape; he has drawn on tradition to create an architecture that is fitting to its place, and he has also used his vast knowledge of the modern w orld to create an architecture that is of its time.

Since Bawa started his career, Sri Lanka’s population has almost tripled, while its communities have been fractured by bitter political and ethnic disputes. Although it might be thought that his buildings have had no direct impact on the lives of ordinary people, Bawa has exerted an influence on the emerging architecture of independent Sri Lanka and on successive generations of younger architects. His ideas have spread across the island, providing a bridge between past and future, a mirror in which ordinary people can obtain a clearer image of their own evolving culture. 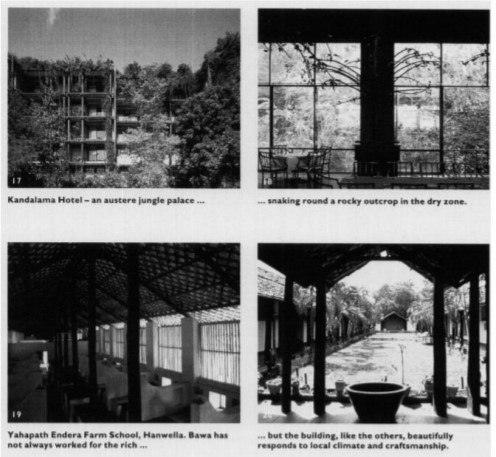 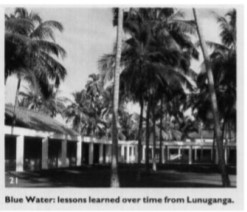