Situated in close proximity to *Kuruwita about 90 kilometers from Colombo, Batadombalena Cave is the home of the prehistoric *‘Balangoda Man’ (Homo sapiens balangodensis) where        the Caves reveal a significant landmark in human paleontology, the remains of prehistoric man.

Situated below the rainforests of *Adam’s Peak, Batadombalena Cave is an archeological treasure trove.

The Caves are located behind a gently cascading waterfall, a mesmerizing site. From the summit of the rock, a thin sheet of water similar to a bridal veil falls into an abyss directly in front of the ledge. This flimsy silver curtain almost shields the entrance to Batadombalena Cave creating a mesmerizing scene with the soft breeze of the wind. When viewed from the Caves, the view of the valley below is spectacular.

There are three caves in Batadombalena Cave. The three caves are large and airy and spread out along the rocky face. The largest cave has an opening 18 meters wide and 15 meters high. The floor of the Cave is covered with ancient shells of tree snails which had been Balangoda Man’s diet. There is a large archaeological excavation pit at the opening of the largest cave.

There is a small grove of banana trees in front of the caves and according to locals, these trees were a part of the diet of the hermits who had lived in Batadombalena Cave as one of the caves had been converted as a Buddhist Hermitage by enclosing the opening of the cave with a wall. There is also a low stone bench and a sleeping platform of granite blocks inside this cave.

According to a study conducted by the University of Oxford in 2015, teeth that were found in Batadombalena Cave revealed a significant discovery; Isotopes in Balangoda Man’s teeth indicated a diet that was based on food from the nearby rainforest. According to scholars, humans might have dwelled in the vicinity as early as 45000 years ago. Earlier research indicated that modern humans did not colonize the rainforest until 8000 years ago, after the end of the Pleistocene Period. Scholars were also of the view that jewelry made of seashells and shark teeth as well as sea salt that were found inside the Cave indicate that Balangoda Man had constant contacts with the coast situated about 40 kilometers away from Batadombalena Cave.

In 1930s, skeletal remains of human adults and a child were found in the Batadombalena Cave. In 1981, Mr. P.E.P. Deraniyagala, a paleontologist and zoologist (father of former Commissioner of Archaeology, Dr. S.U. Deraniyagala) along with his team unearthed complete skeletons which they estimated were around 16000 years old.

During the excavations, long triangular trapezoid and circular pieces of flint were unearthed. These had been the tips of hunting weapons, spears and arrows. They were also the earliest evidence of the use of tools by modern humans apart from those found in Africa.

According to scholars, Fa Hien-lena has yielded the earliest evidence (at ca. 37,000 BP) of anatomically modern man in South Asia followed by Batadomba-lena around 31000 and 18000 BP and Beli-lena around 16000 BP. These facts have been confirmed as these human remains have been subjected to detailed physical anthropological studies.

According to Dr. S. U. Deraniyagala, former Director General of Archaeology, Sri Lanka:

“The tool kit of Balangoda Man is distinguished by the occurrence of geometric microliths, comprising small (less than 4 cm long) flakes of quartz and (rarely) chert fashioned into stylised lunate, triangular and trapezoidal forms (ibid:266-70,688-94). Such geometric microliths have been traditionally considered the hallmark of the Mesolithic Period as first defined in Europe. The earliest dates for the geometric microlithic tradition in Europe are around 12,000 BP. Hence it came as a surprise when such tools were found as early as 31,000 BP at Batadomba-lena, 28,000 BP at two coastal sites in Bundala and over 30,000 BP at Beli-lena. Sri Lanka has yielded evidence of this sophisticated technological phase over 19,000 years earlier than in Europe. However this apparent anomaly has been resolved by the discovery of geometric microliths in various parts of Africa, such as Zaire and southern Africa, from contexts in excess of 27,000 BP, thereby suggesting that Europe was late in manifesting this techno-tradition due to as yet undefined reasons”. 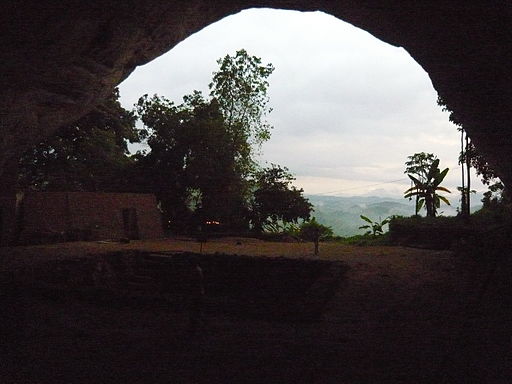 According to archaeologists, there have been human settlements in Sri Lanka dating back to over 25000 years. The ape man Balangoda Manawaya (Balangoda Man) has lived in many caves including Beli Lena Cave in *Kitulgala, Batadombalena Cave near *Kuruwita, Bellan-Bendi Pellessa near *Embilipitiya as well as in Pahiyangala Cave (also known as Fa-hien Cave) in Yatagampitiya in *Kalutara.

The prehistoric remains of Batadomba Lena had been studied at the Cornell University, USA too.

As Batadombalena Cave is a significant milestone in Sri Lanka’s cultural heritage, the Department of Archaeology has named the Cave as an Archaeological Reserve.

Directions: Colombo-Ratnapura-Kuruvita-turn to Erathna Road (the road which leads to Adam’s Peak), proceed two kilometers, there is a signboard marked with the turnoff to Batadombalena Cave (a vehicle has to be parked at this point and walk up to the Cave). After almost one kilometer, the terrain rises up to a height of around 260 meters through rubber and tea plantations.